Here’s the final instalment of my travel diary series for my October trip. It’s taken me ages to get through processing these posts but I’m so glad I’m done and finally able to share with you all now! After spending two weeks exploring South Africa we flew on over to Mauritius for a relaxing week of sunshine and chilling out.

As usual, we opted for an AirBnB, this time a private villa with our very own pool! For those of you yet to use it – here’s a discount code. 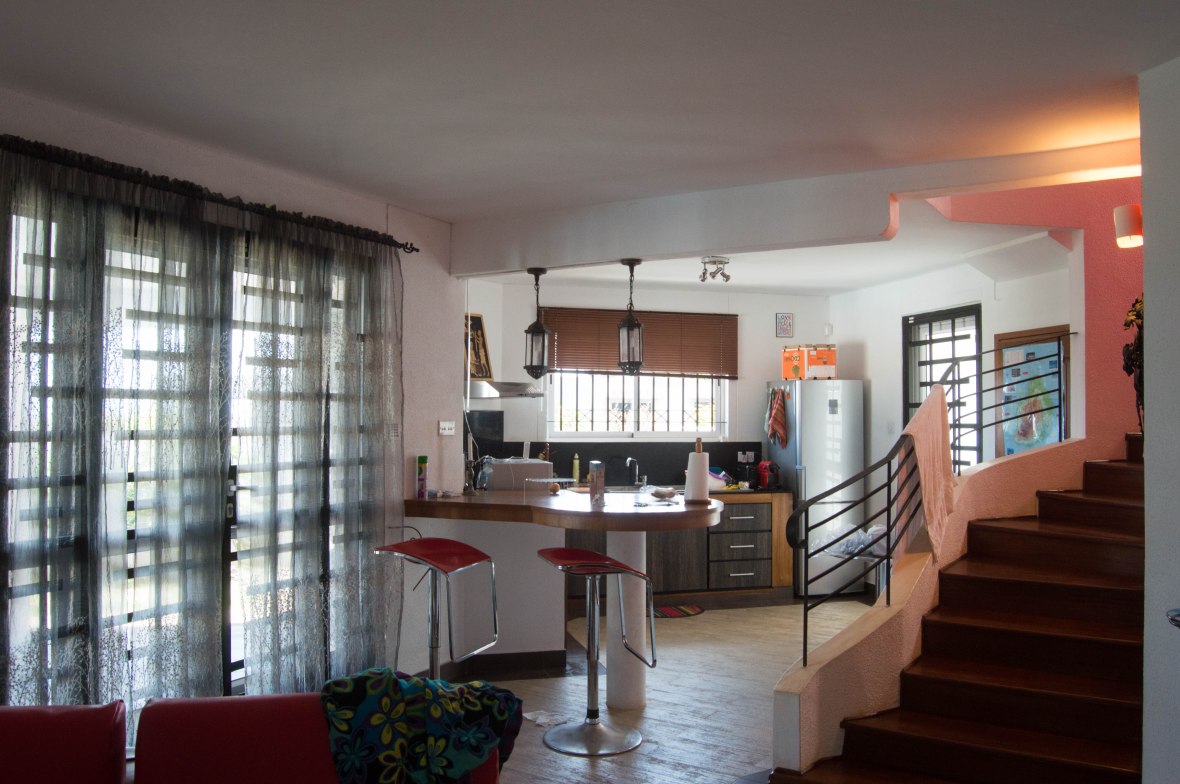 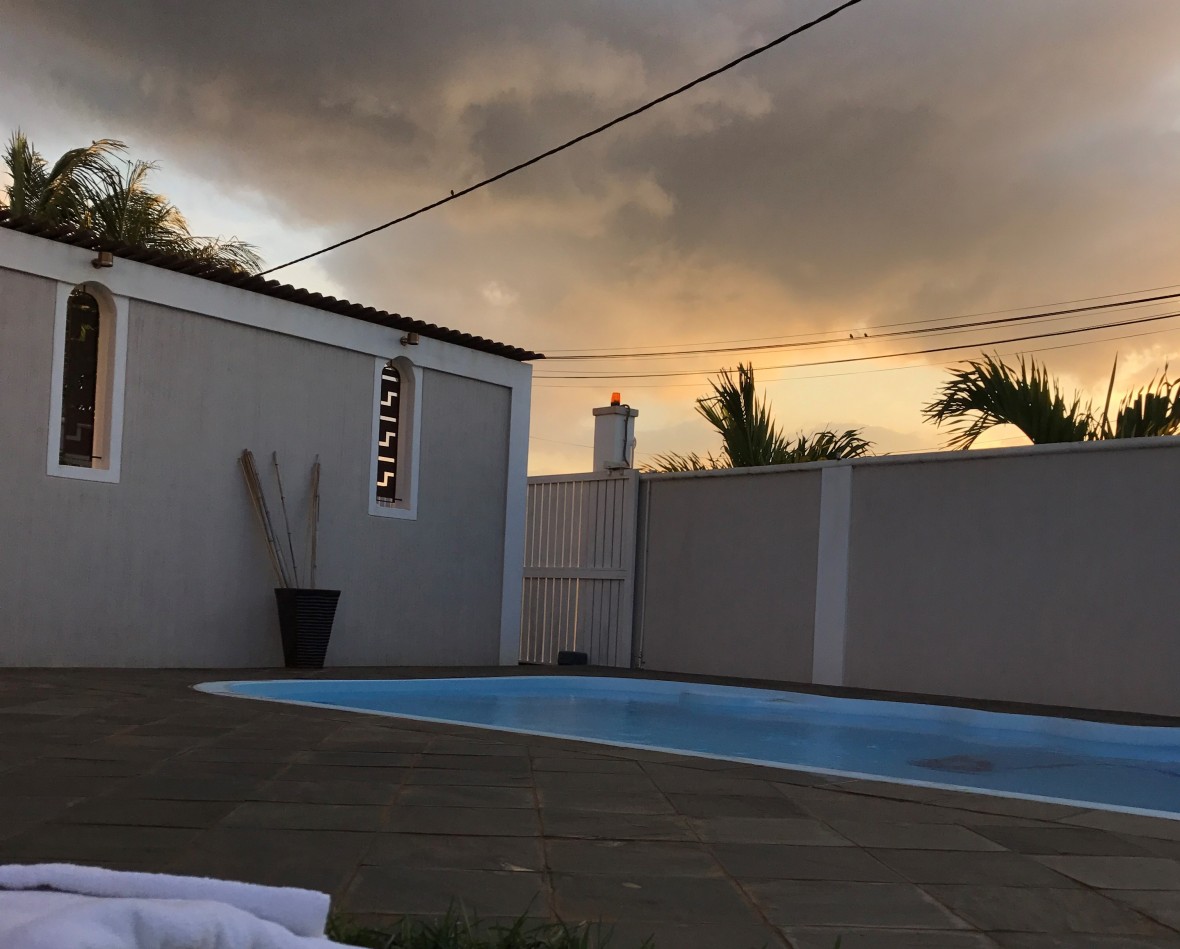 Coming from London to a small tropical island, you realise very quickly that a car is the best way to go – we hired one from the get go and I would encourage anyone to do the same, well, provided you can drive (I definitely can’t, but I’m mulling it over as a new year’s resolution). Having a car just means you’re so much more flexible than the alternative in being restricted to the infrequent bus arrivals/hiring a taxi for the day. They drive on the same side of the road as us here in the UK, so that’s another perk.

If you needed convincing further, roadside views are immense:

Okay – first up, beaches. Let’s be honest, tropical island beaches are pretty dreamy. In Mauritius, all beaches are theoretically public, however, large resorts have set up camp and unofficially called dibs on the better ones, so if you’re really after a beach bum break, it might be wise to avoid the Airbnbs and head straight for one of these. The North of the island is a lot more tourist friendly with calmer seas, whereas the South is a little more rugged and the waves are rougher, so better for surfing. 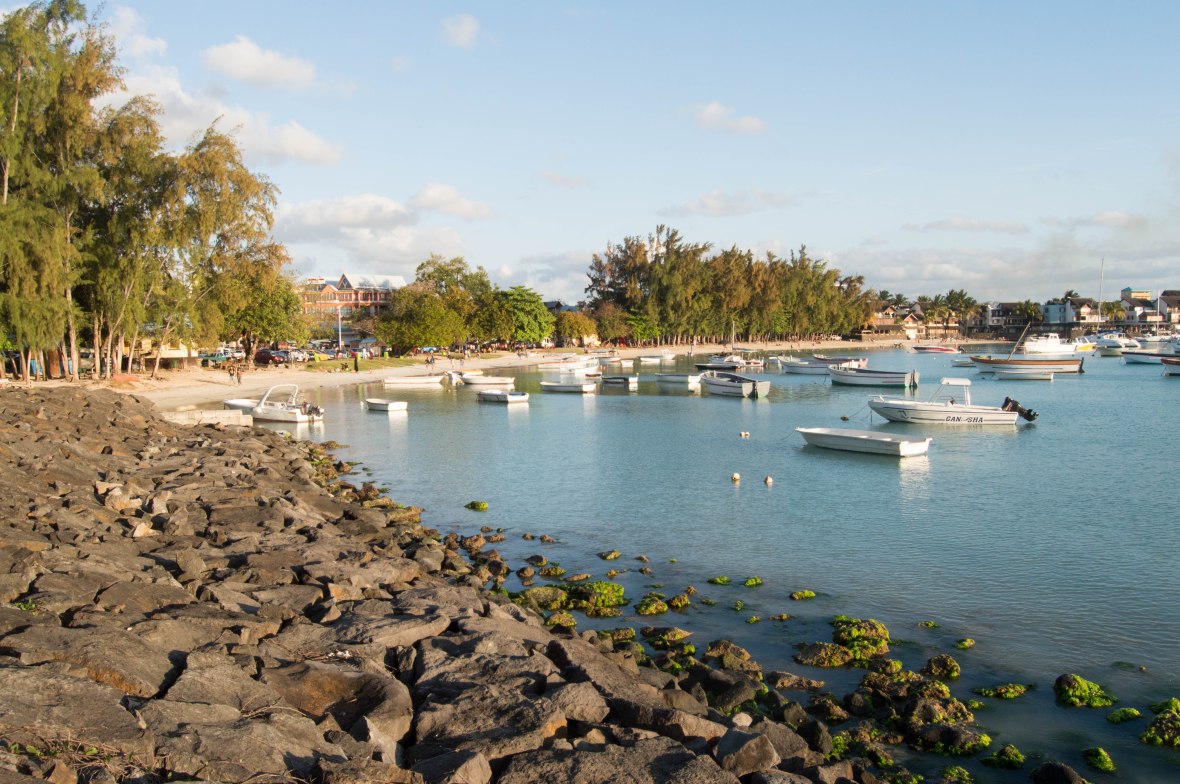 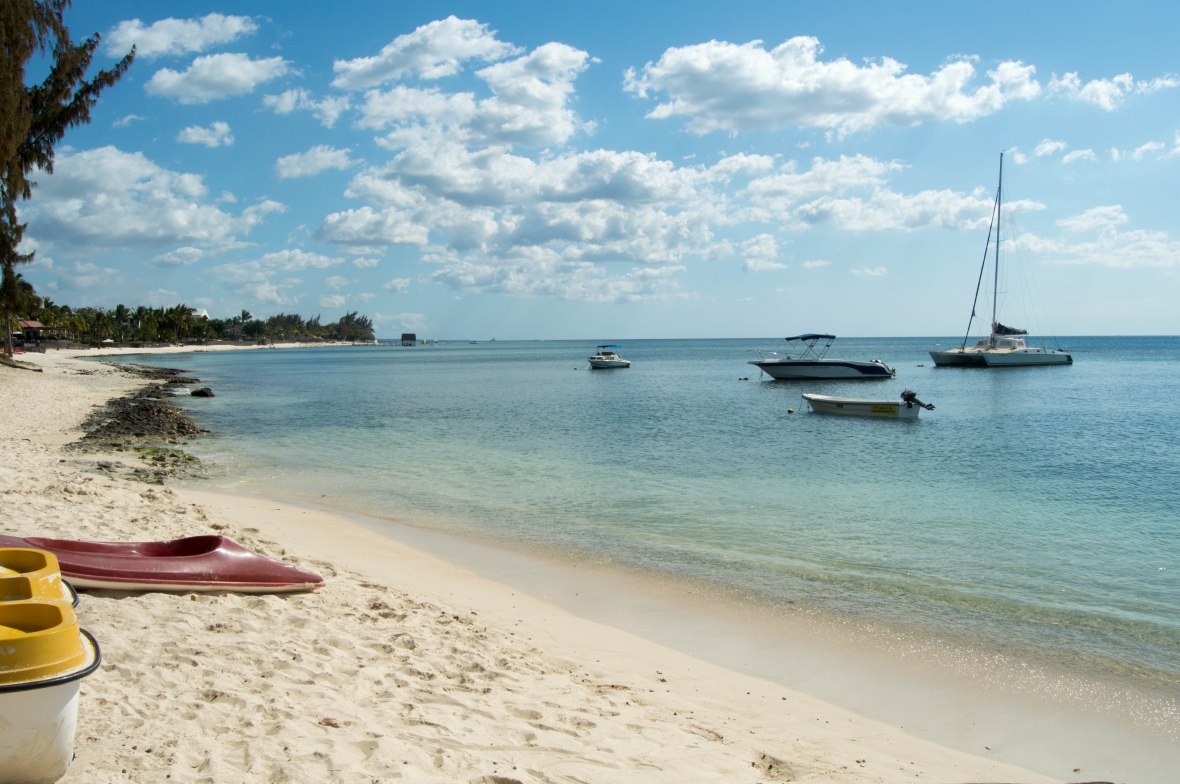 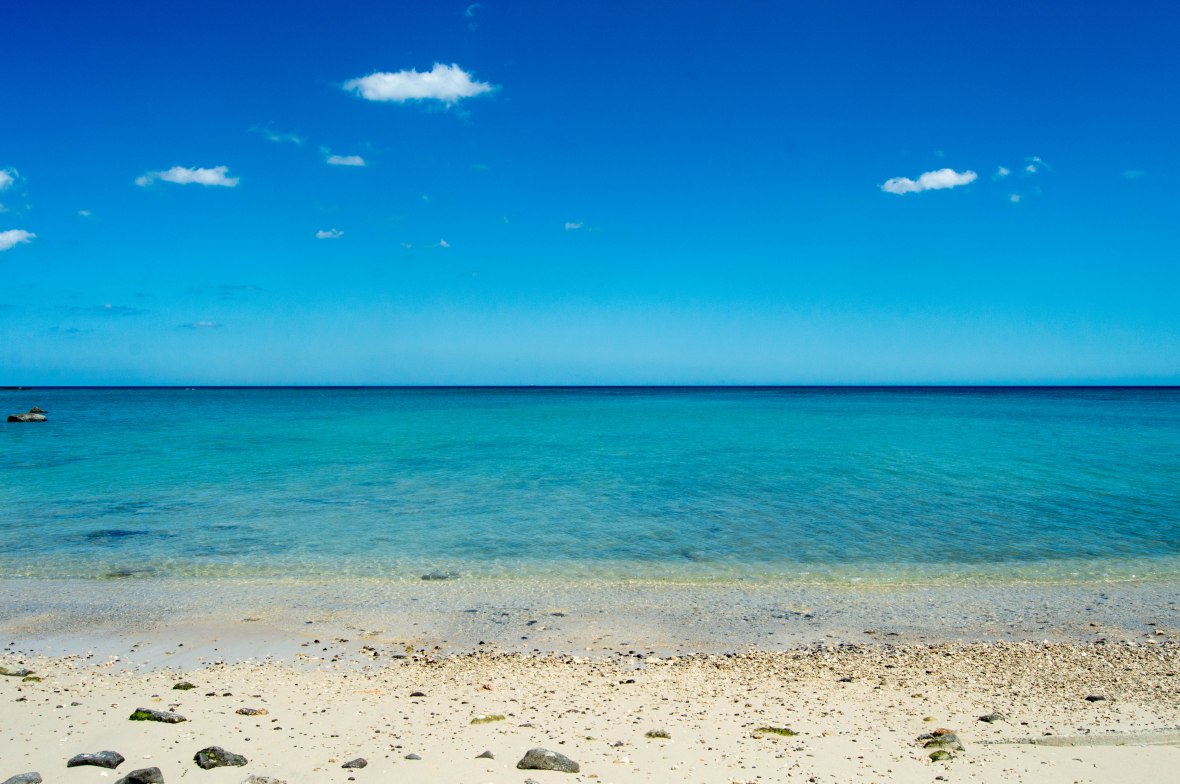 Aside from the practicality of it, driving around the island is pretty magical. We took two days out and drove around the entire coast, stopping at random intervals… 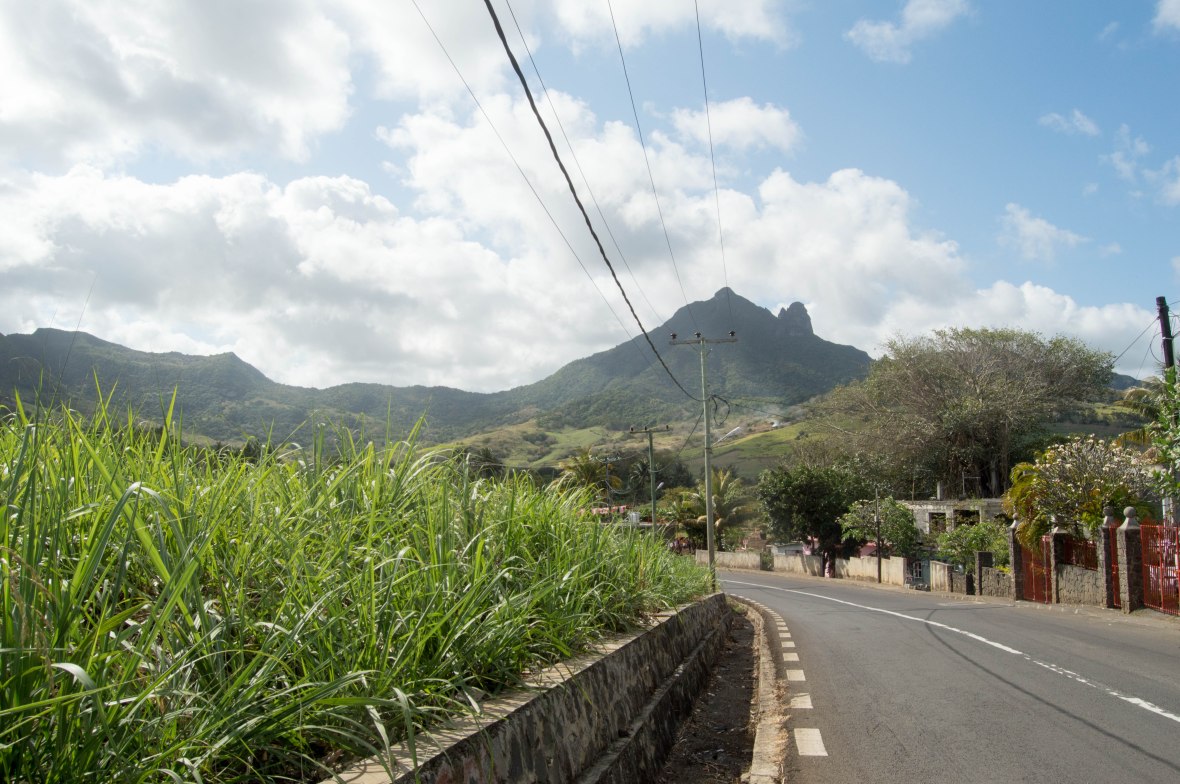 Sugarcane fields are everywhere, they grow so tall, sometimes when you’re driving around it’s like there are two big green walls on either side! 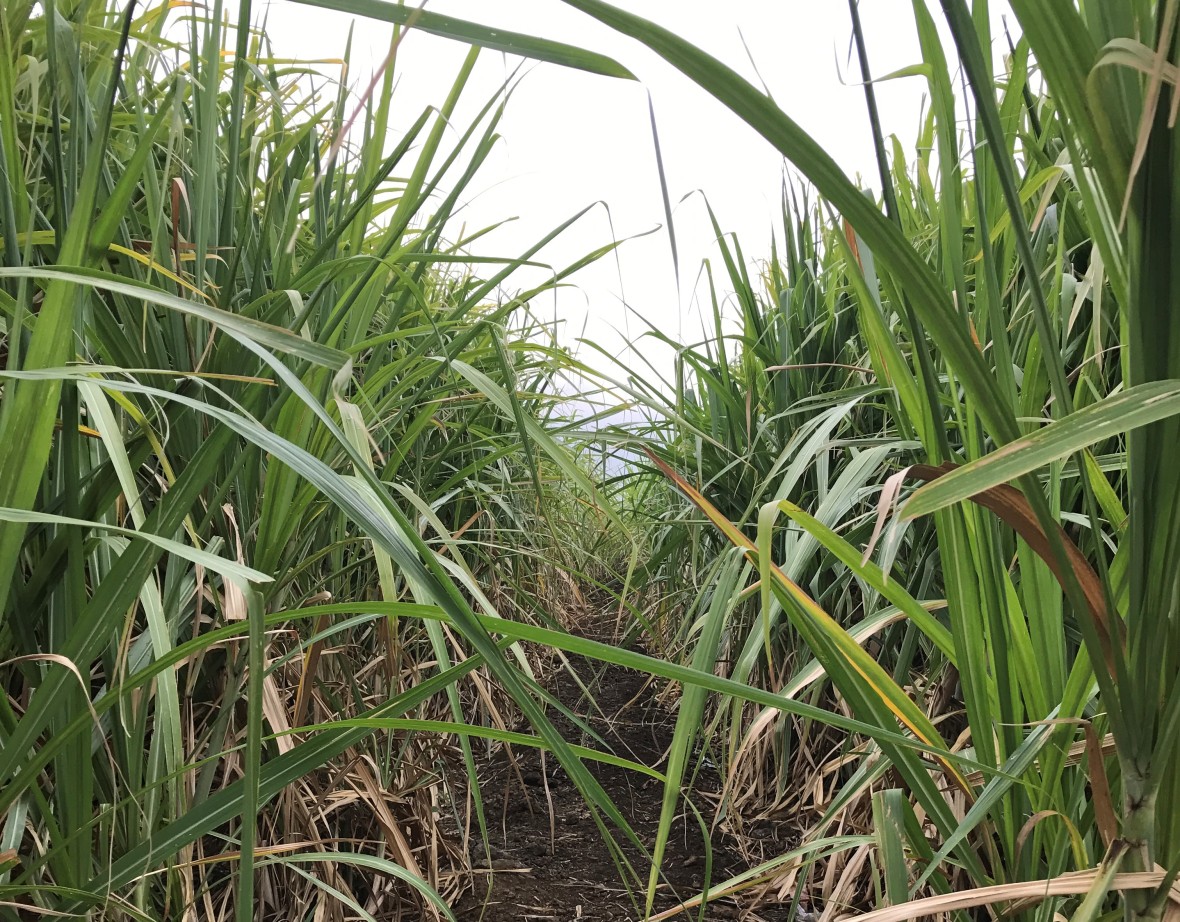 On the left, you can see they’ve grown quite tall. The field on the right has just been harvested.

Ahhhh. Why did I come home?!

Sea salt pans – it’s a shame that we couldn’t see the workers in action /pay a visit. 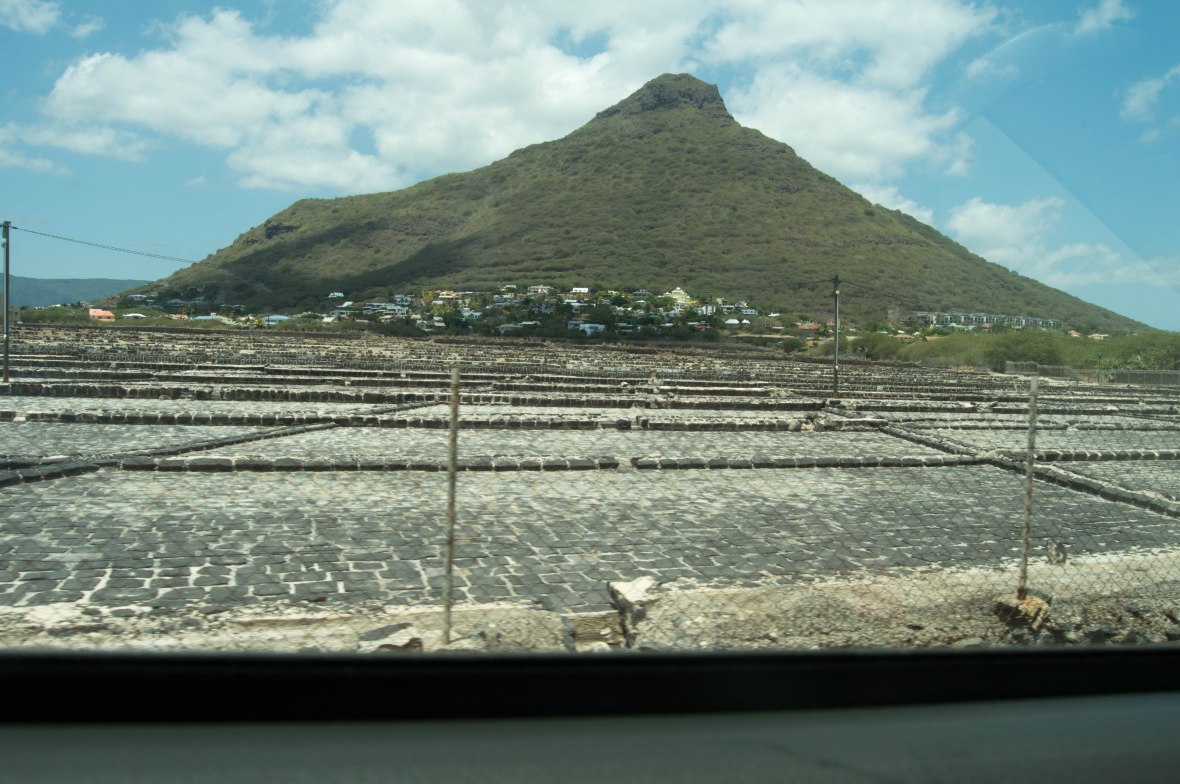 ^The bus stop in this picture makes me chuckle.

Located in Pamplemousse, this is the oldest botanical gardens in the Southern Hemisphere and a great place to stop for a long walk and stretch your legs. It’s best known for its giant lily pad pond but, unfortunately, it looked like it had seen better days on our visit, so instead, here are some other pics:

They offer paid for guided tours where you learn about the history of the gardens and the various plant species it’s home to, but we opted to skip it.

^ I love the detail in this shot.

This tree is so cool with roots hanging from its branches like it’s something straight out of The Jungle Book.

Having had booked over the phone earlier in the day, we arrived a little early at this beautiful, serene location and just went for a little stroll. 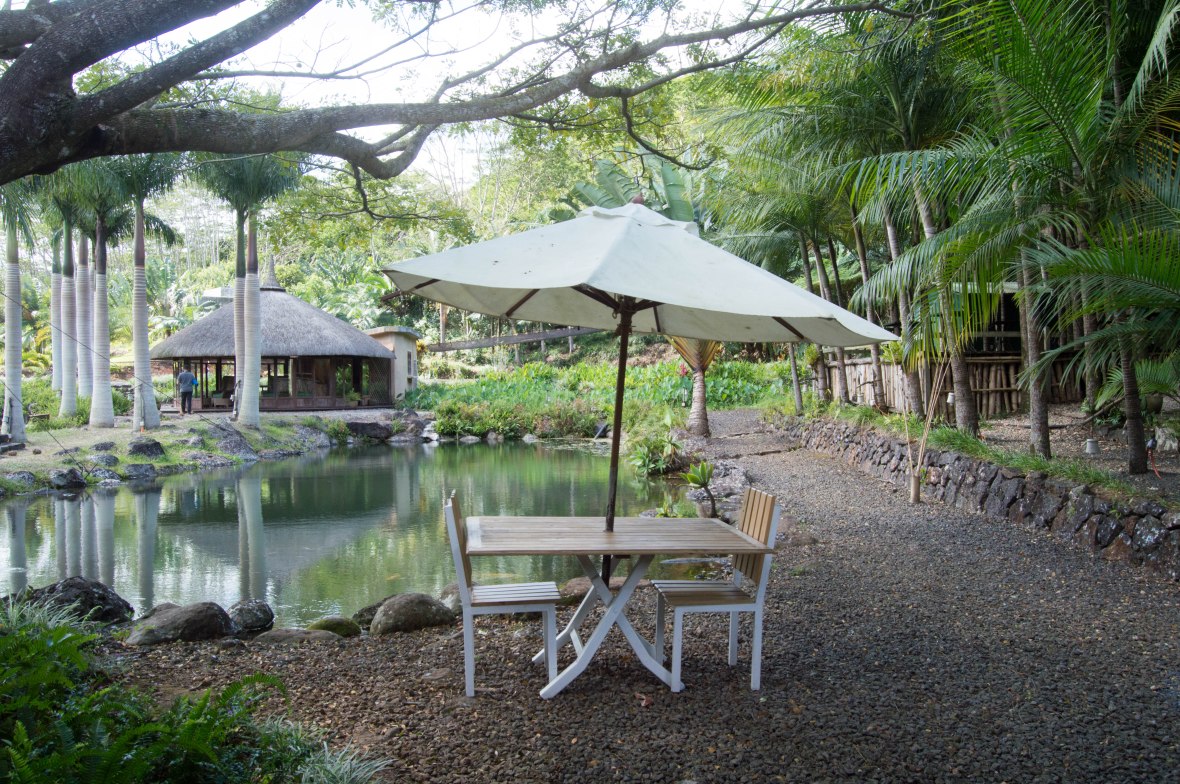 Definitely chilled out on the hammocks for a bit! 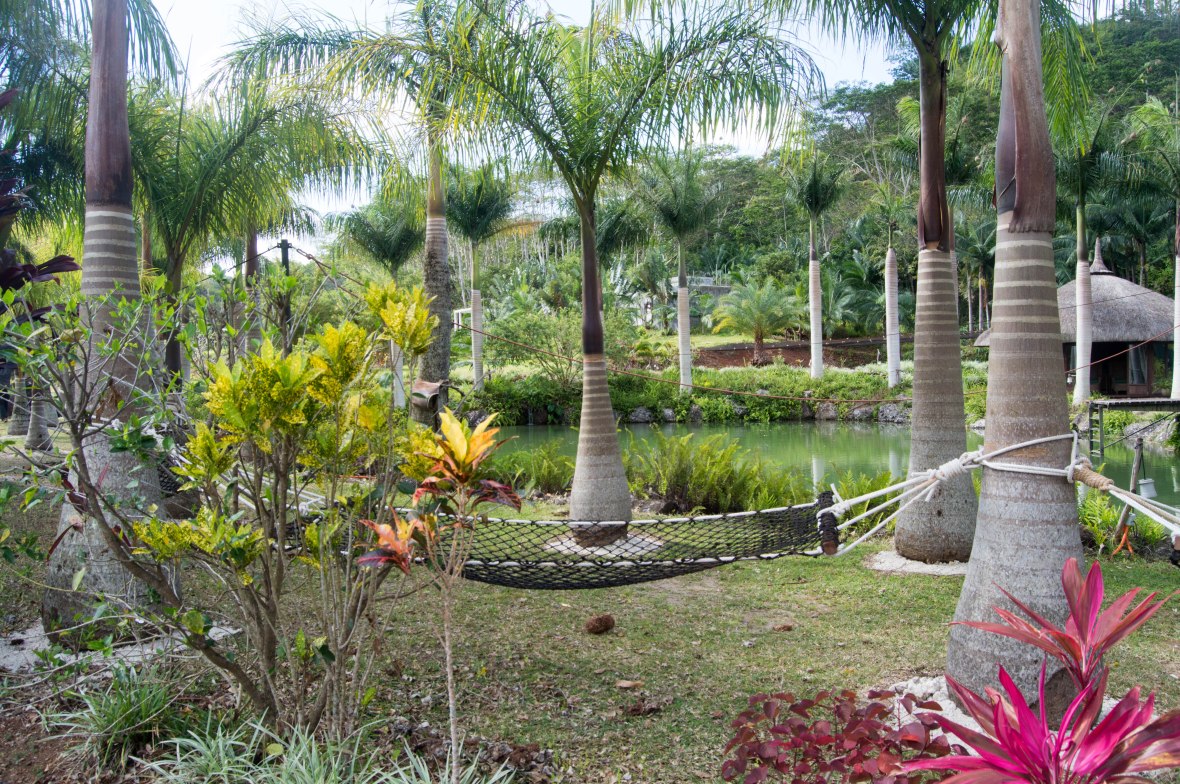 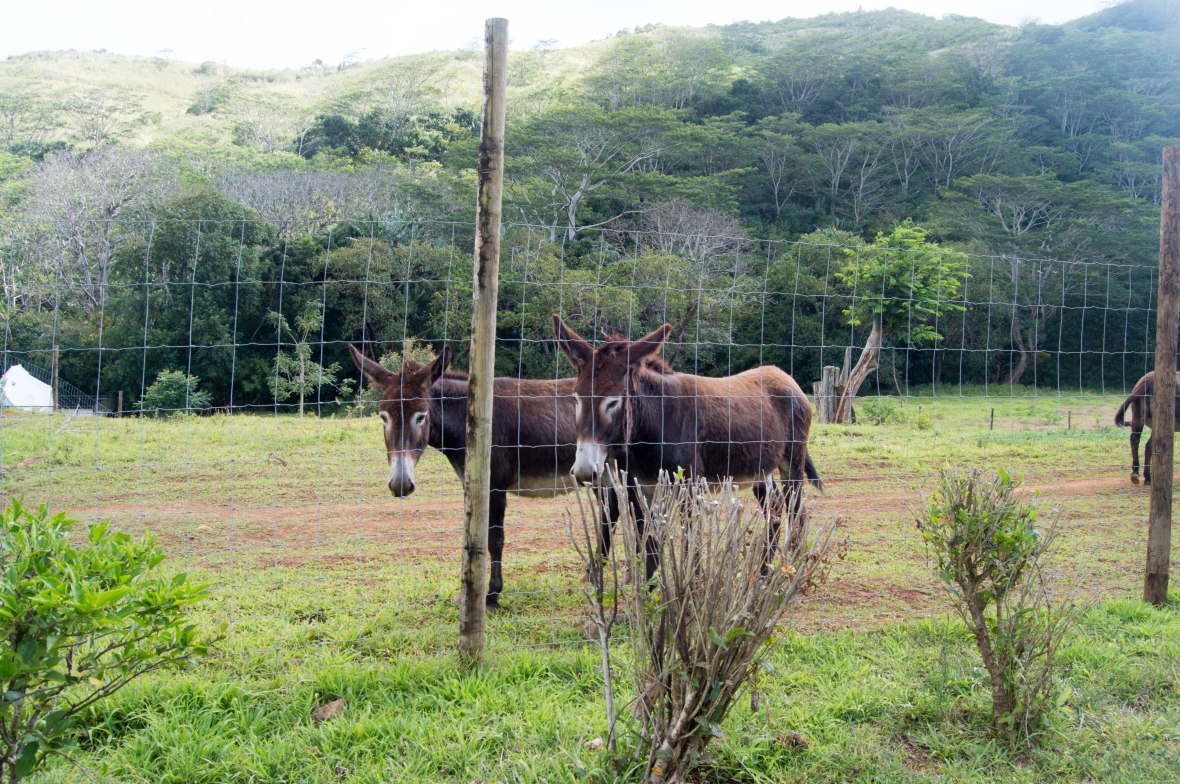 After being lulled into a false sense of security, it was time to hit the ropes – all six of them. Let me be completely honest – it was freaking terrifying! I think I asked our instructors about 100 times if it was safe and whether they could promise I’d make it to the other side… I scored about -4387985 on the coolness scale.

But once I’d finally summoned up the courage and bravery to take the leap it was exhilarating. You feel kinda like Tarzan, swinging through the trees (although, he was probably a tiny bit more graceful than me and probably wasn’t petrified or clinging on for dear life the entire time.)

This nature park is located in the South of the island and is home to an array of animals. Highlights for me were the crocs and giant tortoises. 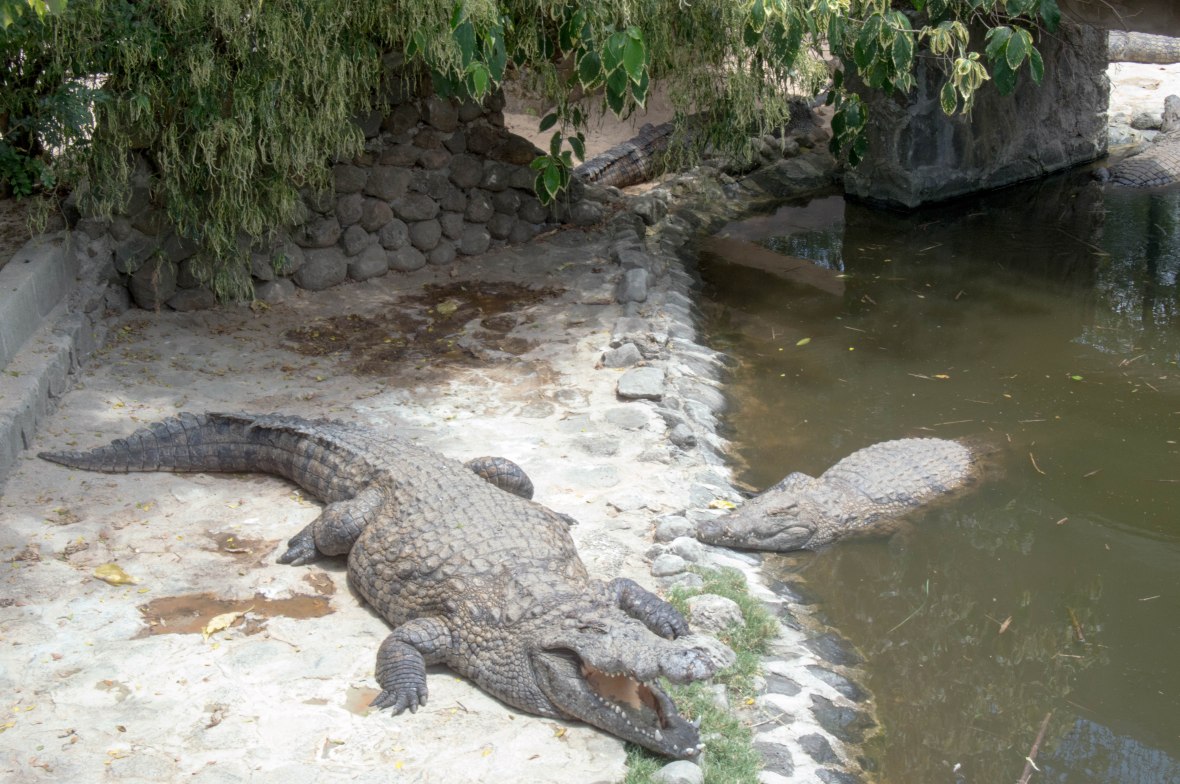 This place is home to 2000 crocodiles and I’d definitely recommend you plan ahead to catch the feeding session… They attach a plucked chicken to a washing line type rope and slowly let it down, often bouncing it along and pulling it up out of reach to tease the crocs.

It’s crazy how far out they can propel themselves and how they thrash about trying to catch their dinner.

Here are a couple of vids:

You can also walk around amongst giant tortoises, the pics I’ve taken definitely do not do their size justice, they are HUGE! The biggest ones are easily twice my size! They are the cutest things ever, well, second probably to the penguins in South Africa. 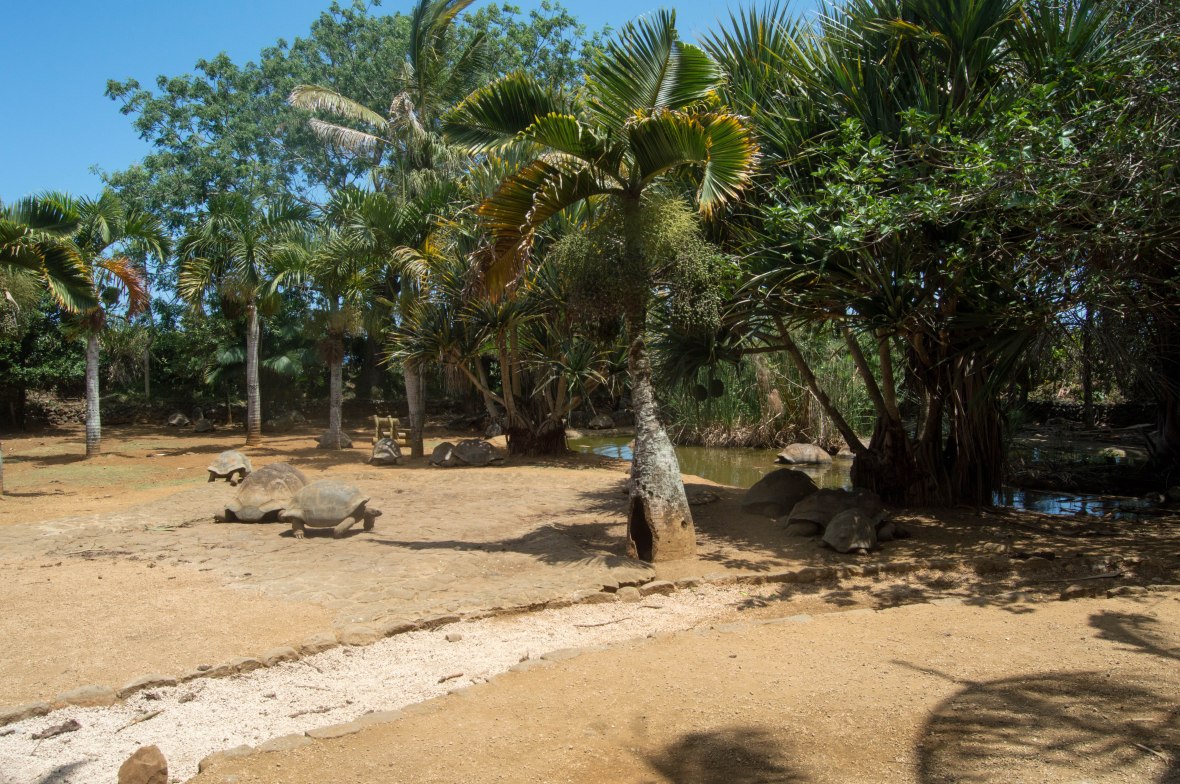 You can buy branches to feed them too, may or may not have gone back about 8 times to buy more!!!! 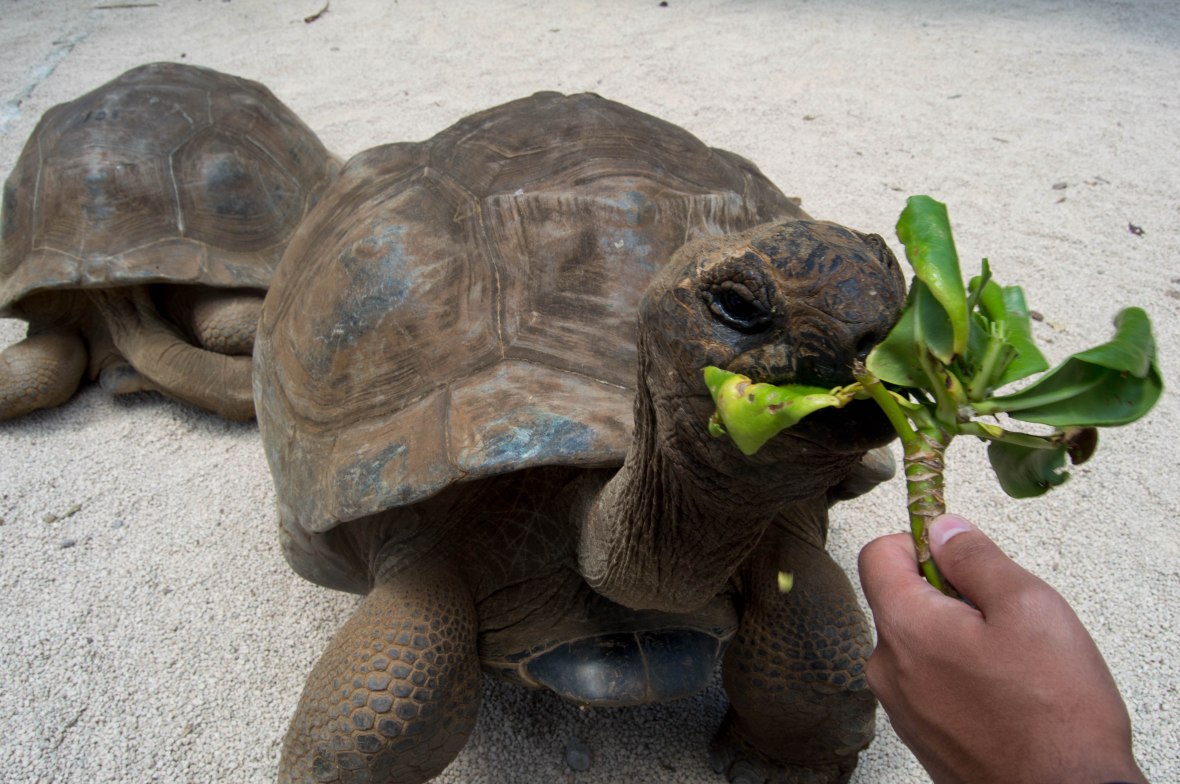 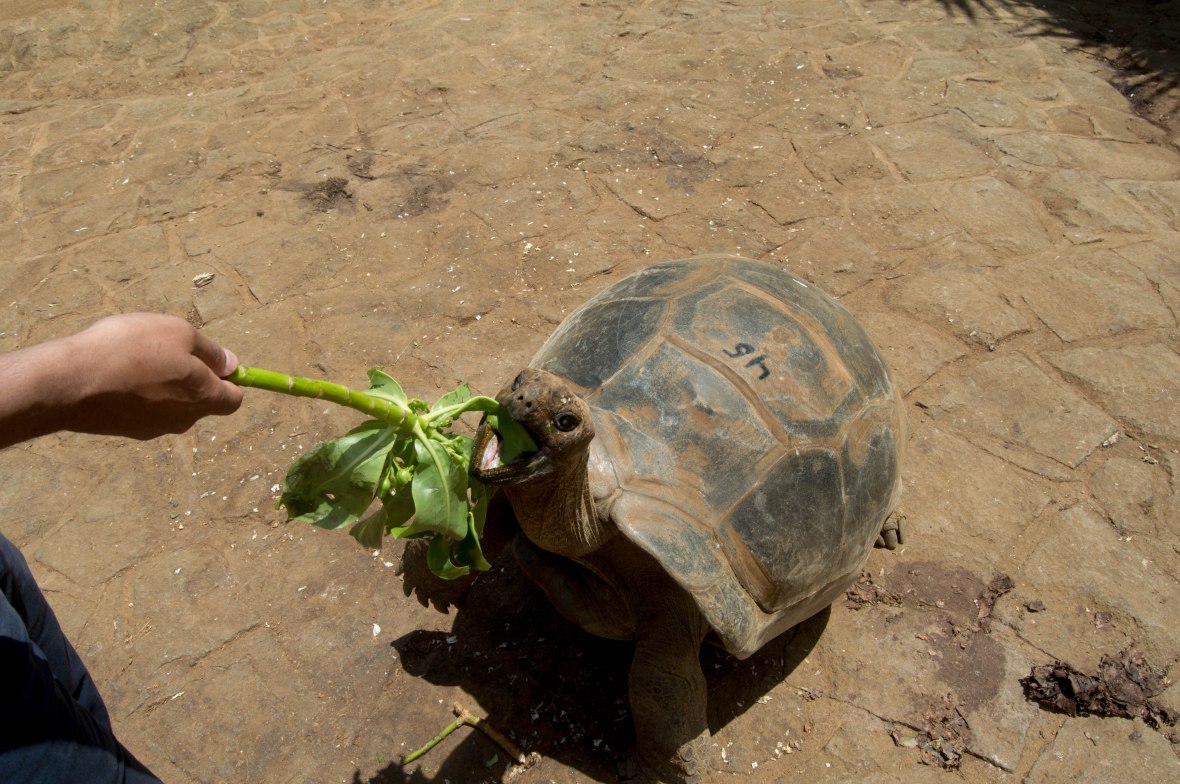 And it’s impossible not to experience the cuteness overdose when you see the baby tortoises, they’re so tiny! It’s crazy to think, these little guys will probably grow to twice my size and outlive me too… 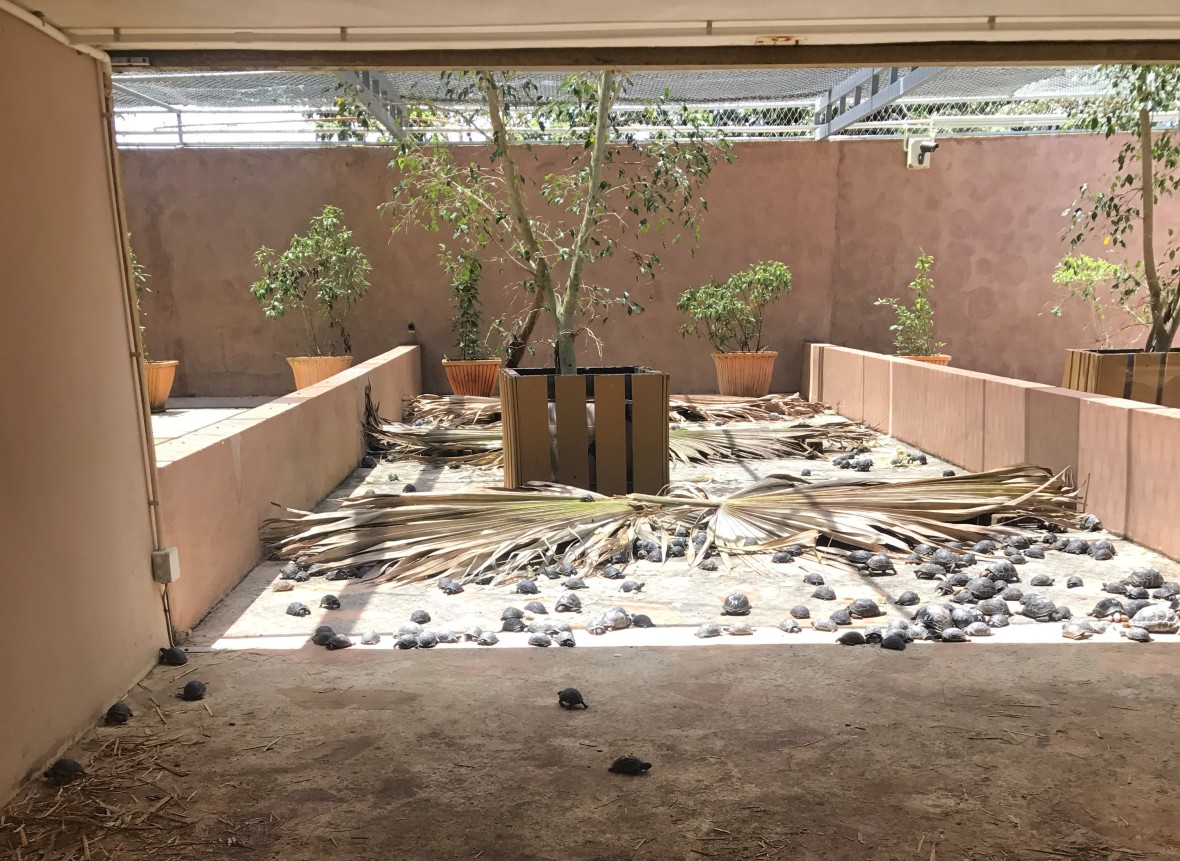 Check out this cutie: This is an 80m deep dormant volcano, located in Curepipe. To be honest, there wasn’t an awful lot to see looking in.

However, the view over the island from the top was really nice:

This is a former sugar factory turned museum. You’ll learn everything from the history of Mauritius right through to how sugar is produced. You can also sample the various types of sugars which are produced.

These are an undulating geological sand formation with seven distinct colours. Apparently, if you collect some of these coloured sands and try and mix them up, they will gradually separate back out. 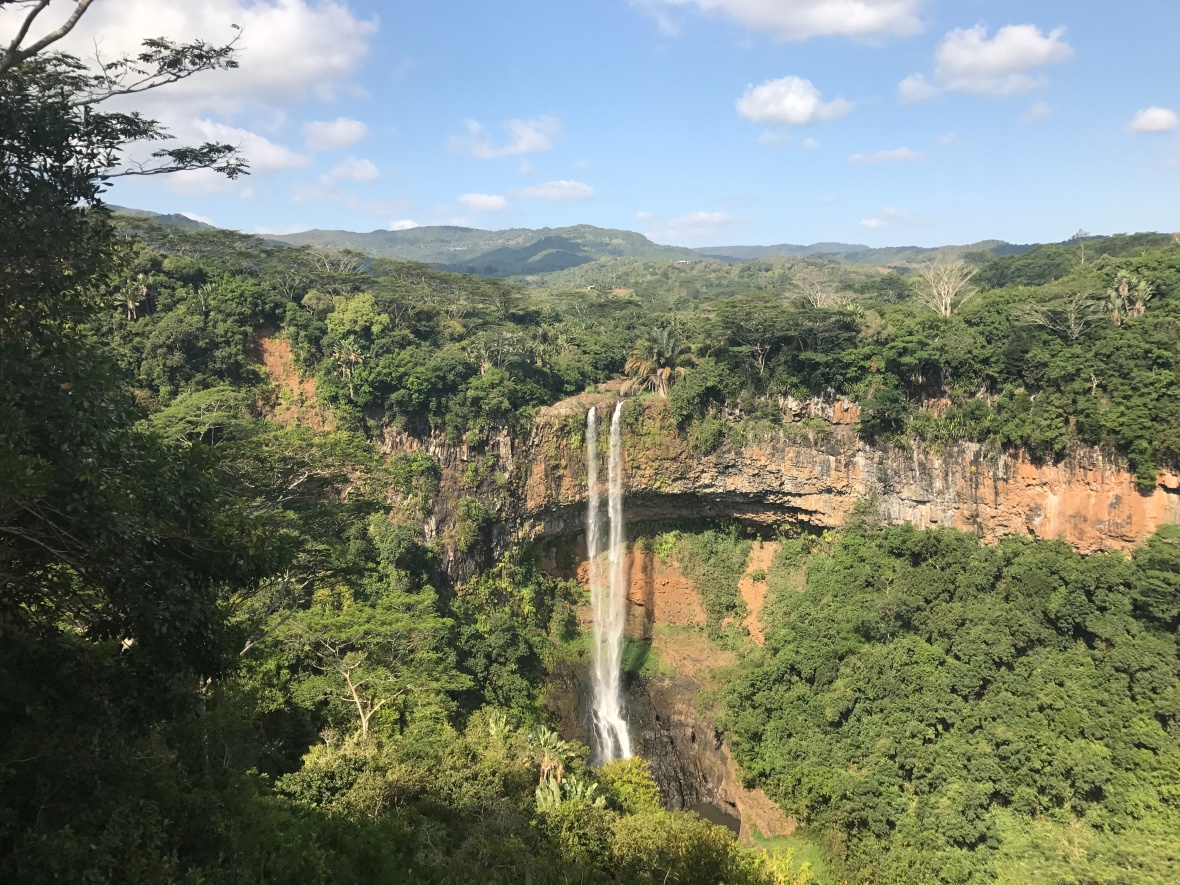 As we were driving by, we stopped at this factory, where, for generations,  they have been producing traditional vegan cassava biscuits. To this day, the process is manual, even the wrapping of the finished biscuits is done by hand.

I won’t lie, they were good, but not amazing.

This is the island’s capital city and definitely has more of a buzzing vibe than some of the other towns.

There are plenty of shops and markets to explore…

Port Louis is also home to the central market where you can buy anything from fruit and veg through to souvenirs and everything in between. 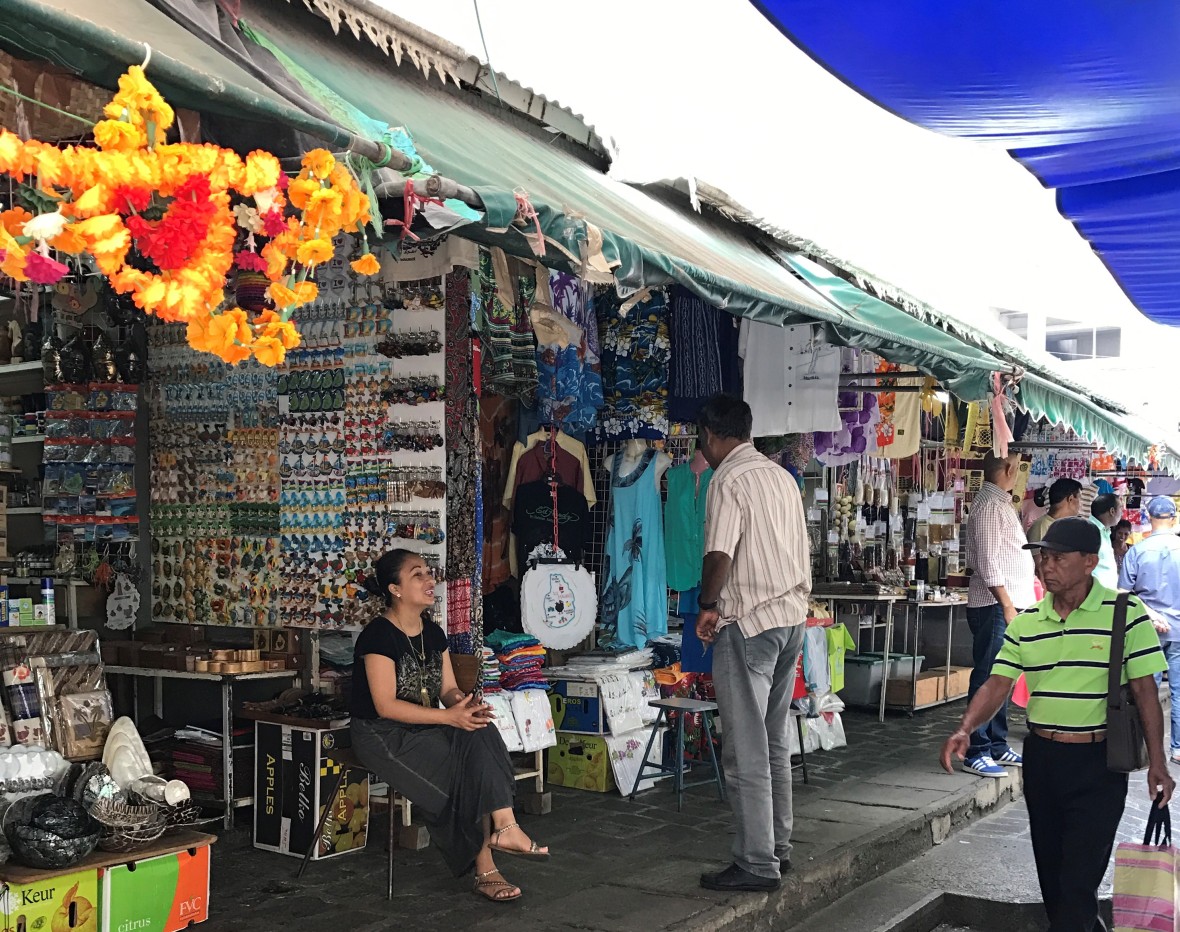 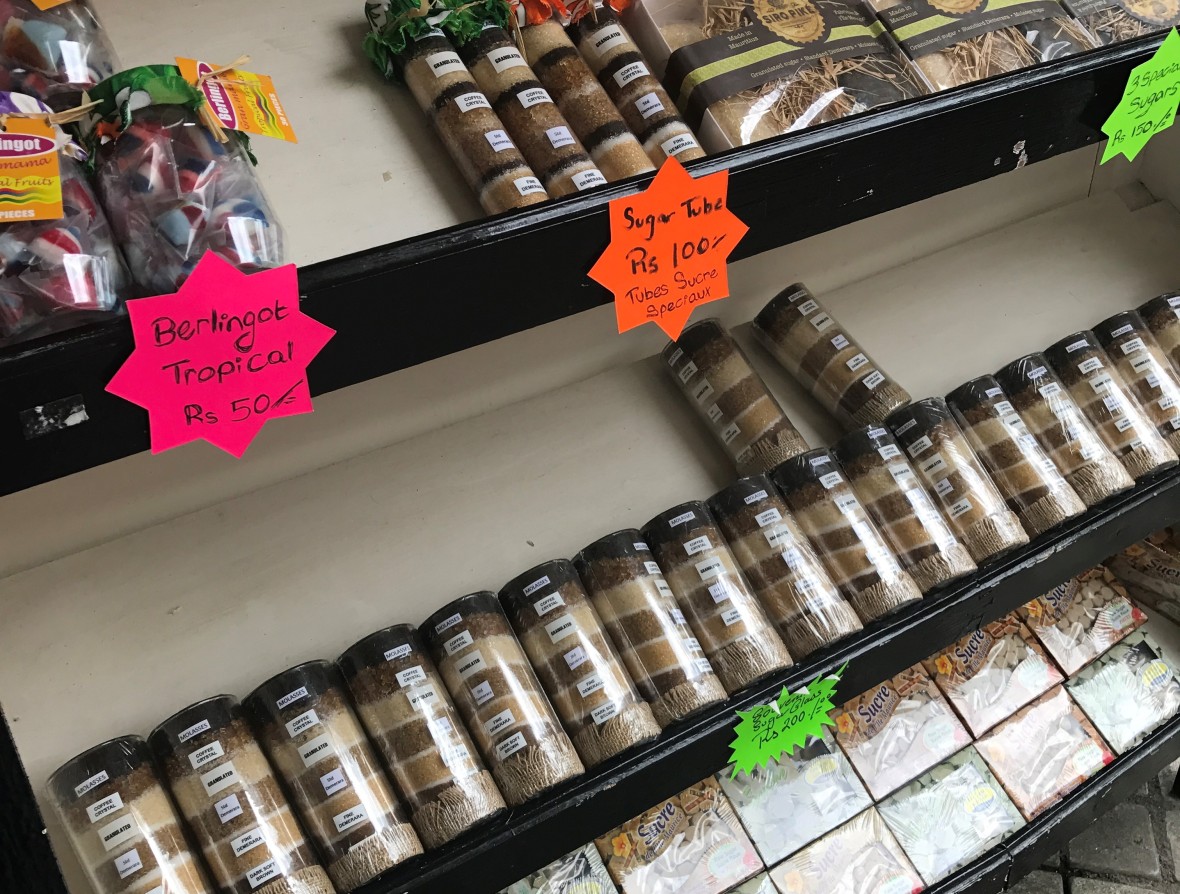 And whilst we’re on food, let’s talk about some of the places we checked out.. 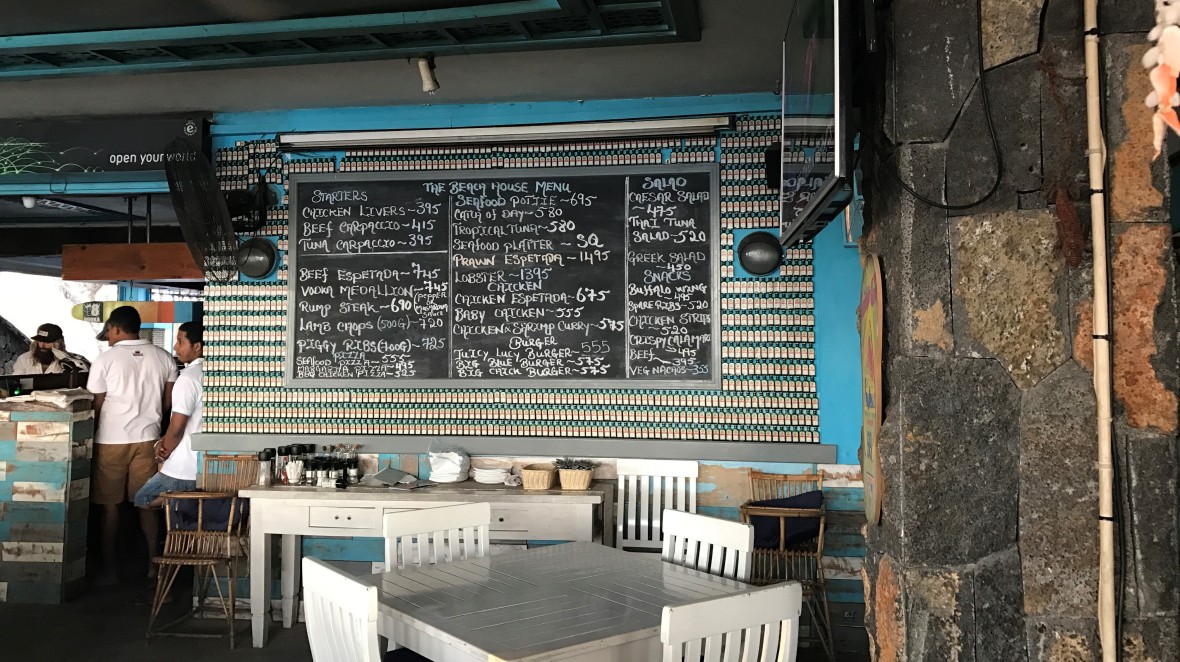 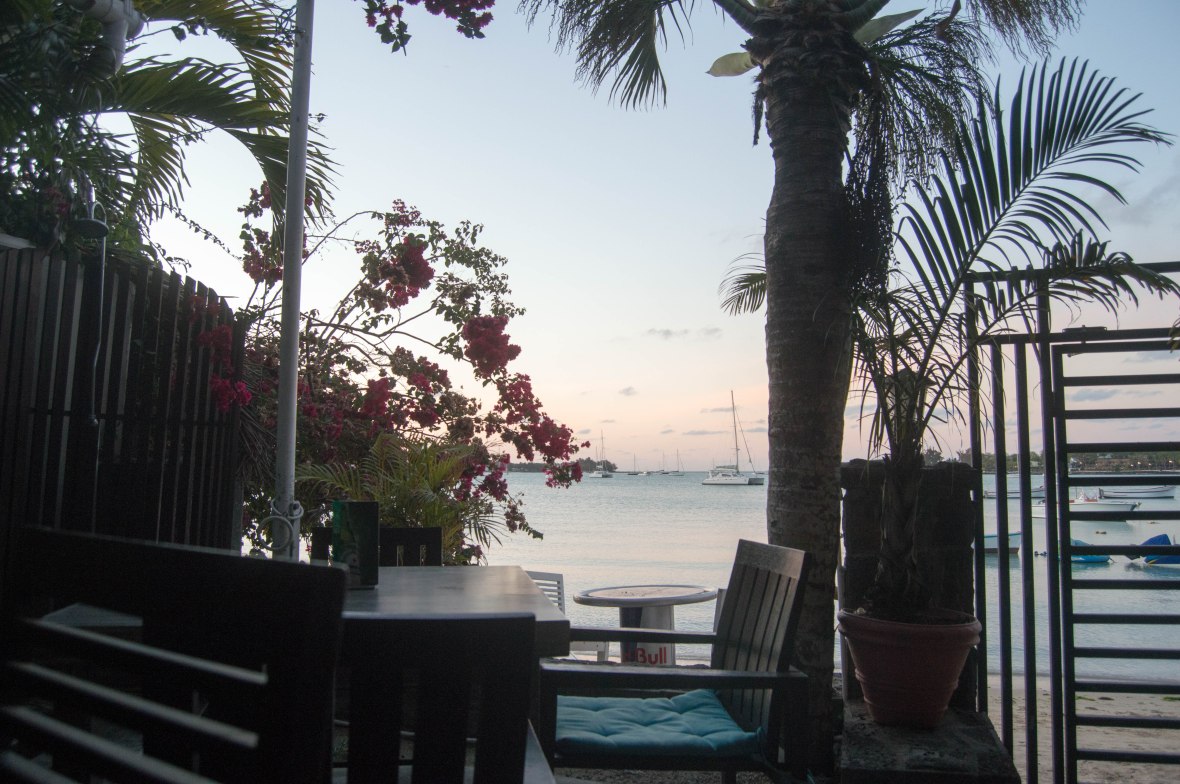 Our drinks arrived quickly and were of a high standard.

In terms of food, I opted for the BBQ chicken pizza whilst Mr Man selected (surprise, surprise!) a burger. Both were decent but nothing mind blowing. Also, I reckon it took at least an hour for the food to actually arrive.

If I were to go back, I’d probably stick to drinks and possibly some nibbles / snacks instead.

Sunset on the beach outside:

This place was so beautiful. The views are spectacular and both the food and service was great too.

I mean, seriously, would you just look at this:

Chicken cooked to perfection in a tamarind sauce (slightly sweet and sour) and served over mashed potatoes with a medley of veg, this was just so delicious. I now really want to buy some tamarind and play around with its flavour profile in the kitchen.

We shared a creme brulee for dessert, which came topped with some ‘apple salsa.’ The flavours worked well together but sadly the overall dish was underwhelming. I feel like most restaurants are such a let down in the dessert department. Sucks.

This is a really nice and fancy restaurant specialising in Chinese food. 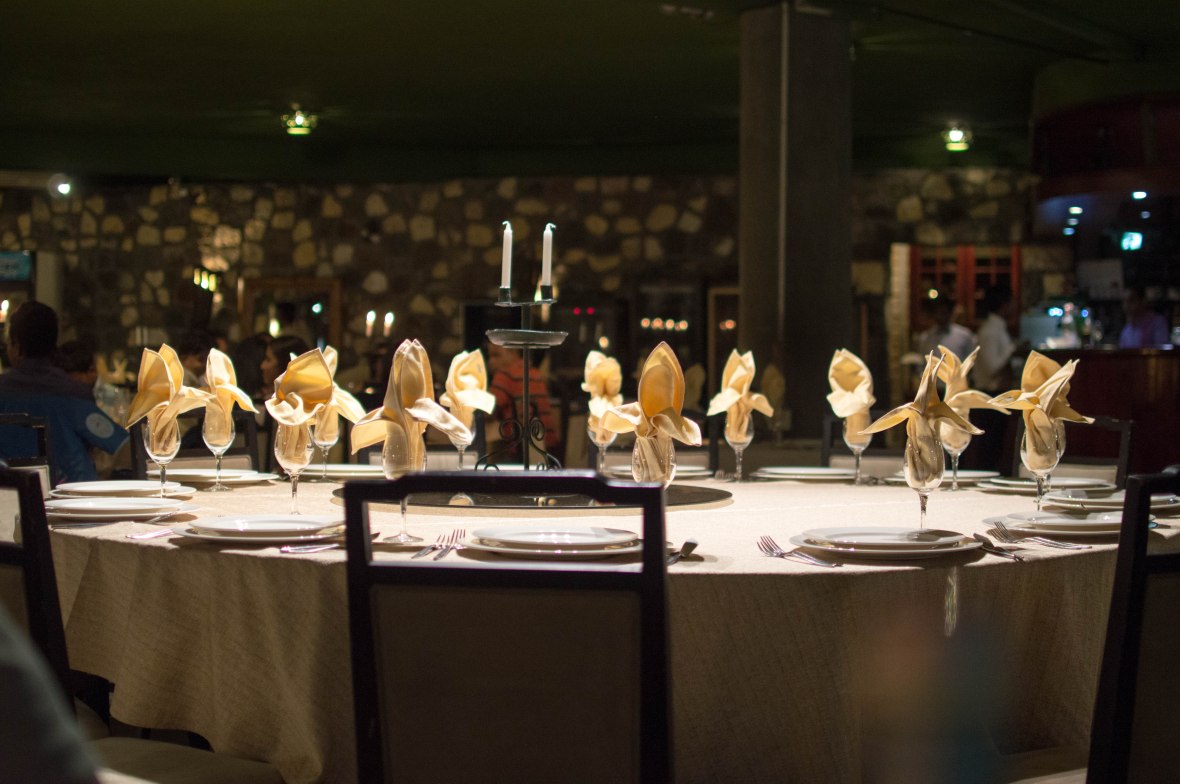 Tip: if you’re coming for dinner, make sure you book in advance and ask to be seated outside for a table like this:

I opted for chicken in a Szechuan sauce with stir fried rice whilst Mr Man picked the beef in black bean sauce with noodles.

All things considered, I thought the food was decent but found the service to be pretty poor. Based on the look and feel of the place, I expected a lot more. However, perhaps we caught them on a bad day.

The Coffee Lounge at Labourdonnais Hotel

Great place to stop for afternoon tea or simply cake and coffee when it’s raining outside, ha!

Love how the coffee comes served in layers – such a nice touch! Someone teach me, how is this even done!? I opted for the chocolate opera cake and Mr Man the coconut and passion fruit something or another. Both were okay – nothing spectacular, unfortunately. Also, the service was a bit rude and abrupt.

Mauritius’ street food has been influenced by generations of African, Indian and Chinese settlers – almost everything we sampled was delicious!

This was probably my favourite of the lot – Mine Frite with chicken. Perfectly stir-fried noodles with plenty of veggies and chicken…

Deep fried snacks – a variety of different flavours and textures – everything from chickpeas through to lentils had been given a coating of batter and deep fried. These were a lot more subtle than the usual pakoras that I’ve tried and came drizzled with chilli sauce to give it a kick. 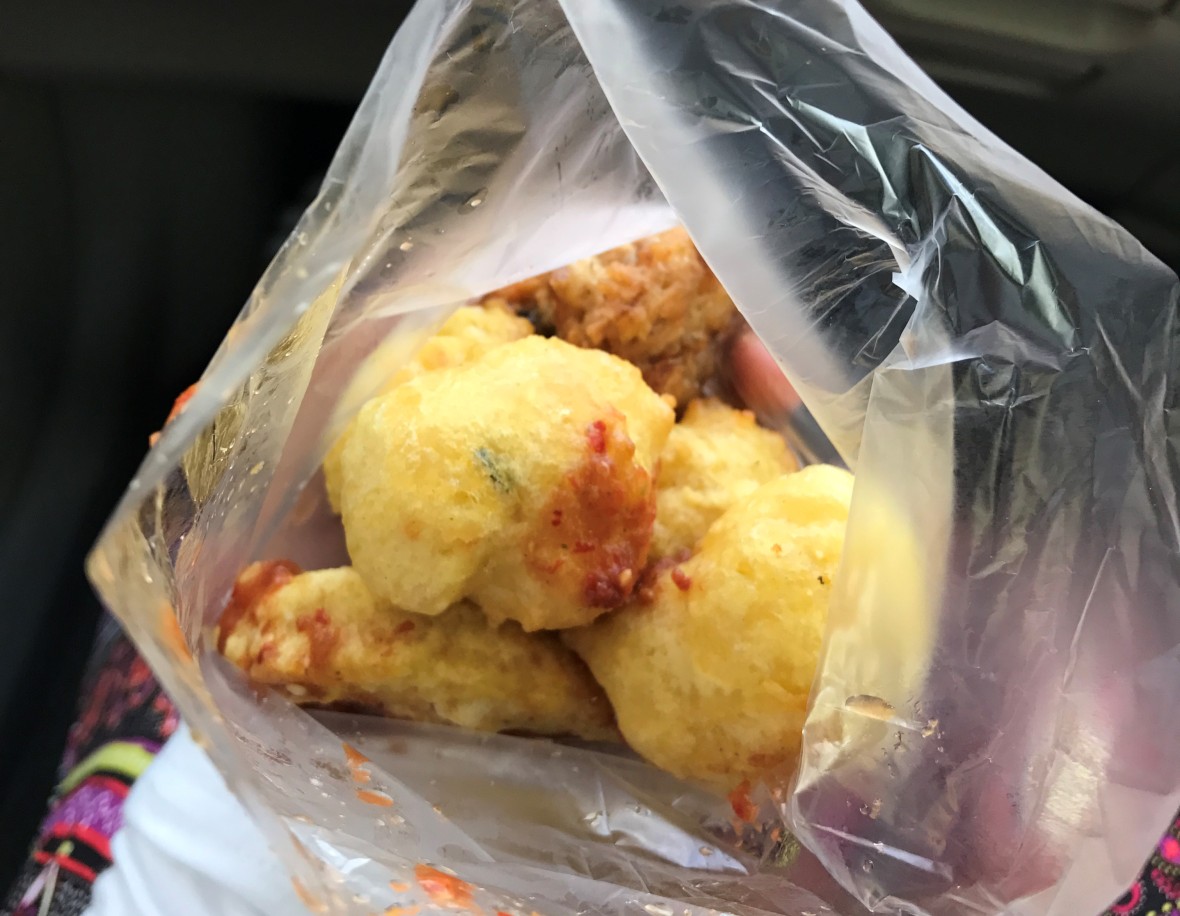 Roti chaud – fresh flatbread stuffed with a medly of different veggies and sauces, rolled up and eaten on the go.

Personally, I preferred this one, kindly provided by our Airbnb host as a departure snack – dhal puri, layers of flaky flatbread and lentils, laced with chilli sauce for a kick.

Alouda – an interesting play on the Falooda I’ve had in India, this version is served as a refreshing milky drink, topped with agar agar jelly noodles, basil seeds and fresh icecream.

Whilst we’re on drinks – let’s talk sugar cane. This is one of the biggest exports from Mauritius. You can’t go far without seeing fields of sugarcane towering over you. 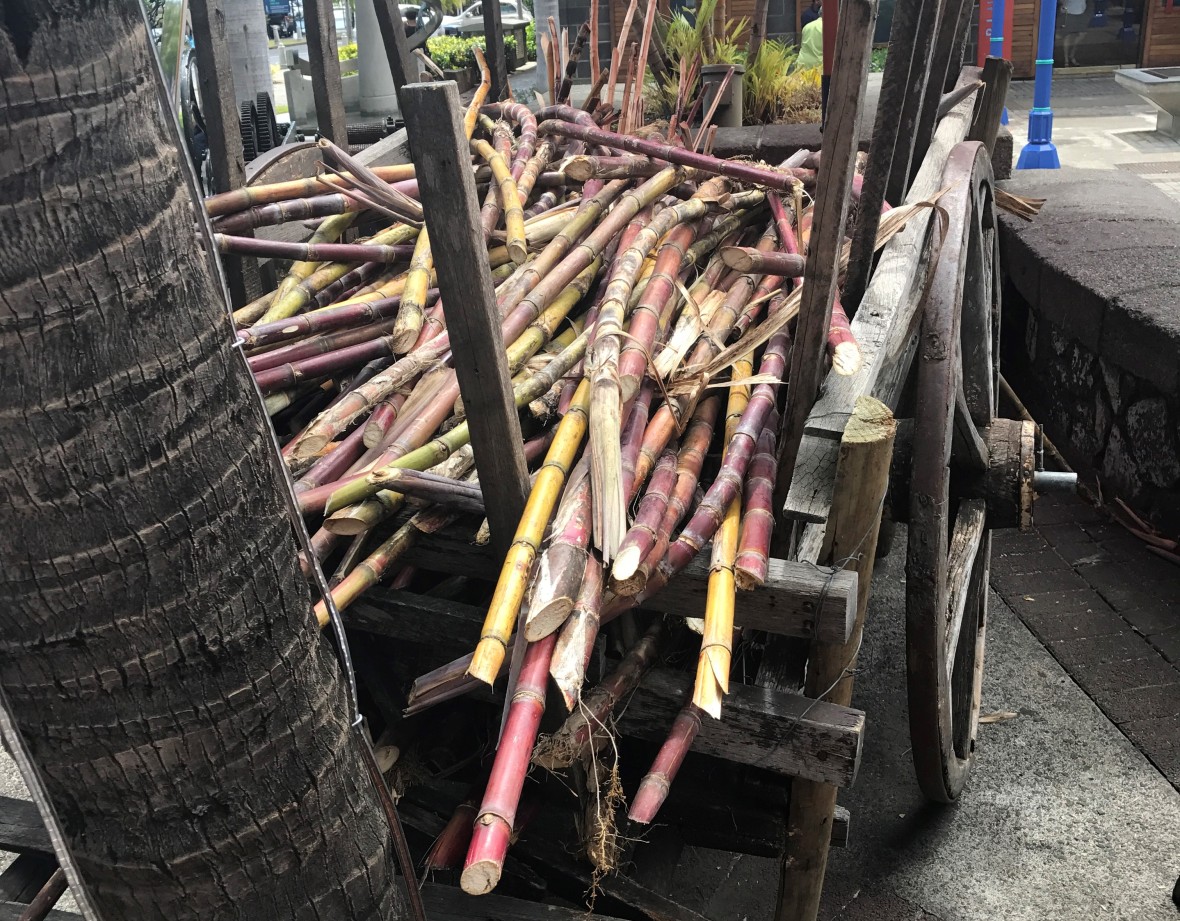 I absolutely love this stuff – brings back nostalgic memories from summer breaks spent in India as a child. Definitely had at least a glass a day!

Roadside fruit – pineapples, coconuts, mangoes etc are all available as snacks throughout the island. 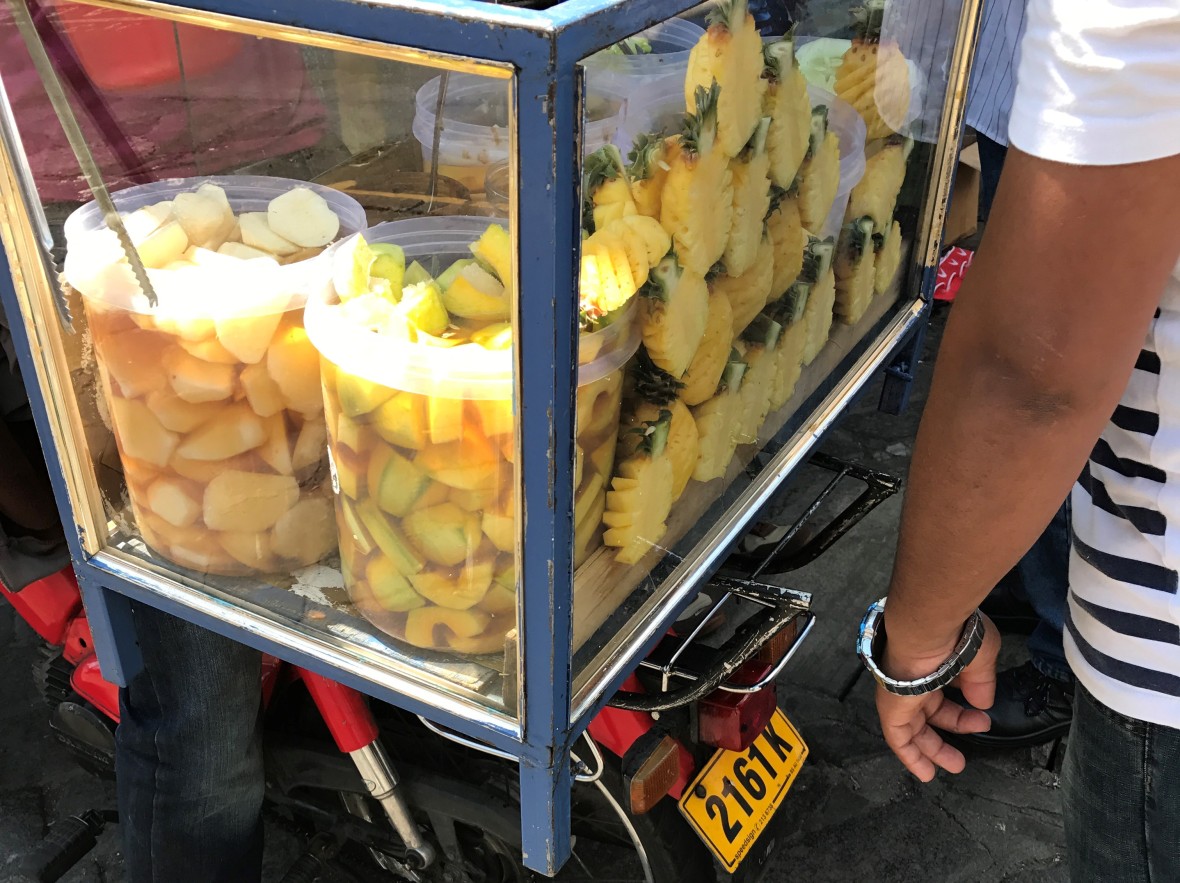 This wasn’t particularly amazing – but I like the pic. Chocolate and vanilla whippy ice cream with a chocolate biscuit. 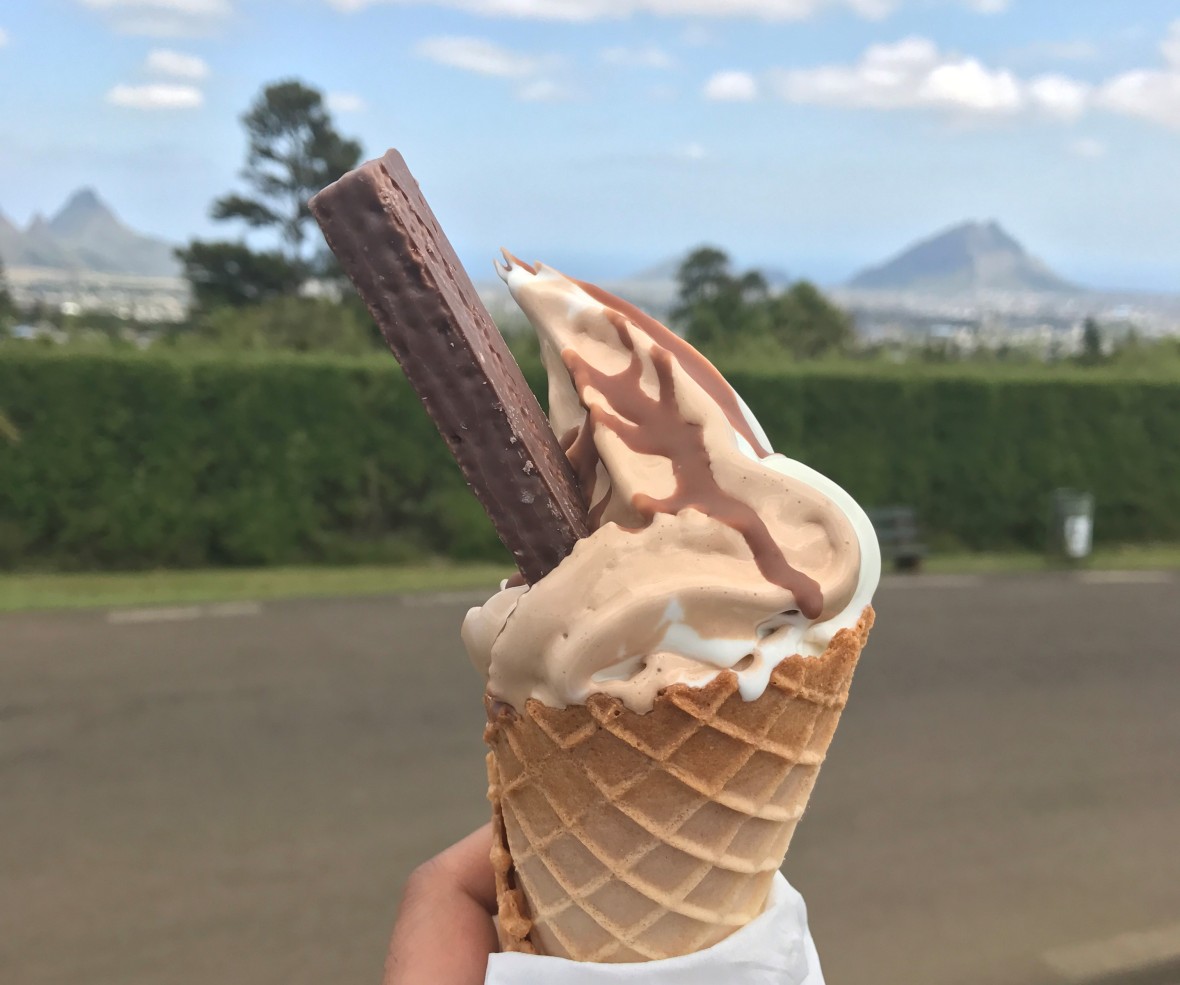 And, that, my friends, is what we got up to in Mauritius. Have a wonderful week ahead!