Hope you’re having an amazing weekend. I was really hoping for a quiet, restful one but it’s not been quite as relaxing as I would have liked. This last week’s been rough on me and I’m starting to feel really burnt out – very conscious of my body sending signs and telling me to slow down so I’m gonna make more of an active effort to make some me time in the week ahead.

Anyway, now that I’ve had a little moan and got that out of the way, let’s move on to more exciting things – the third and final part of my South African adventures. Enjoy!

Jo’burg was a pit stop before and after our safari experience. There’s not an awful lot to do as a tourist and so I’d planned our trip to spend minimal time there. I’d describe it as a concrete jungle, and of course, it’s reputation for being unsafe proceeds it. We were extra cautious after reading a few horror stories online, and thankfully everything was absolutely fine. Perhaps it’s like London in that if you’re in the wrong place at the wrong time, you could be at risk. In any case, I recommend taking Ubers everywhere and not flashing around your valuables. I left my camera at our hotel when exploring because I didn’t want to scream tourist, so the set of pics which follow aren’t incredible.

The tone is set from the very beginning, as you can see, our tickets were randomly assigned either “whites” or “non-whites” and we were split up on the way in – having to explore the first exhibits on our own before being reunited later. 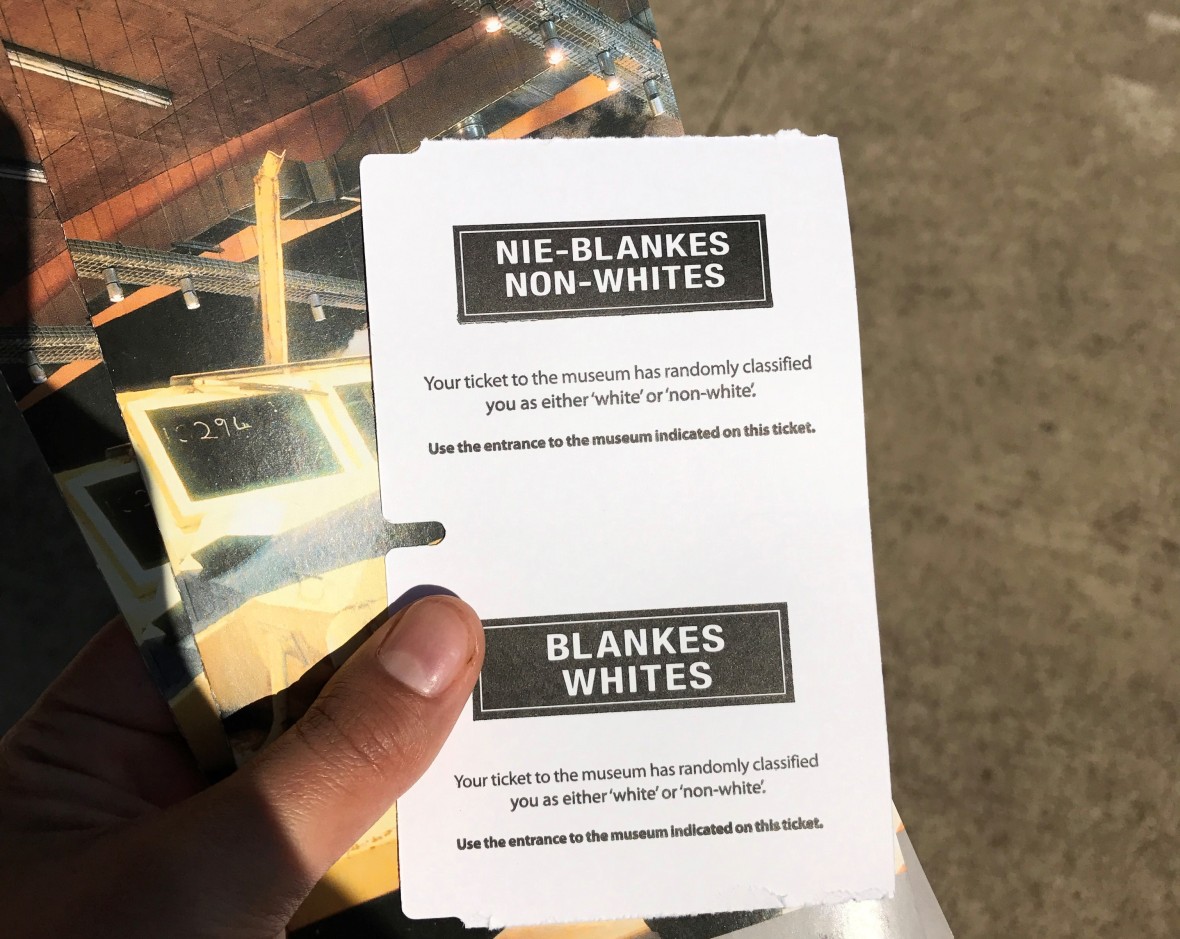 The whole experience was such an eye opener to what it must have been like in South Africa a mere few decades ago.

To be honest, I was really moved by some of the exhibits, emotional stuff. At some point fairly soon in, I forgot to take pics because I was so engrossed learning about it all. What scares me is that it was only very recently it was abolished.

I have no words, speaks for itself really:

^ this stuff makes my blood boil.

There was also a large exhibit dedicated to Nelson Mandela, as we’d missed Robben Island back in Cape Town, I was very keen to learn more about his struggles. 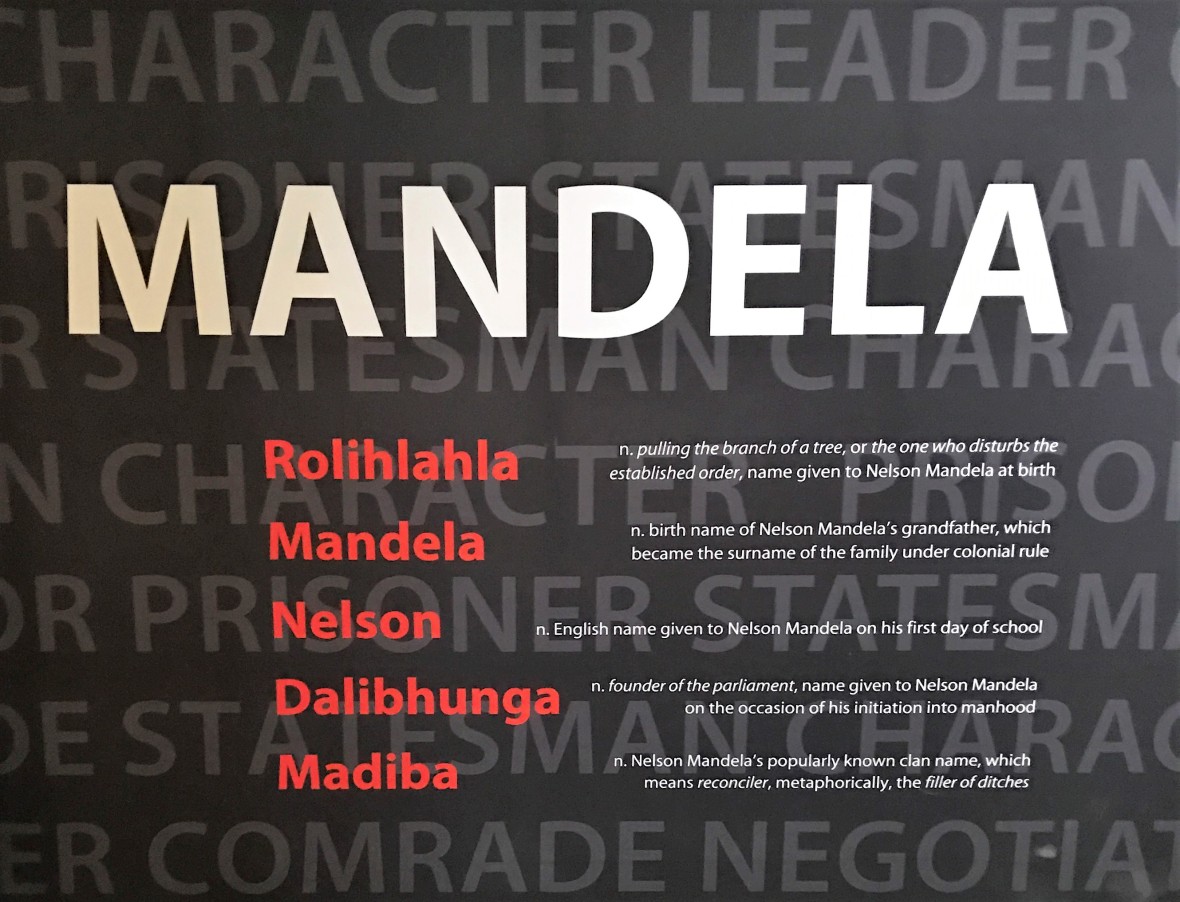 My only regret is not allowing enough time for the museum, I think we had 2-3 hours, but I could have very easily spent a lot longer in there had it not been closing up for the day.

As the museum closed fairly early, and with nothing else on the agenda, we decided to check out Sandton City – a large mall at the centre of town. Malls aren’t usually at the top of my hitlist when travelling for obvious reasons. Also, I won’t lie, I’m rubbish at shopping IRL and prefer to do it all online, but as it wasn’t crowded and the staff were really friendly and helpful, it was pretty enjoyable.

We stopped at Akhalwaya’s in the food court upon the recommendation of a friend for dinner and what a good shout it was. I opted for the special chicken sandwich and Mr Man went for the Polony special (came with possibly a tad too much ketchup!).

Just look at this beast. Chicken, onions and peppers, stir fried in a slightly spicy sauce with loads of cheese and a tonne of chips for some carb-on-carb action. There’s no way you can eat it gracefully but it was definitely delicious. 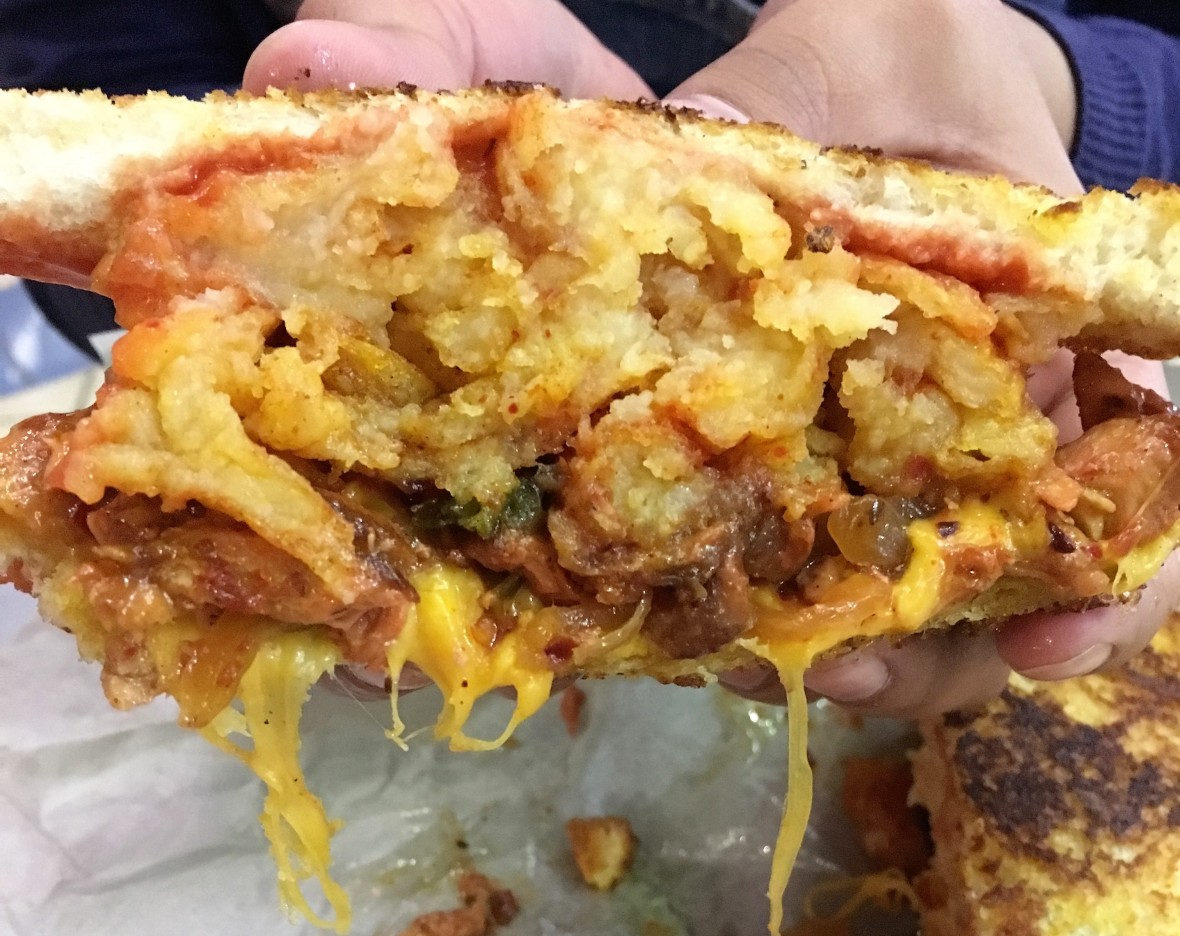 Another recommendation that we took was Calisto’s who specialise in Portuguese cuisine, which happens to be very popular in South Africa. It was a bit of a mixed bag – the food was delicious, the service was great, the drinks and desserts were both a let down.

We had booked a 4-day safari experience with Viva Safaris through Safari Blue Tours a few weeks before we left – mostly because they were able to accommodate our dates and were reasonably priced too. Our booking included both drives around the Balule Private Reserve and the Greater Kruger National Park which ended up being quite a nice mixture of on and off-road experiences. A couple of recommendations:

Many people I’ve spoken to since returning have asked what the accommodation was like – you basically get what you pay for – you can stay in anything from a tent right through to a luxury hotel with a jacuzzi / pool etc. This is what our lodge looked like, private little huts with en suite included as standard:

It was by no means luxurious – but it was fit for purpose.

One of the highlights of Tremisana Lodge is the resident Vervet Monkeys – they’re so cheeky, running amok and always stealing food at meal times!

On our first night, we had a quick sundown game drive before a candlelit traditional Braai dinner – it was really magical. I wish I’d taken a couple of decent pics but I’d left my camera back at the lodge.

When you’re on safari, there’s a lot of time spent just sitting, looking for animals, sometimes 30mins at a time before a sighting…

But the landscape is beautiful so it’s not all boring!

Sunset at the river bank –

Couldn’t decide which one to share so here’s the second, more pinky one: Another sunset drive, the various tree silhouettes are so stunning:

Now… on to the animals.

Impalas (one of the many types of antelope in South Africa):

So many of these little guys around, we’d stumble into them quite regularly: 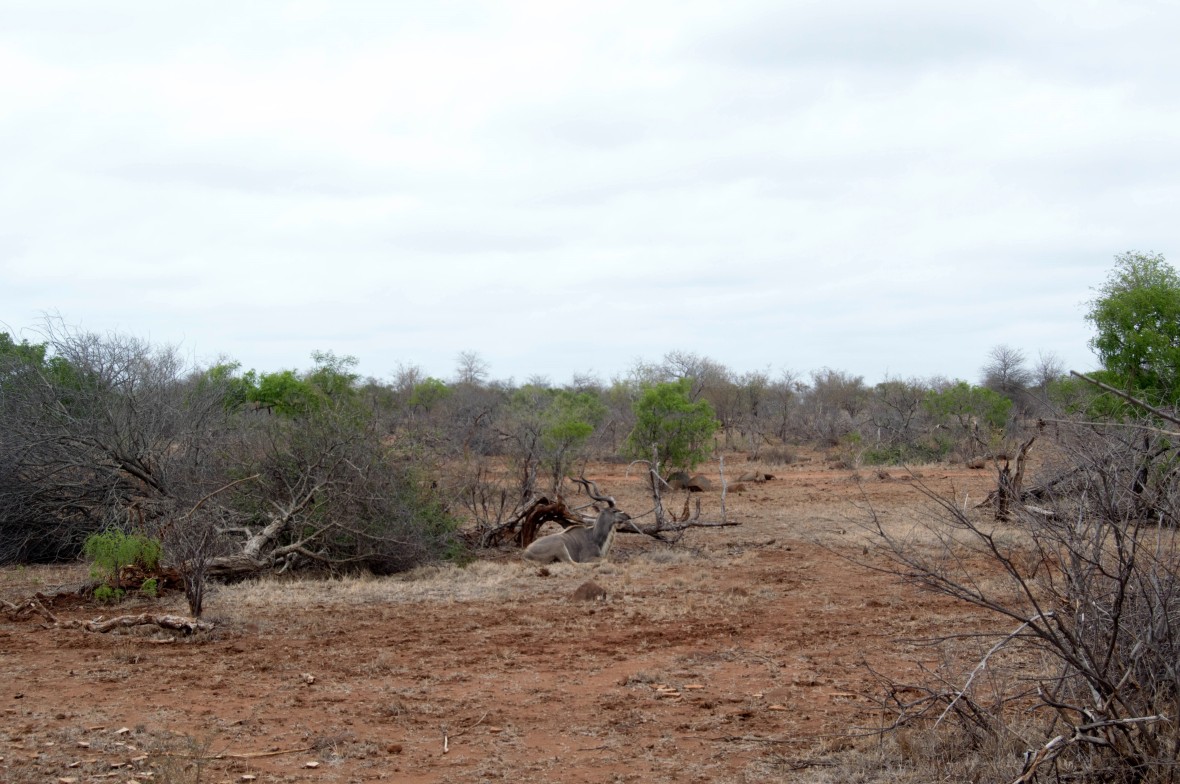 Troop of baboons – they were everywhere!

Something quite cold and menacing about their eyes: 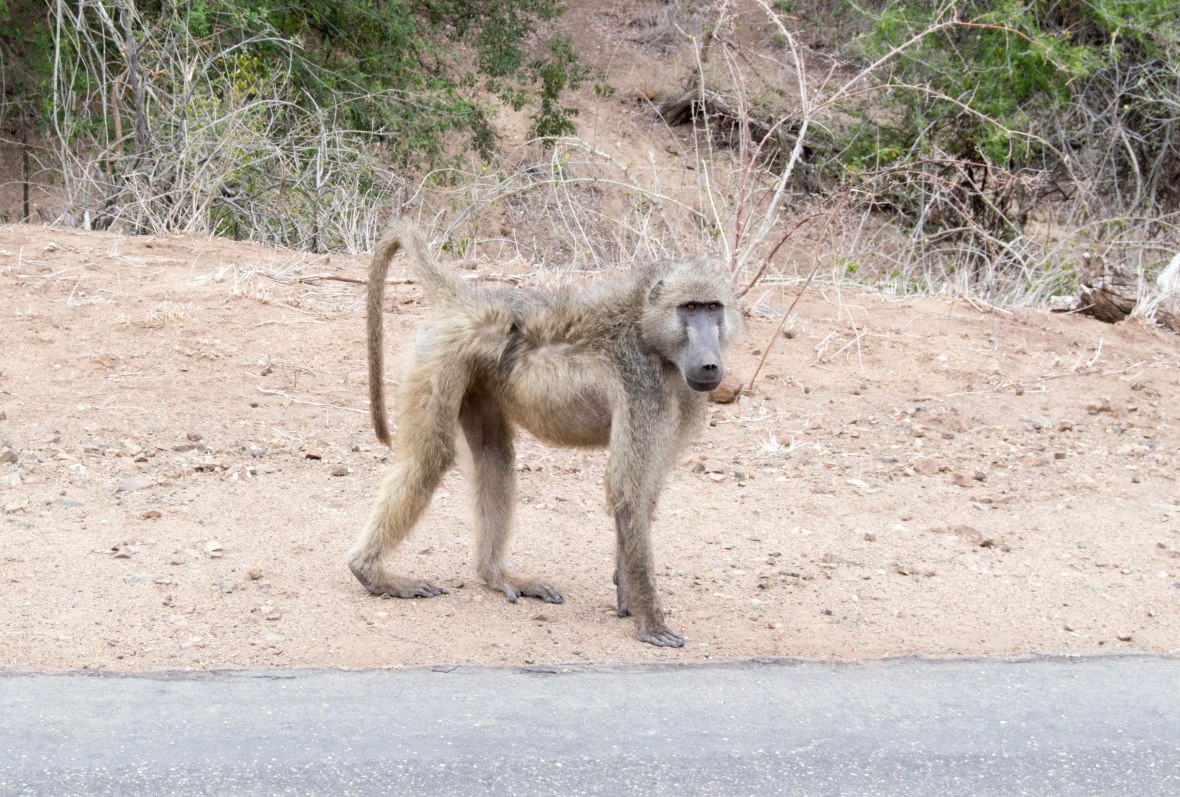 Can you see the croc in this pic…?

^ Hint – right in the middle! You see why a better lens would have been useful.

Here’s another by the river bank.

We saw a couple of hippos, but unfortunately, usually only through binoculars. In the heat of the day, they tend to spend all their time in the water so even then, you’d see their eyes and that’d be about it.

^ This is the one occasion we saw one braving the land.

Rhinos are a bit of a rare sighting – they don’t have any real predators out in the wild, except for humans, hunting them down for their horns. =(

Here’s another from afar: 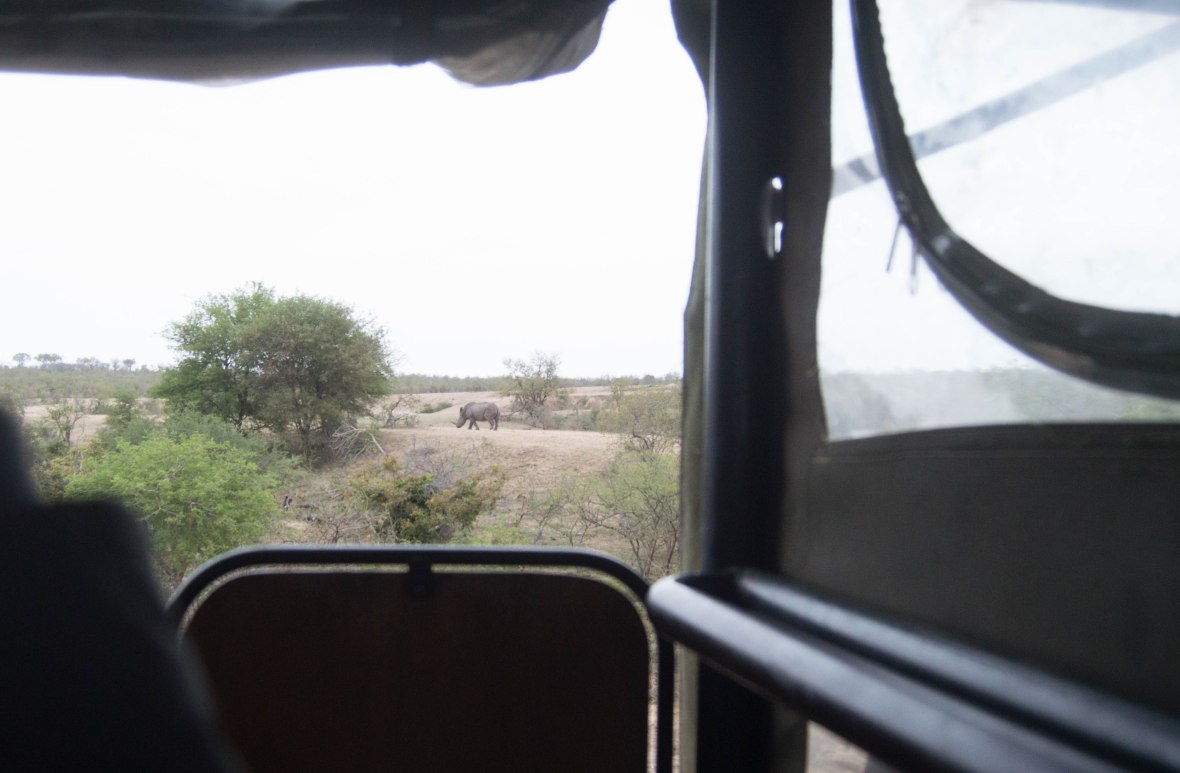 It was really funny when we bumped into this little guy on the left, the guide pointed him out, “here’s Pumba,” using the name from the lion king rather than the proper classification, warthog. 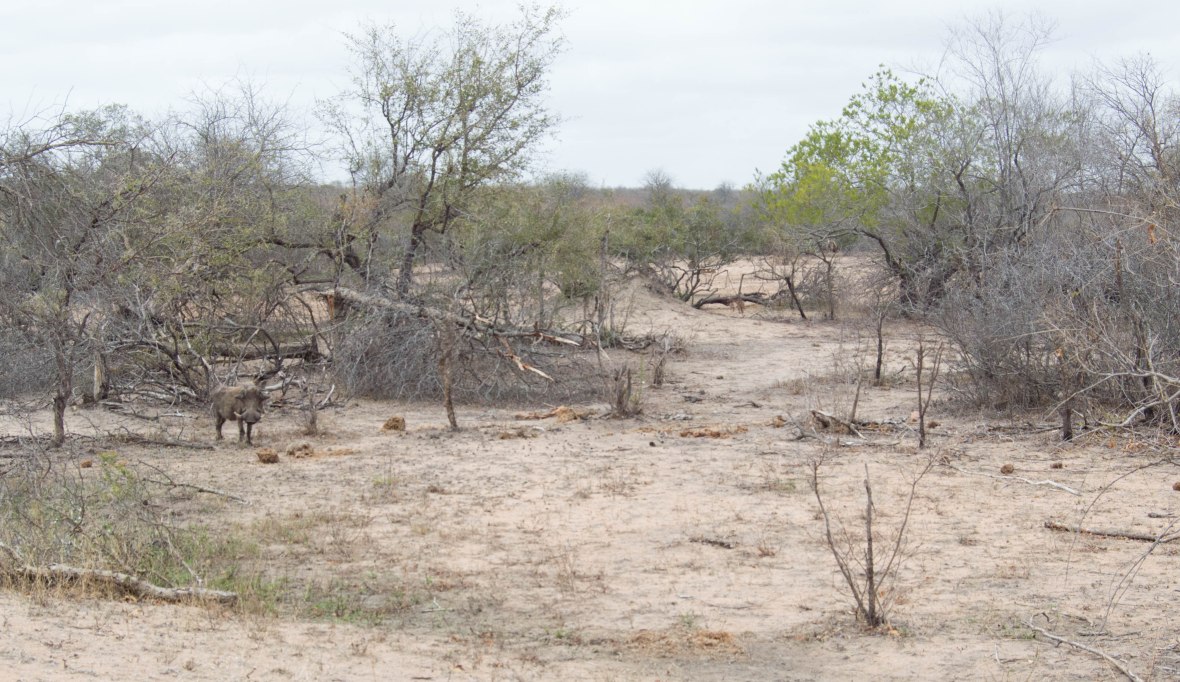 Can you see the one below, if you follow the path, it’s in the distance – just hiding in the trees on the left. 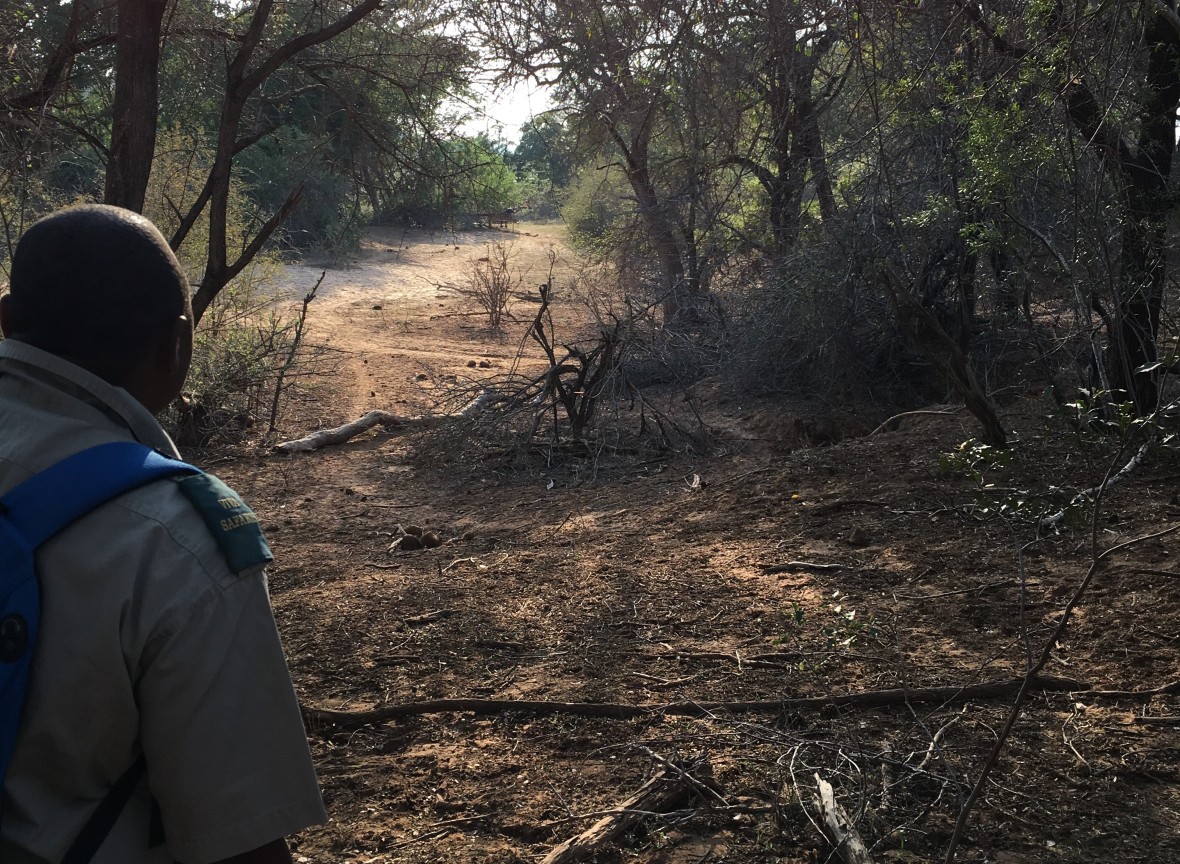 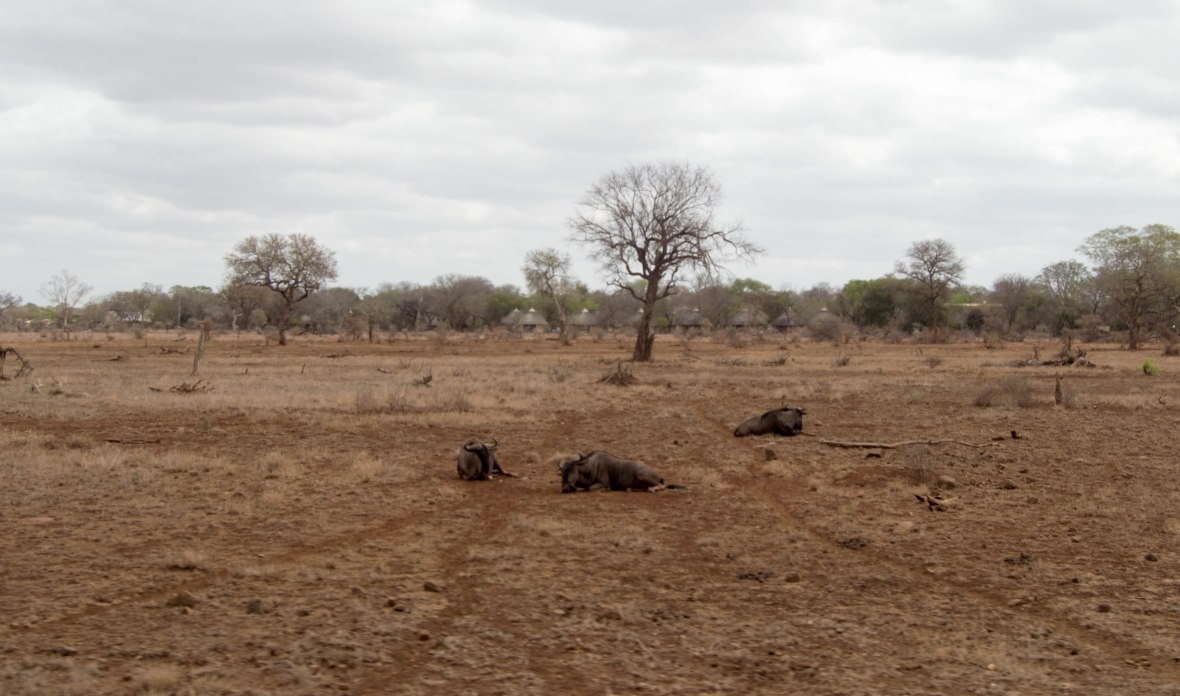 We’d often see animal skeletons, a reminder of the reality of the bush: 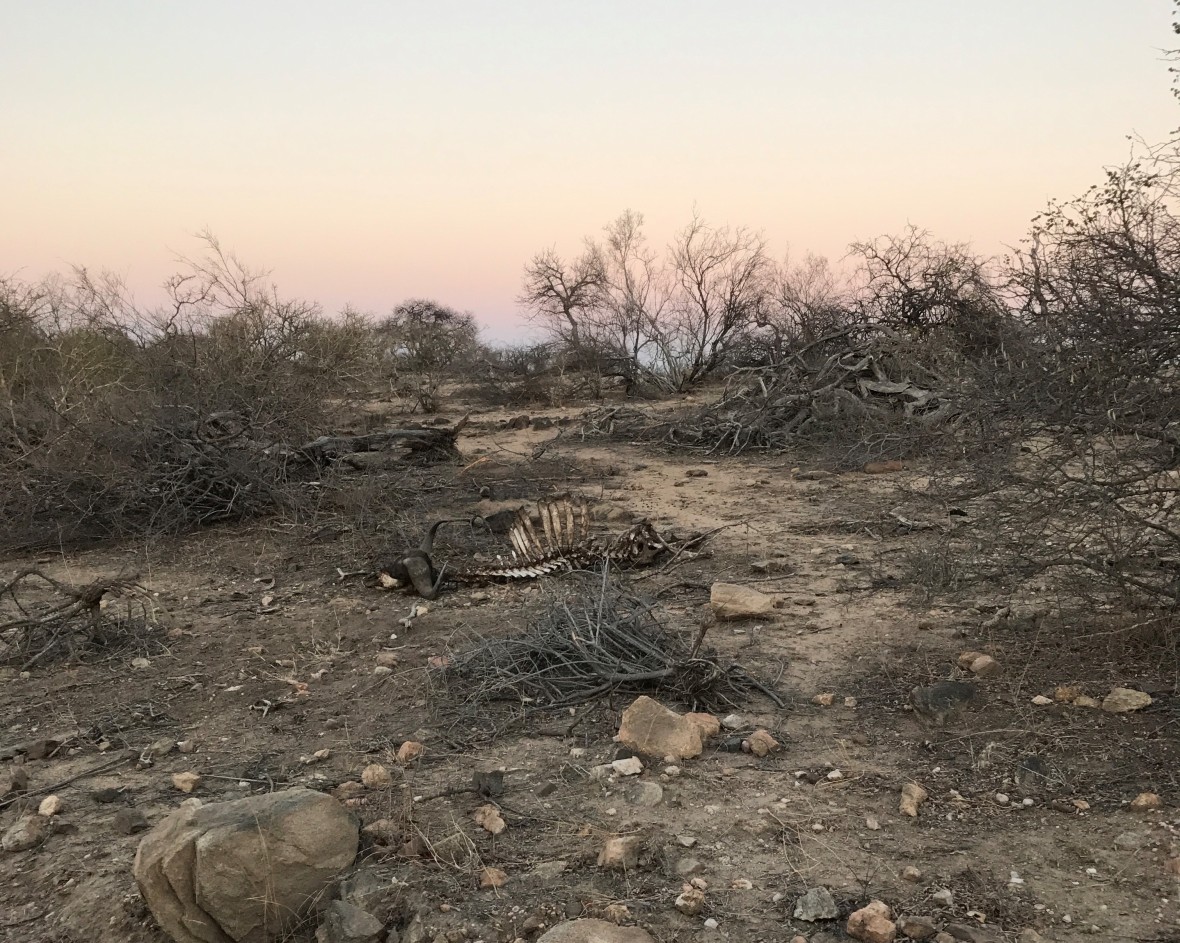 Check out Mr Zebra and his stripes – so cute! Sadly we only saw one zebra the entire time.

But, we were lucky enough to see a pride of lionesses cross the road: 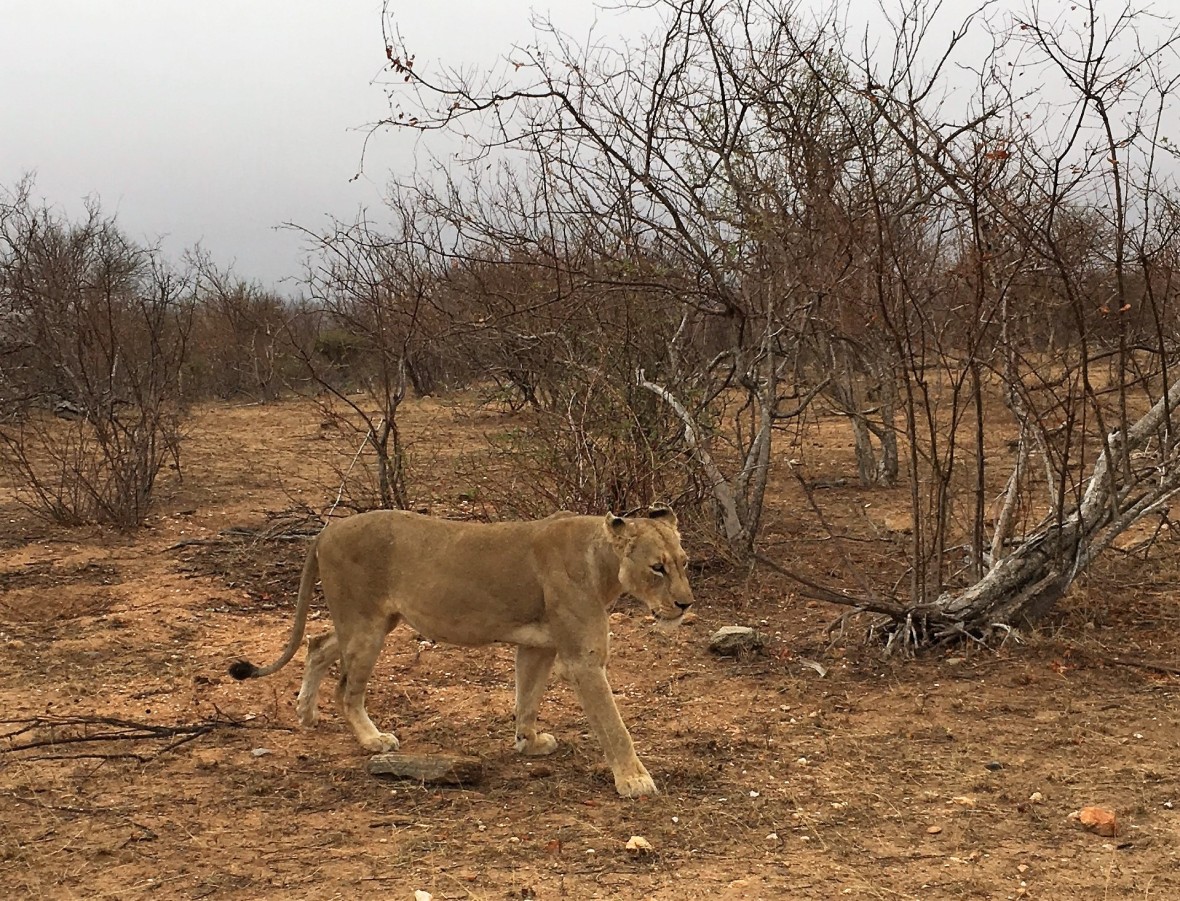 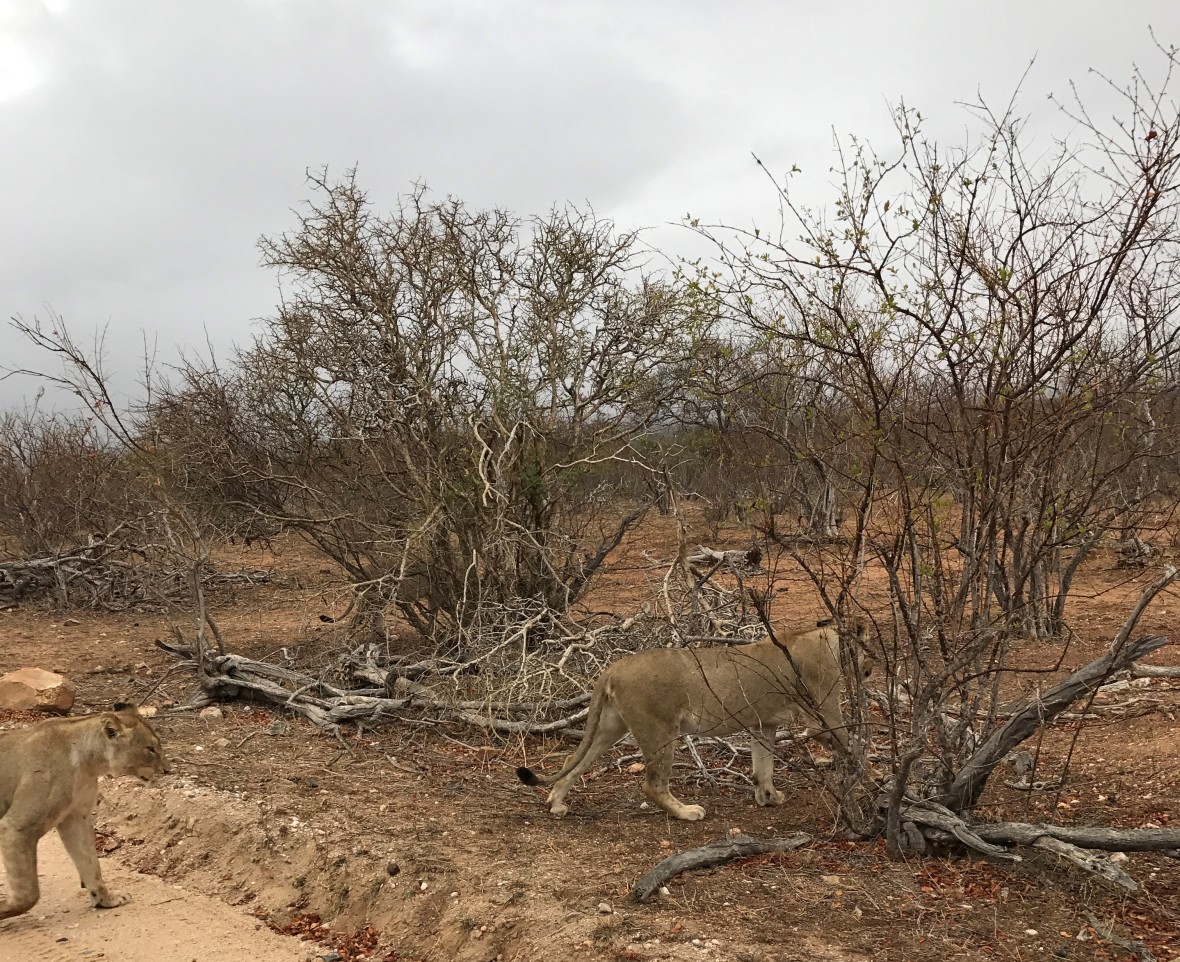 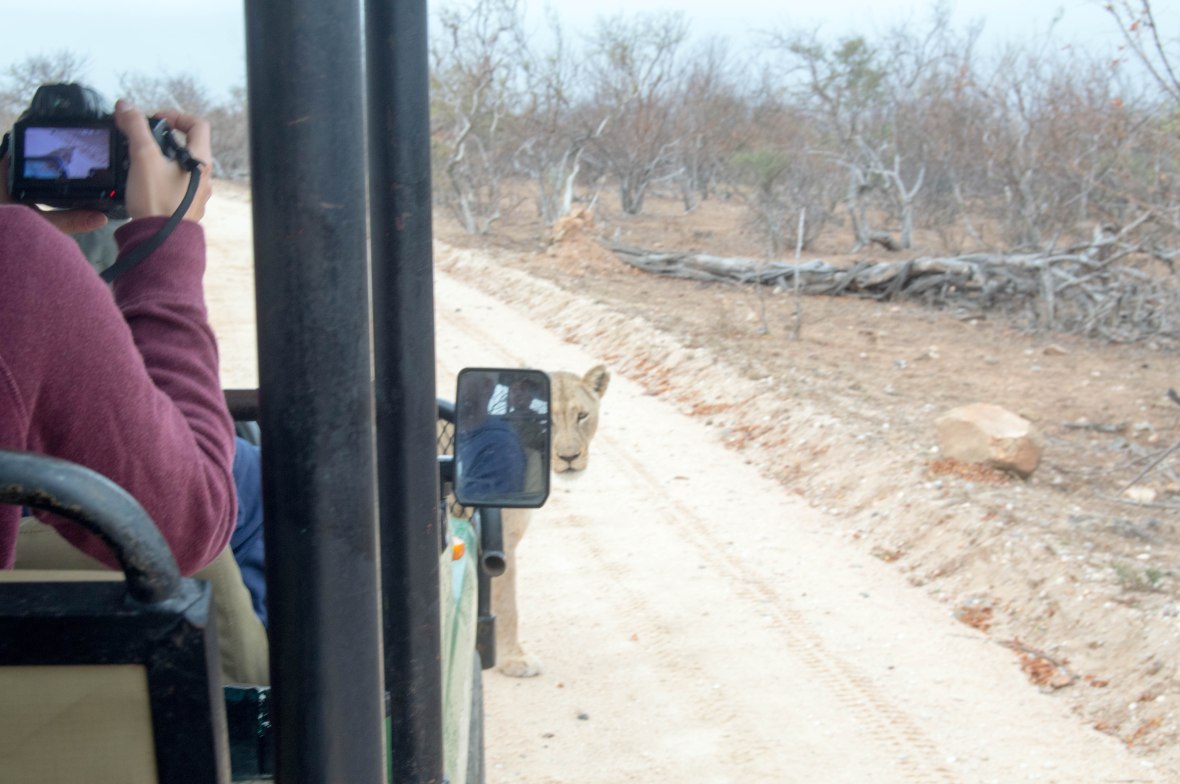 Couple of males below – hearing the guy at the front roar was truly special.

We saw loads of giraffes – here’s our guide telling us the difference between the male and the females: 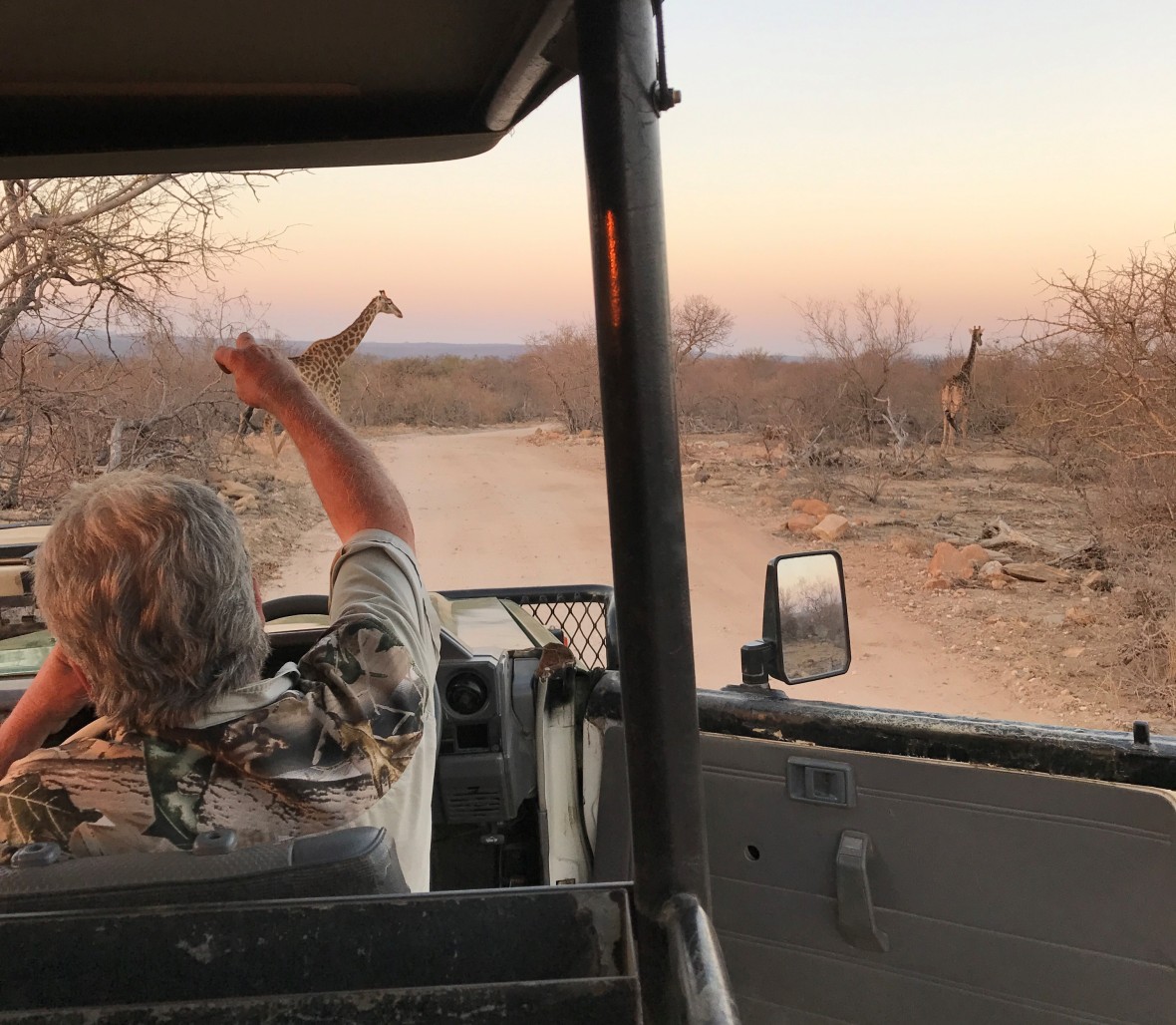 They’ve got such friendly eyes: 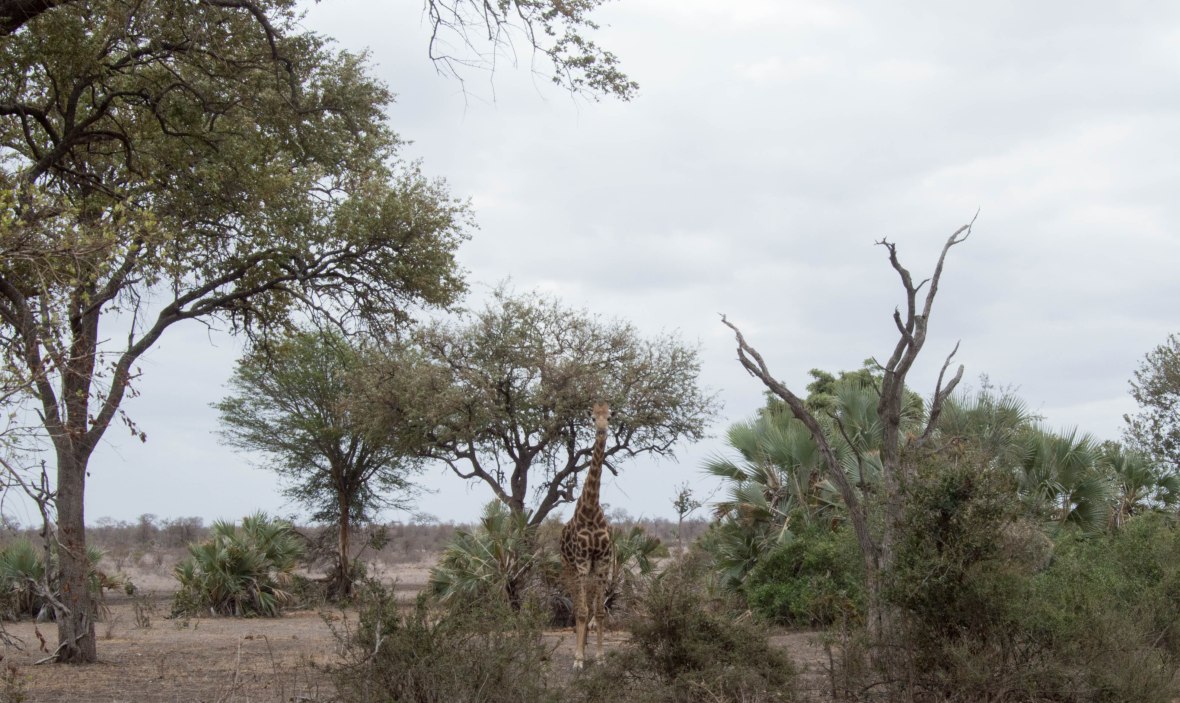 Pair of them here:

We were lucky enough to see elephants on multiple occasions – here’s three males hanging out together. They basically just eat all day, definitely living the good life! 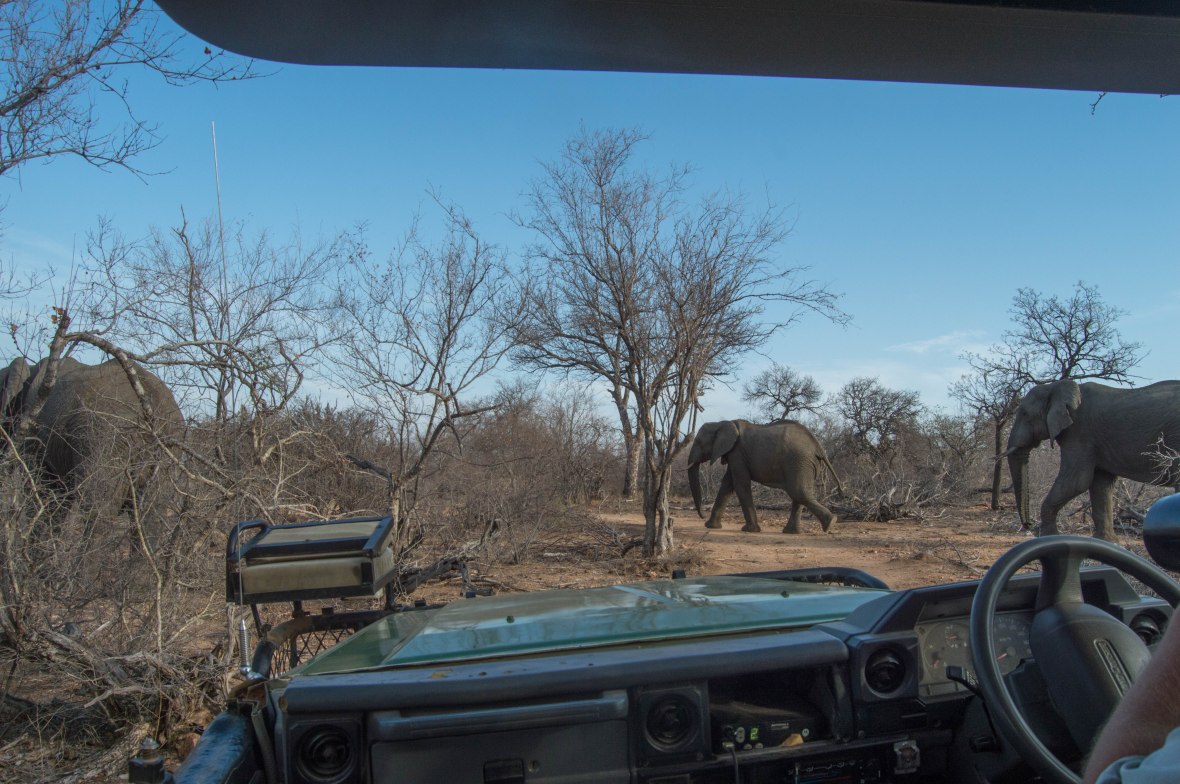 Saw this guy crossing the road:

This picture gives you some appreciation for their size, huuuge!

So I had to think long and hard about the next bit and whether or not I should share because it was pretty shocking and I wouldn’t want people to be put off of visiting – however, I decided I should, because ultimately, when you’re in the wild, you’re never 100% completely safe.

Part of our safari experience included a bush walk. We were given a brief intro before leaving our vehicle and setting off on foot. We were told to keep very quiet and walk in single file, in an attempt not to scare off any potential animals. In theory, the whole thing is a very non-contact walk – our guide told us about various trees and shrubs, a lot about animal poo with plenty of examples.

We also saw some animal footprints in the dirt – big cat ones here:

We set off following the path of the river bank where we’d seen some fresh elephant prints and were hoping to be able to see them from a distance. I was quite keen so myself and Mr Man were directly behind the guide, right at the front of the group. 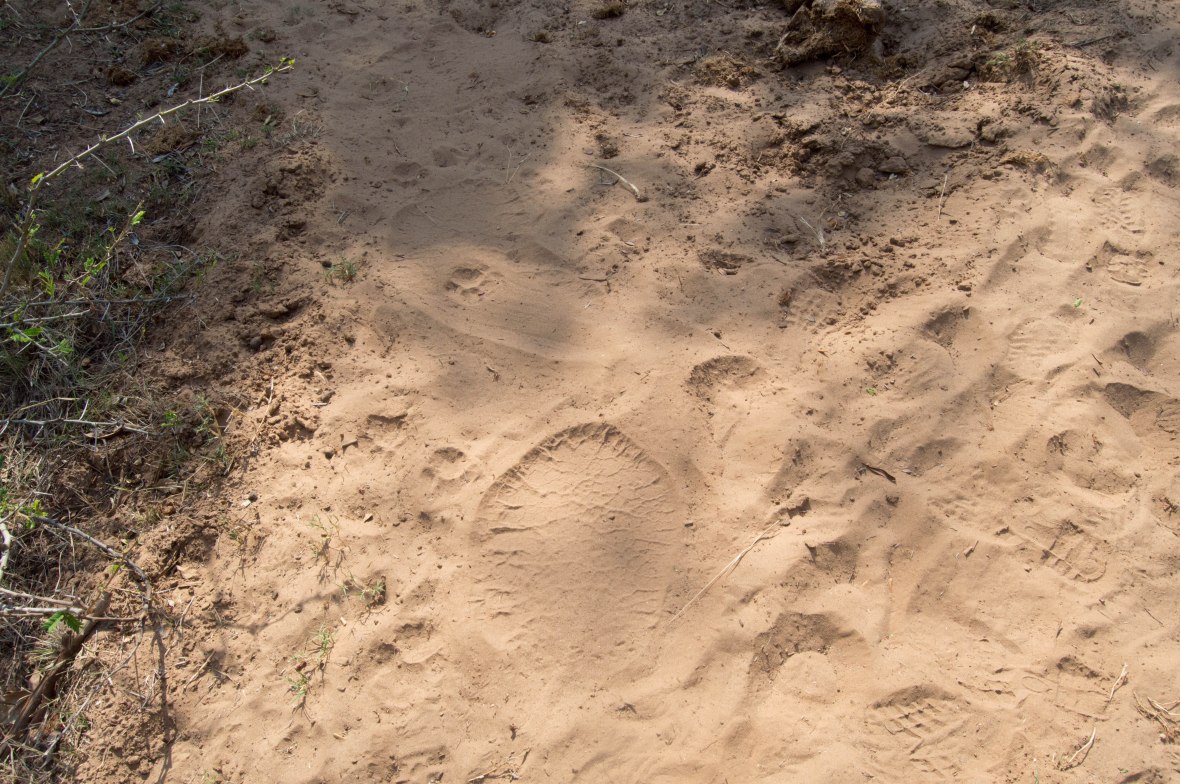 Onwards we walked, until suddenly behind me I heard shouting and shuffling, I turned and to my horror saw that there was a water buffalo (those things are freaking HUGE!) making it’s way out of the river, it must have been hidden in the reeds when we’d walked past seconds earlier, ready to charge the end of the group. I won’t lie, I froze. It all happened so quickly.

One of the women at the end of the group got left behind and hid behind what I can only refer to as a something of a sapling. The water buffalo, quite obviously furious at our group for invading its territory was charging towards her. It was about a meter away from her when I heard a huge BANG, and realised our guide had shot the animal in the neck. The impact knocked it over, but within seconds it had scrambled back to its feet before running off into the bush. Thankfully it didn’t come back for more, apparently they’re really quite aggressive and don’t really like to go down without a fight. The whole group was in shock and the poor woman was really shaken up. Before we knew it, someone had driven our vehicle to us and we were headed back to camp.

Now this kind of thing doesn’t happen often. In fact, they said it had been the first ‘incident’ in 10 – 15 years, however, it does serve as a reality check. Animals are unpredictable and often aggressive. Even trained guides can miss them. I’m not sure I’d be too keen on another bush walk anytime soon.

On the day four, we set off back to Johannesburg, making a pit stop at the Blyde River Canyon.

It’s the third largest canyon in the world and the views are so impressive. Unfortunately, however, the weather was against us… Still here’s the best of the bad batch of pics I took: 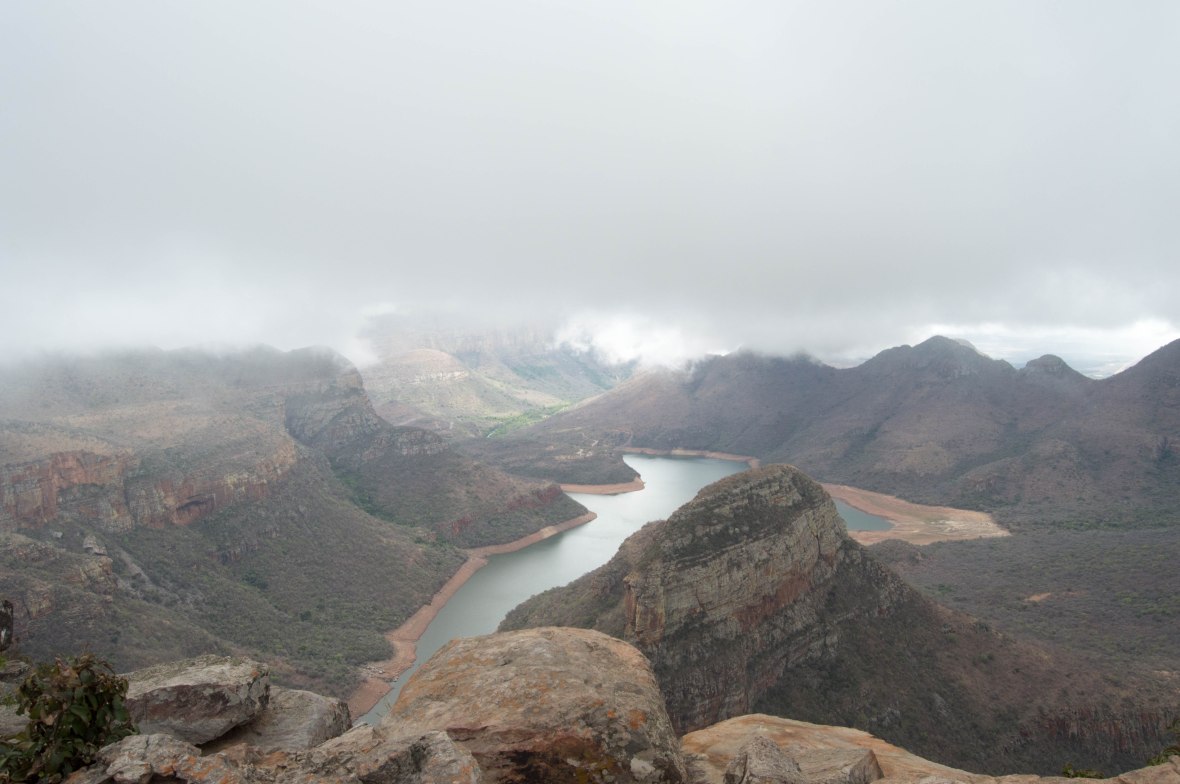 There’s a little market here too where you can buy souvenirs and gifts – be mindful to haggle – the women can be a little pushy so hold your ground!

A little treat from the petrol station shop we stopped at:

Oh – one final thing to share, breakfast at Mugg and Bean at the airport was delicious – what I can only describe as a creamy veggie shakshuka with toast and dreamy iced coffees. 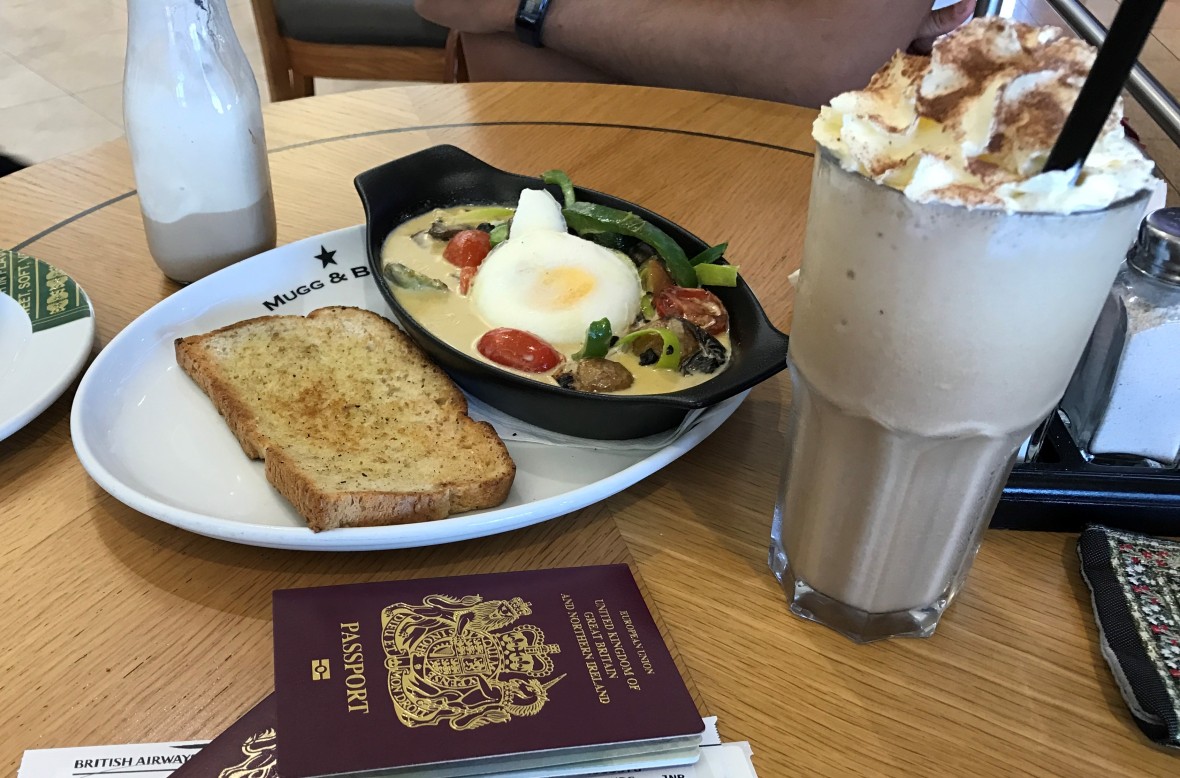 And that’s a wrap. Thanks South Africa, for being absolutely breath-taking and giving me a truck load of special memories to cherish. Next stop on our trip – a week in Mauritius!