Here’s installment four of my travel diary! We woke up nice and late on our fourth morning and hopped in a cab to Deira where we spent lunch roaming around the gold market (souk Dahab) and the neighbouring streets. Here you can find anything from clothes to perfume to technology. The best way I can describe Souk Dahab is like London’s Green Street on crack. Rather than seeing gold shops dotted up and down the road here, you see entire streets of them there. And it’s not just the usual jewellery, oh no… Full on, everything from necklaces that would ruin your posture to golden dollars!

If you’re planning to buy anything, check the gold rate (keep an eye on the different carats) and ensure that is how much you pay per gram accordingly. Additionally, be warned, they will add a silly amount for production, yes, it’s normal to pay a bit on top for the gold labour – designs are often very intricate, but this is also the way people are ripped off. Haggle this value! A lot!

Every so often, whilst strolling around you’re sure to be approached by someone trying to lure you in to purchase things like fake designer bags and watches (the names of which they can’t even pronounce!) Just politely say no and they usually leave you to it. Deira reminds me of India a lot, probably assisted by the fact that there are so many Indians here and the amount of haggling you’re expected to do in the shops! But here, and all along the creek you will find the more ‘real’ Dubai, not just the shiny malls, designer gear and elaborate grandeur…

I’m pretty sure we also grabbed a smoothie each at some point on our excursion, but I don’t have a picture to share. Sorry! Coming up to 2pm, we headed back to our hotel to drop off our stuff and freshen up for the evening’s activities…. Desert safari! We had vouchers for this in our Entertainer (

We had vouchers for this in our Entertainer (mentioned in the day 1 post) which meant we got BOGOF tickets. If you’re planning on doing this, it’s worth calling around to find a good price, our hotel were offering a desert safari trip for more than double what as we paid per person. I guess they all add their own markup… At 3pm sharp our driver arrived and we hopped into the back of his 4×4 and began our journey.

It must have taken between 40mins and an hour, with one pit stop, where he needed to deflate the pressure in his tyres (in preparation for the sand.) Here we were able to quickly peruse the touristy shops and picked up some water. Before we knew it, we’d arrived in the desert. Our driver instructed us to pop on our seatbelts for some dune bashing. The best way I can describe this is a sandy assault course… I won’t lie, it was a little scary and there were screams!

Basically, the driver proceeded to speed up as we drove over the slippery mountains of sand, with seemingly random aggressive turns leading to the sand flying everywhere. There were a few actual cliffhanger moments when he pushed down hard on his breaks and it felt like his 4×4 would topple over a huge drop.

After about ten minutes on this tumultuous journey, we reached the ‘campsite.’ There was plenty to do and see. Outside there was the option of hopping on a camel for a quick ride, or grabbing a board and sandboarding down the sand slopes. Both were free. There were also some dirt bikes and dune buggies up for hire, the tracks are pretty small and the prices pretty large, so we didn’t bother. We decided to explore the nearby desert and watch the sunset. Here’s a couple of pictures:

And then this magical one: 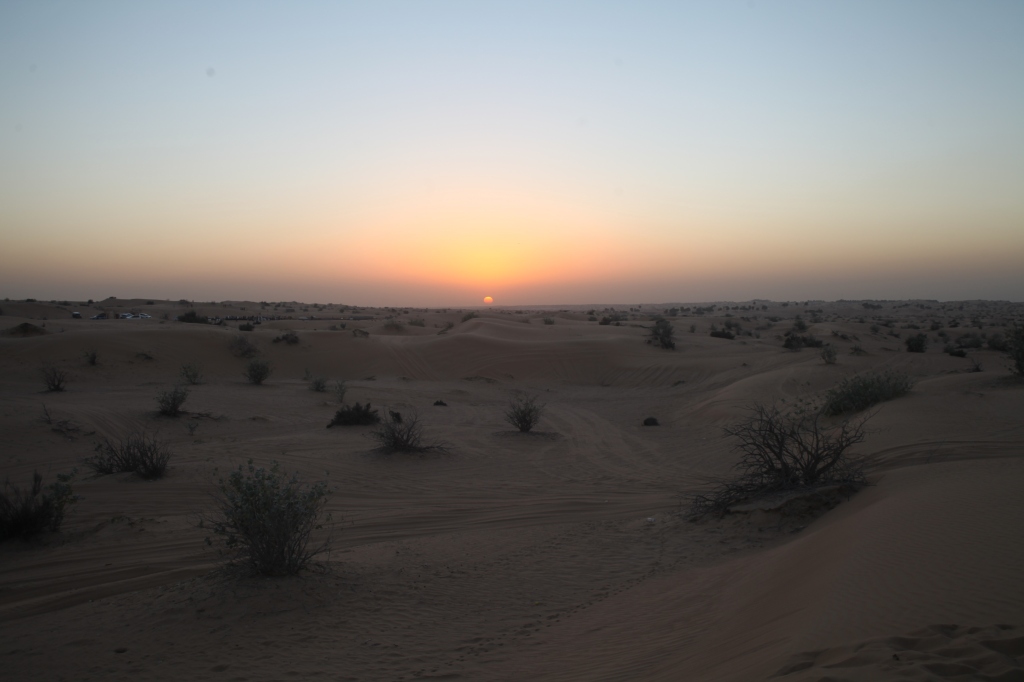 Absolutely stunning. After that, we headed into the ‘campsite’ which is designed in a large circle with a stage in the middle. Around this, you have some traditional floor seating and various things happening on the outskirts – little shops selling everything from rugs to souvenirs, as well as free things including mendhi/henna tattoos, shisha as well as food. After sunset, it wasn’t long before the start of the show, and so, we opted out and got comfy. 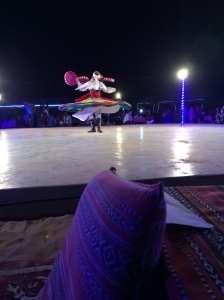 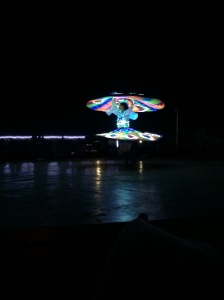 We took a seat near the stage and waited for the performance. There were a few different things to keep us entertained: a guy spinning (I almost got dizzy watching him!), a puppet show (pretty amusing and the crowd got involved) and also finally a belly dancer popped up on stage.

Midway through, there was a break and dinner was served. Food was also free as part of the package. It’s all a big buffet, so you can help yourself to everything from staple carbs, hummus, salad, curries and also grilled meat (although that bit is limited to a chicken and lamb skewer each.)

For dessert, they were serving up a small sample platter of sweets each including baklava and Indian mithai. It’s not amazing stuff, but it’s not bad either. No pictures I’m afraid, completely forgot as I didn’t eat much and the lighting was bad.

At around 9pm the shows came to an end and we pottered on out to meet our driver to take us back to our hotel. Managed to snap up decent picture of the Burj Khalifa glimmering away on the ride:

Back at the hotel, we decided, as the night was still young, to go out for a stroll. We ended up at the BurJuman Mall and got ourselves some fro-yos, from a place called Yoghurberry. Delish! I’m seriously missing one of our usual haunts, Pinkberry in Stratford (anyone know why they seemed to have closed!?) 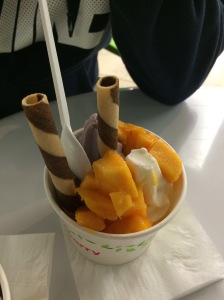 Anyway, I went for chocolate mixed and plain base topped with granola – should really have looked a bit closer as those were raisins, not chocolate chips laced through the oats. =(In the meantime, Mr Man enjoyed blueberry and plain with mango chunks. Interesting turn of events, as I’m normally opting for the fruity concoctions! Sweet teeth satisfied, we walked back to the hotel and crashed.

And that was the end of day four.

I’ll try have day five up towards the end of the week! =)