Hope you had a spectacular weekend?

I seriously don’t know where mine went. I mean, of course, I do. But I’m in denial because I didn’t get everything I wanted to ticked off, which means it feels like I’ve wasted my weekend. I hate that feeling. And I get it so often, because, I’m always overly ambitious about what I think I can get done in two small days. I think I’m just too ambitious with timings in general – I always think I can get to work or to x meeting point on time, but I’m usually the sucky employee / friend that’s at least 15 mins late. I also regularly think I can get through another episode of whatever we’re bingeing on, on Netflix most nights and in reality about 4 minutes in, I’m fast asleep.

This makes me seem like I’m really unorganised, but I plan a lot – I write to do lists for multiple different areas in my life, I create menus for the week, I use Google calendars and send everyone invites to anything we’ve scheduled. But just try and squeeze too much into most of my days, and uh, don’t usually manage it.

Is it wrong that I’m also ambitious about being better at my time keeping? Each weekend, I think, “yeah, that doesn’t seem like too much…”

Mr Man is a lot smarter about his time keeping. He keeps me in check, “Kay – we need to leave in 2.389095 minutes if we’re gonna get there on time!!” And uh, usually, around 6 minutes later after I’ve rushedly brought to an end whatever I’m occupied with, dragged a comb through my hair, put on a clean tee and grabbed my bag, we are able to depart. And after all that, we’re only a couple of minutes late.

Let’s talk about this week’s recipe – another ode to summer. But the September days to date have been treating us well – warm, sunny, and largely dry.

So this week, I grabbed a couple of packets of berries, a tub of yoghurt and a bag of granola to create these bad boys. 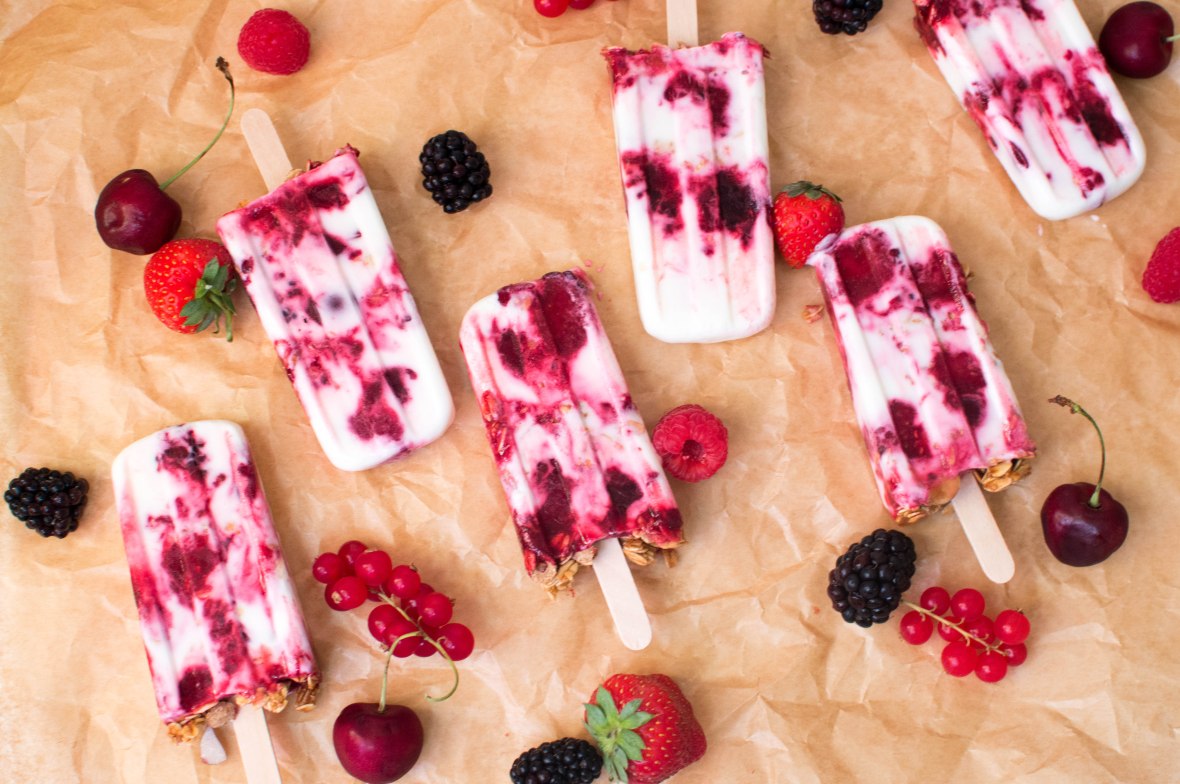 I can’t even begin to describe… 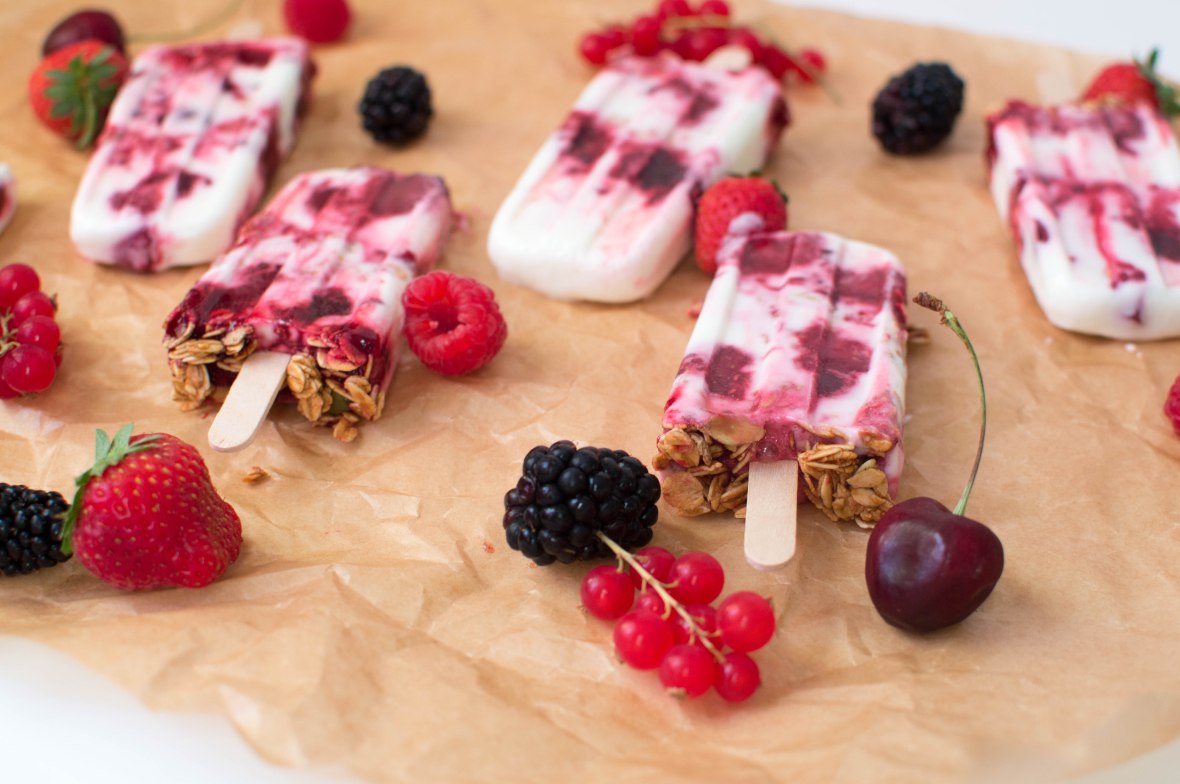 In fact, I won’t lie, I’ve made two batches of the stuff already, because I personally inhaled the first batch (Mr Man may have had just one…). And the second batch which I made this weekend is already half gone!

And you know what, it’s not all bad, because minus a bit of sugar – they’re actually quite healthy – I used plain organic yoghurt, fresh berries, honey and granola which is basically toasted oats – making it TOTALLY healthy, right?! 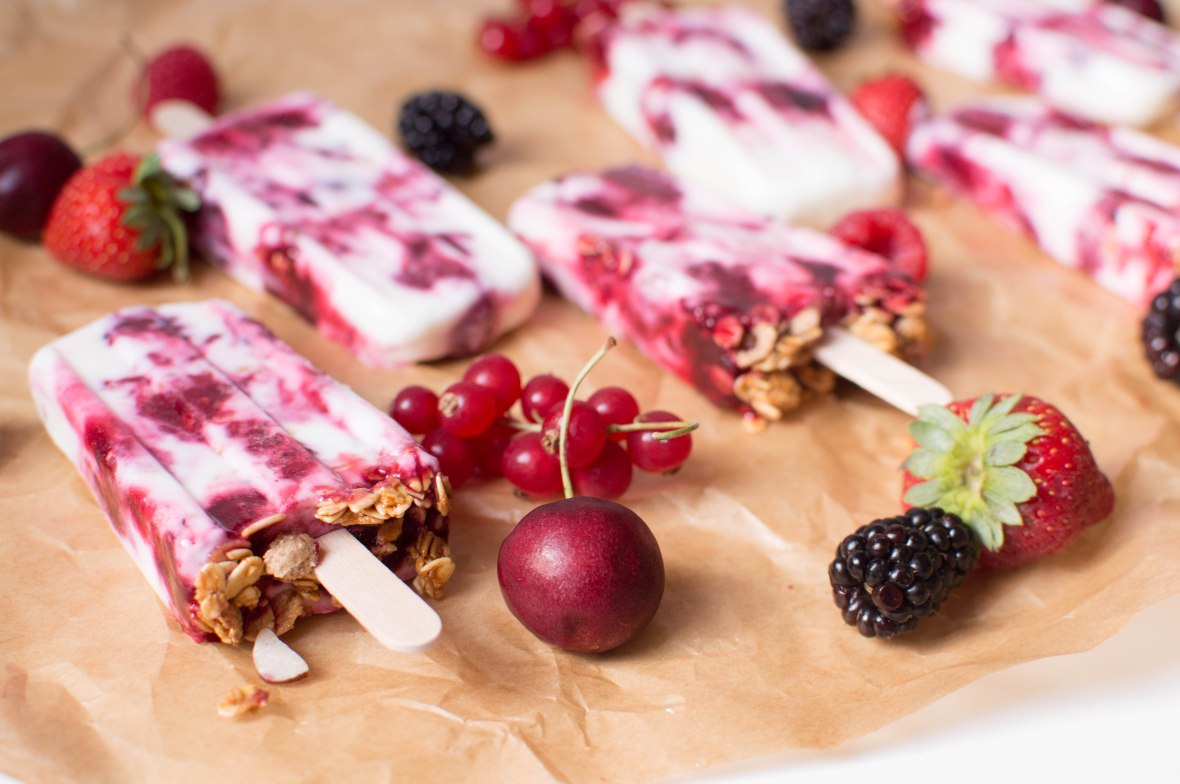 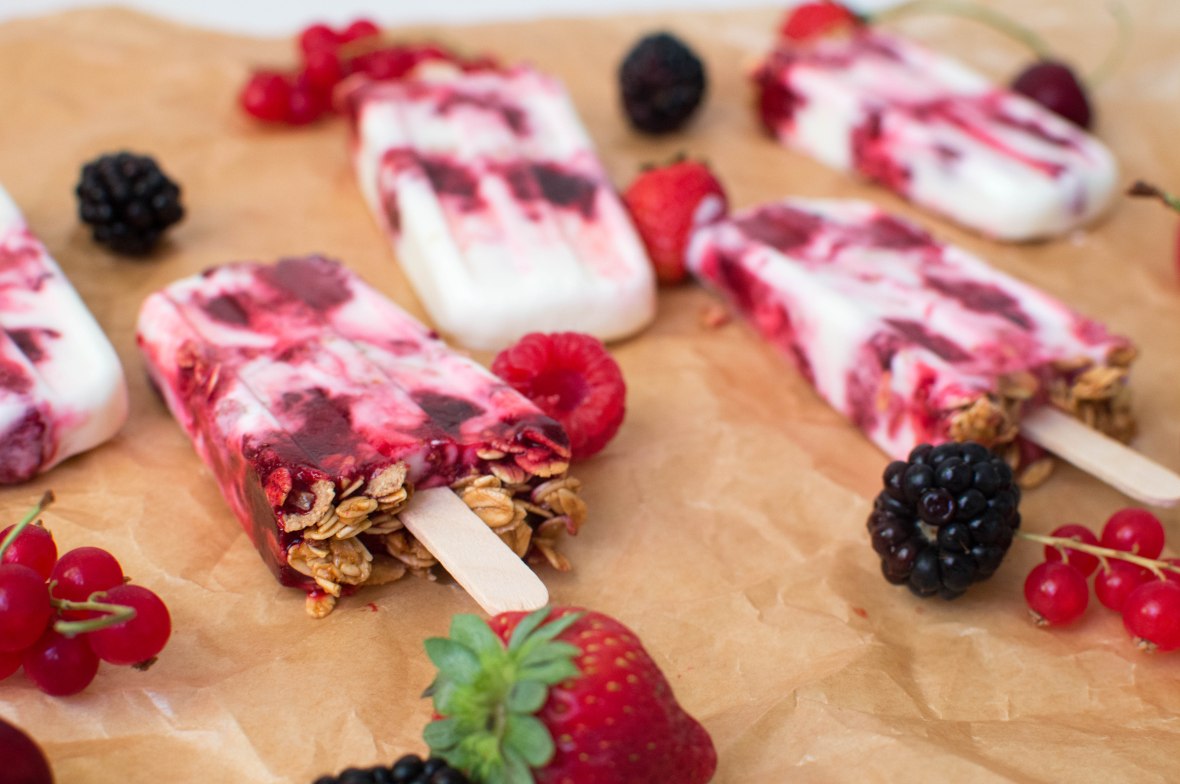 Also – it made way more than 10 lollies worth, probably closer to 20. I popped the spare mixture in some tupperware and topped it with the berry reduction and granola and it turned out just fine. 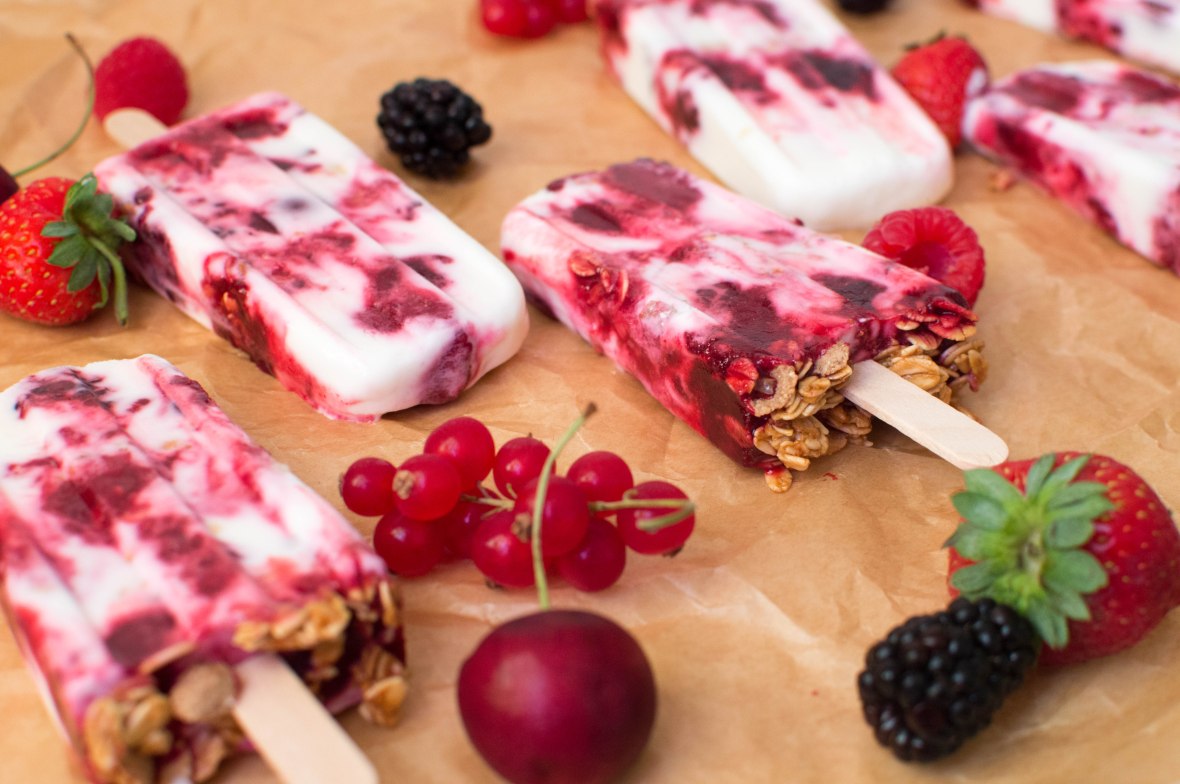 ALSO – I’ve bought so many cheapo lolly moulds over the years and quickly binned them in search of something better. This one I found on Amazon is a little pricey but definitely worth the investment. 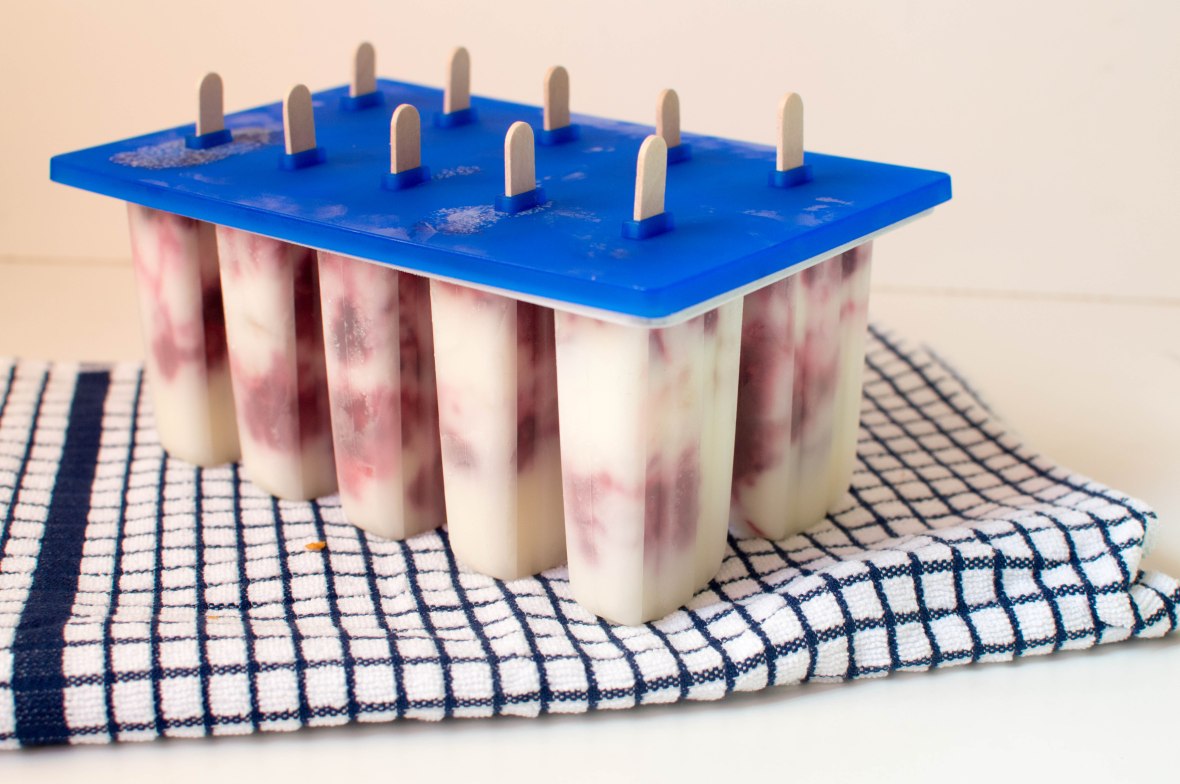 LOL @ how small it looks in my chum’s hand, don’t be deceived, it’s a good size: