We woke up bright and early on the final day of our long weekend away and after checking out of the hotel, headed on over to Gare De Cornavin.

Within the station, they have automated locker facilities where you can leave your belongings for up to a couple of days. It’s as simple as popping your items into an empty locker, closing it and paying for the charges at the screen. You’re issued with a printed ticket, which you can then scan upon collection and retrieve your luggage / bits and bobs. So efficient. We dumped our bags and proceeded onwards to find some breakfast. 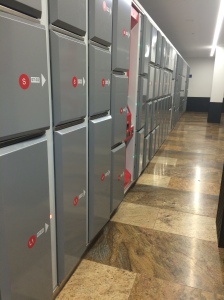 Not too far from the station we found a real treasure, Cafe Boreal. We selected some pastries and both grabbed a latte, one with a Brazilian blend of beans, and the other, the current special blend, called ‘road trip.’  To be honest, I can’t remember the last time I had a coffee so good. The roasts were rich and oh, so smooth. I only wish we’d discovered this little place on day one! 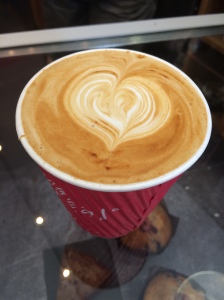 Fuelled and ready to roll we made our way back to the station from where we caught a bus (number 8) and rode it to the last stop, the foot of Mont Saleve. It’s actually across the border in France, so it’s probably best to carry your passport with you, just in case, but in all likelihood you probably won’t need it. From the bus stop, it’s a short, well signposted, walk to the cable cars… (/ you can just look up and walk towards the mountain!) There are also meant to be numerous paths that you can walk / cycle up to the top of the mountain, each varying in length and inclination, but, unfortunately, we didn’t really have the time.

A pair of return tickets cost 18CHFs, around £12, and the car cars operate every 30mins or so. We’d just missed the previous ride so sat and waited for a while. 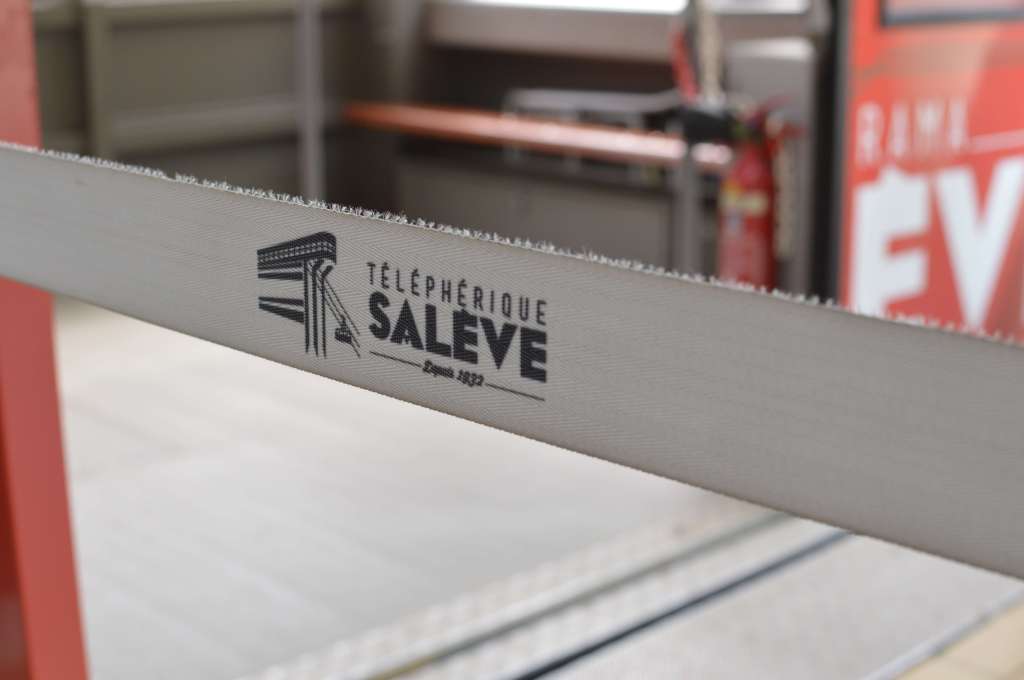 When we finally got on, the views, as expected, were amazing, and the ride was surprisingly fast! 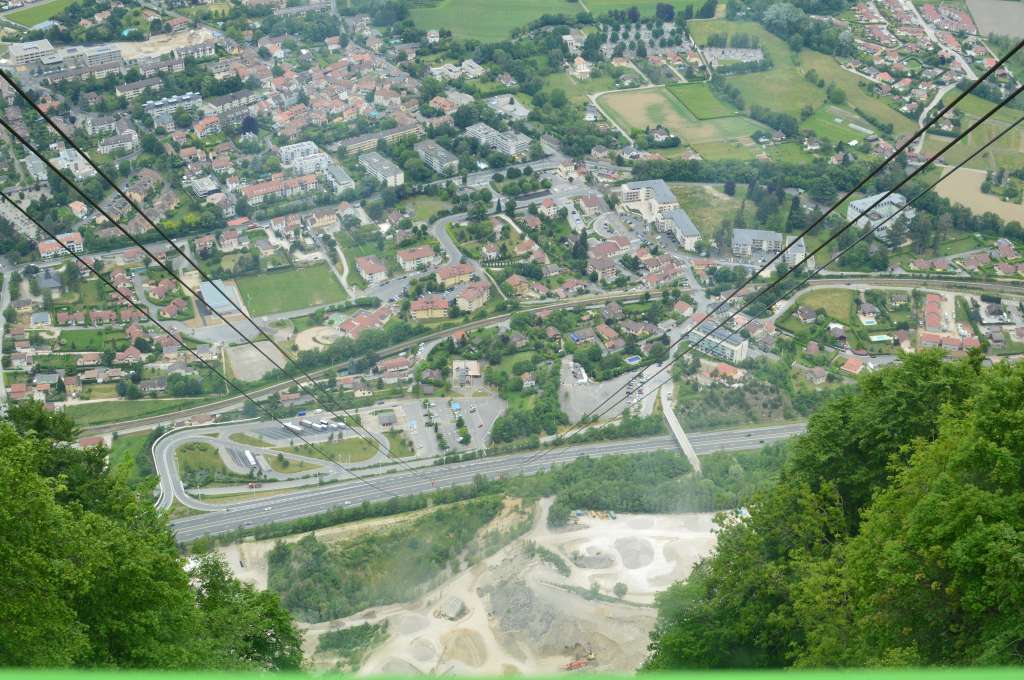 At the top, we quickly found the viewing platform, absolutely breathtaking to see the whole of Geneva from such a height. I wish it’d been a clearer day. I’m sure it would have been even more spectacular! 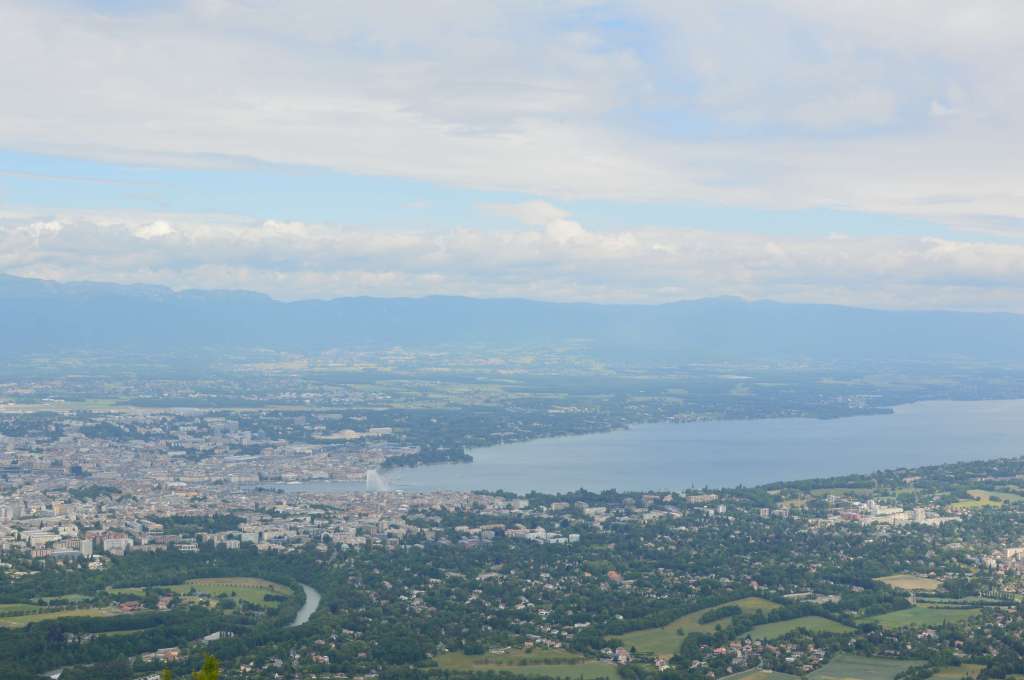 There’s surprisingly quite a lot to do up there, cafes, restaurants, a farm, and, of course, amazing walks! We followed a path hoping to find more picturesque views. The walk was on a bit of an incline, between my hayfever (I’d sneezed at LEAST 100 times by the time we’d reached the top, not even exaggerating), asthma, the lower oxygen levels up there and lack of gymming lately, it was a little tiring but completely doable. We passed a paragliding strip, would have loved to have tried but alas, my bag was full of less appropriate items like a water and a jacket… =P 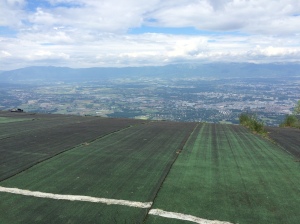 We stopped for a picture before continuing… 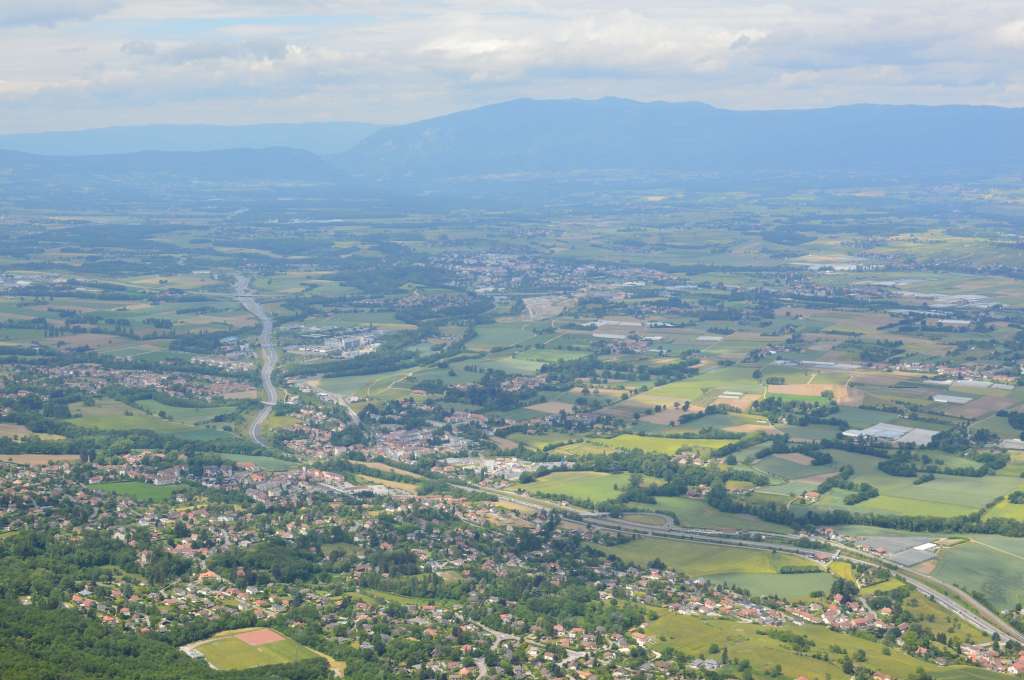 As we continued it felt like we were in the woods, not the top of a mountain. 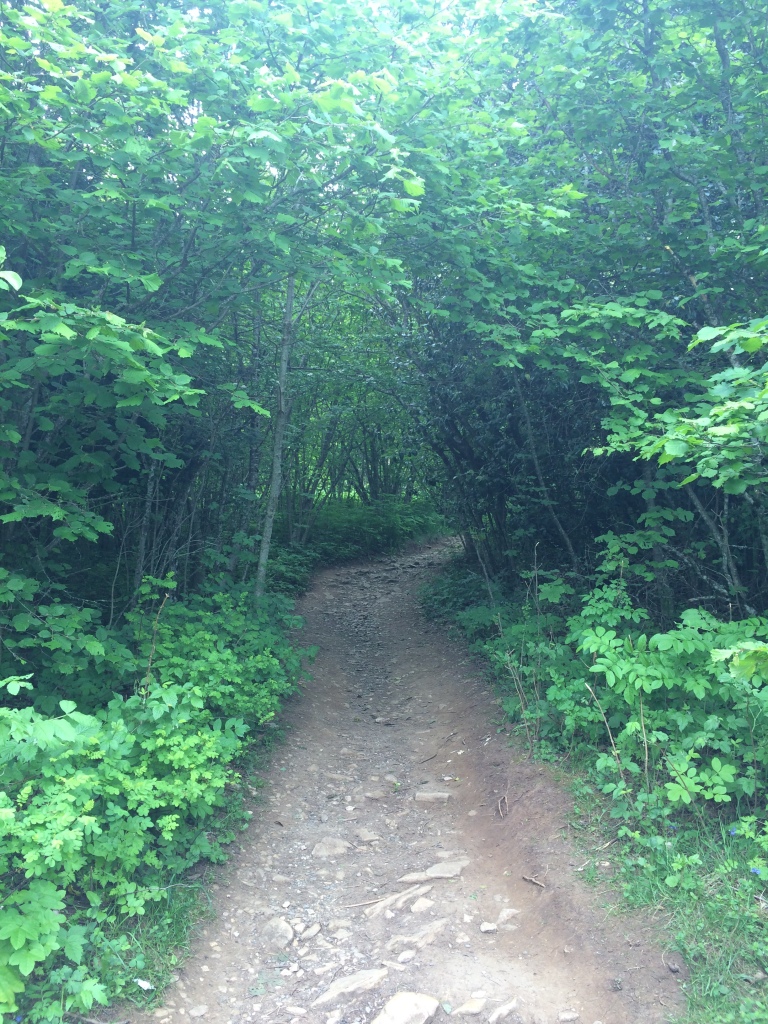 About 45 mins of walking later, we found ourselves on the other side of the mountain, with some sheep and more mountains.

The trail led on, and although we were both keen to continue onwards, we were on a tight schedule and had to start heading back…

It didn’t take us nearly as long on the walk back due to the downwards incline. Here’s a little gif I knocked up of the cable car ride back down, sorry about the quality!

We hopped on the bus back to Geneva and stopped near the shops to get some chocolate. Can’t come to Switzerland and not visit a chocolate shop right?! We ended up in Chocolaterie Auer. 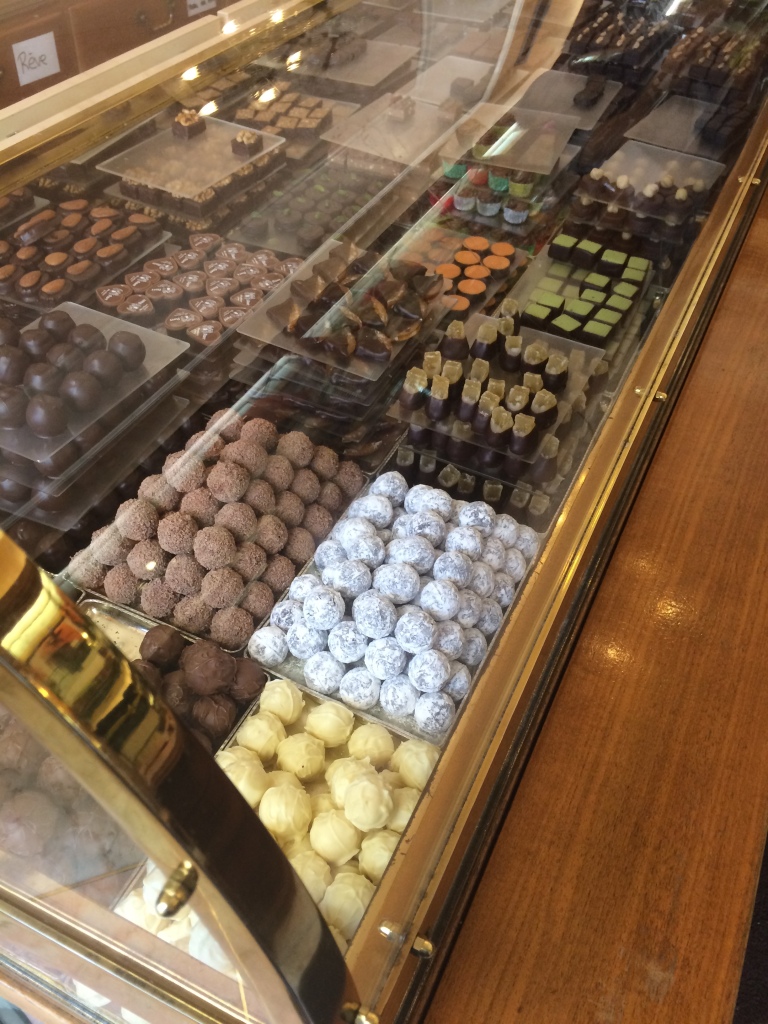 We opted for some truffles, before we had a chance to pause for thought, they were gift wrapped and ready to go. A present from us, to us? In the square box, there’s hazelnut truffles: toasted caramelised whole nuts, covered with chocolate and rolled in cocoa. Perfection. In the long box a selection of white, milk and dark chocolate truffles, intense, creamy and oh so good. 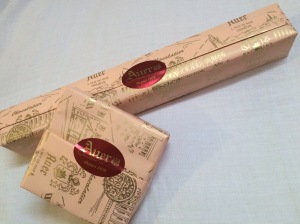 Chocolate in tow, we pottered onward to the old town. 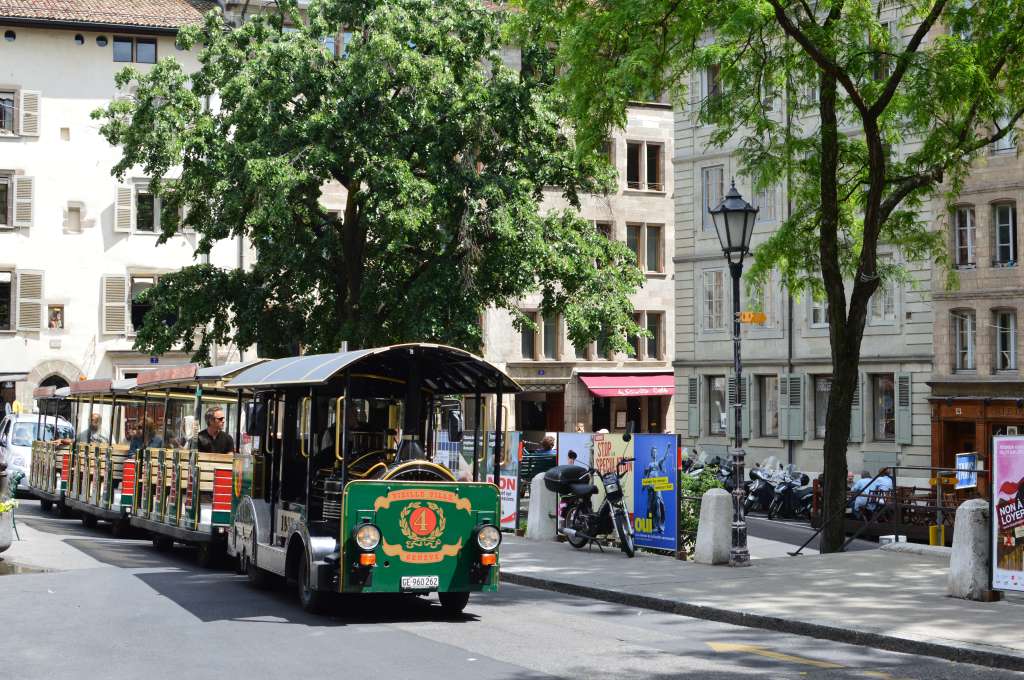 Ready for lunch, we opted for a little authentic place called Cafe Du Bourg De Four. Unlike the pizza place last night, they didn’t have an English menu so out came my bad French! 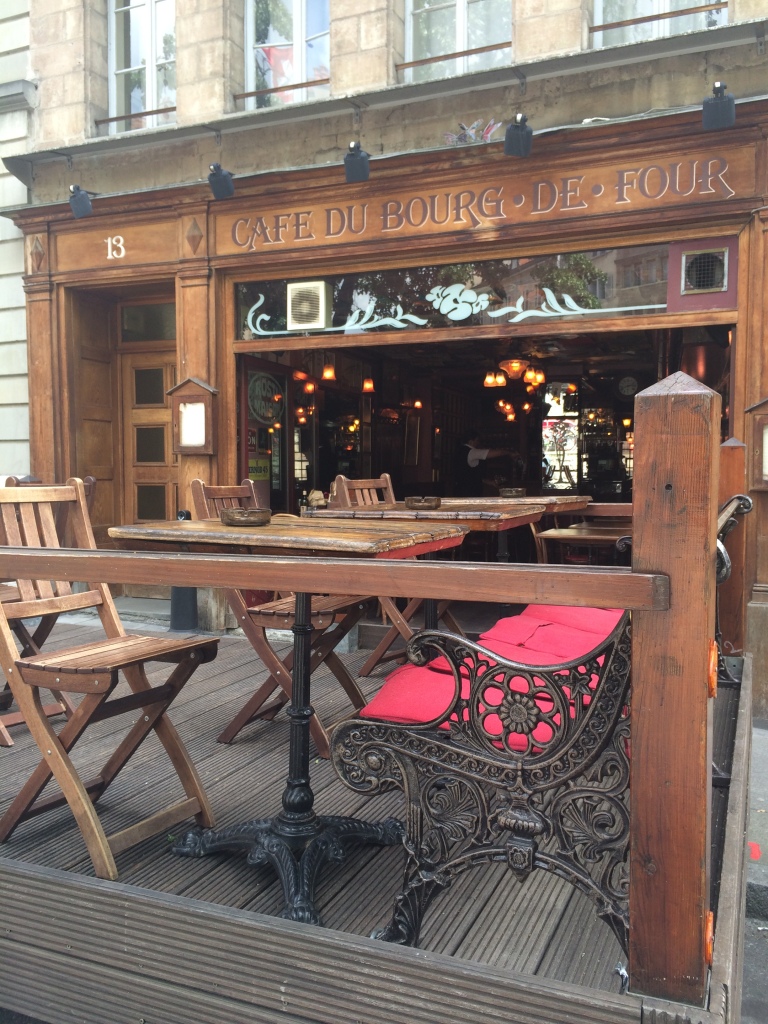 It had a nice feel to the place, and whilst the waitress was really helpful, there was no hovering over us. After we got settled in, the place quickly got filled with locals. I opted for a rosti – light, crispy grated potatoes mixed with softened onions, and cheese, packed together and fried until crisp, and topped with two eggs!

Best potato rosti I’ve ever had the pleasure of eating.  So good, but way too much for one person, just as well, I was sharing with Mr Man!

Mr Man insisted that arrabiata is different everywhere and after enjoying it so much last night decided to order another plate.

Amazing, amazing, amaaaazing! Perfectly al dente, rich sauce with just the right level of spice and a hint of sweetness in there… Dreamy!

We left with smiles on our faces despite being a pricey £50 out of pocket and headed on back to the train station. We popped into Migros, a large Swiss supermarket chain, and grabbed some more chocolate and some cheese before retreiving out luggage from the lockers. 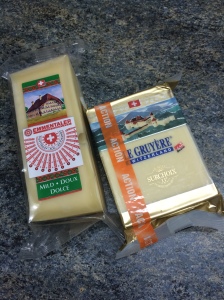 And with that it was time to head home.

Goodbye Geneva, thanks for being so good to us! (+ holding off the rain till we were departing).