After a well deserved lie in, on day 2, we began our day once more, admiring the view from the balcony.

We left the flat looking for somewhere to exchange money. A tip would be to only exchange a small amount prior to arriving, we changed something like £50 before we got there, enough for the cab, dinner for the first evening and then some. The exchange rate is a lot better once you’re there so it makes sense to change the bulk of your hard earned cash in Turkey… We also purchased a pair of Istanbul cards (travelcards) which, I also recommend, if you’re planning to frequent the trams / boat services / cable cars etc. You’ll make your money back in no time. The alternative are fixed fare tokens which are almost twice the price of an average card tap. Each journey varies in cost – not entirely sure what it’s based on but since you never tap out, probably the location you tap in at and time of day.

We started our day at the Grand Bazaar and pretty much got lost in the various different twists and turns, in my opinion, that’s half of the fun! You can find pretty much anything here – from food, to spices, to gold, to rugs, to great leather bags / jackets… But be prepared to haggle! These guys knock up the price, sometimes by as much as 50% or more so it’s really worth shopping around. Here’s a couple of snaps:

Once we’d decided we’d had enough we whipped out our phones to find the nearest exit! We both downloaded an app called City Maps 2Go which is pretty self explanatory. It allows you to download maps onto your phone so you can access them offline. I think Android users already have that functionality included in their Google Maps app but Google haven’t extended that functionality to iPhones as of yet. Whilst I know there are work arounds, this isn’t a tech blog so I’m not gonna delve into that.

By this point, it was pretty much time for lunch and we continued walking to an area called Sirkeci – we quickly found one of our favourite places from the previous trip, Kasap Osman. We had our hopes and expectations sky high – and we weren’t disappointed. I opted for the Iskender kebab and Mr Man went for a wrap plate:

Firstly, I want you all to understand, all in all, I am not a meat lover. In fact, I actively avoid it in general, always opting for chicken or fish instead… But, here, I can proudly say I happily cleaned my plate. Iskender kebab, where do I begin?!? Shavings of lamb cooked on a vertical spit, smokey, juicy and tender, laid on a bed of bitesized flat bread before being topped with a tomato sauce and doused in butter. The bread is softened and moistened by the lamb juices alongside the tomato and butter, making it the perfect accompaniment. There’s also a generous dollop of yoghurt on the side which helps cut through that richness. SO, SO GREAT! You can also see in the picture I opted for an ayran which is a salty yoghurt based drink with the same idea though needn’t have bothered as I had plenty of yoghurt on my plate. In fact, I found myself leaning over and grabbing Mr Man’s fizzy drink a fair bit!

He on the other hand, opted for a lamb wrap plate, which of course, I just had to sample! The same lamb shavings were placed into a wrap with a medley of peppers and topped with gooey melted cheese and the same tomato sauce before being heated. It was also served with a helping of fluffy white rice and tomato flavoured bulgur wheat. In general Mr Man and I aren’t big on rice… But once more, the Turks have made us reconsider!

We left Kesap Osman’s feeling very satisfied and continued on our long day of walking around the city. We found ourselves crossing the Galata bridge, which has two levels – on the top you’ll find the tram track alongside, cars making their way across. The pavement is full of locals lined up with fishing rods catching fresh sea food and lots of random people selling everything from nuts to flying peacock planes… (you have to try the pistachio nuts – so good!!) Beneath you have another floor to the bridge lined with restaurants serving the freshest seafood, bit pricey but the view is incredible. I’ve put in two pics – the second one you can kind of make out both levels… 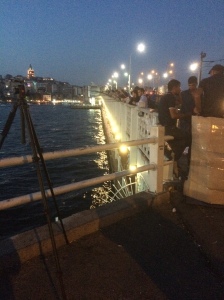 We continued walking and past the Gatata Tower (great view from up there): 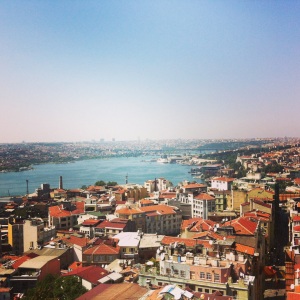 Soon we found ourselves on Istiklal Avenue which is a lively walk ending at Taksim Square with a cute tram which pretty much just goes back and forth up the street.

We grabbed some ice-cream along the way, the Turks call it dondurma and their version has a different texture – very stretchy / chewy. They love playing tricks, pretending to drop it when handing it over, sweeping it out of your hands before you get a grip of it and generally fooling you around. Here’s a picture of a stall owner prepping a fresh batch which I managed to get a picture of later in our trip:

Once we got there we sat down on a grassy hill, looking down at the hustle and bustle and just watching the world go by to be honest. Once we were rested Mr Man decided it was time for one of his favourites – an Islak burger, A.K.A. a wet burger. These things are pretty much a Taksim Square staple with a whole row of shops offering these. The fluffy white bread rolls are slathered in a garlicky, slightly oily, tomato sauce before being kept in a glass steaming box making it soft and wet… Great street food! 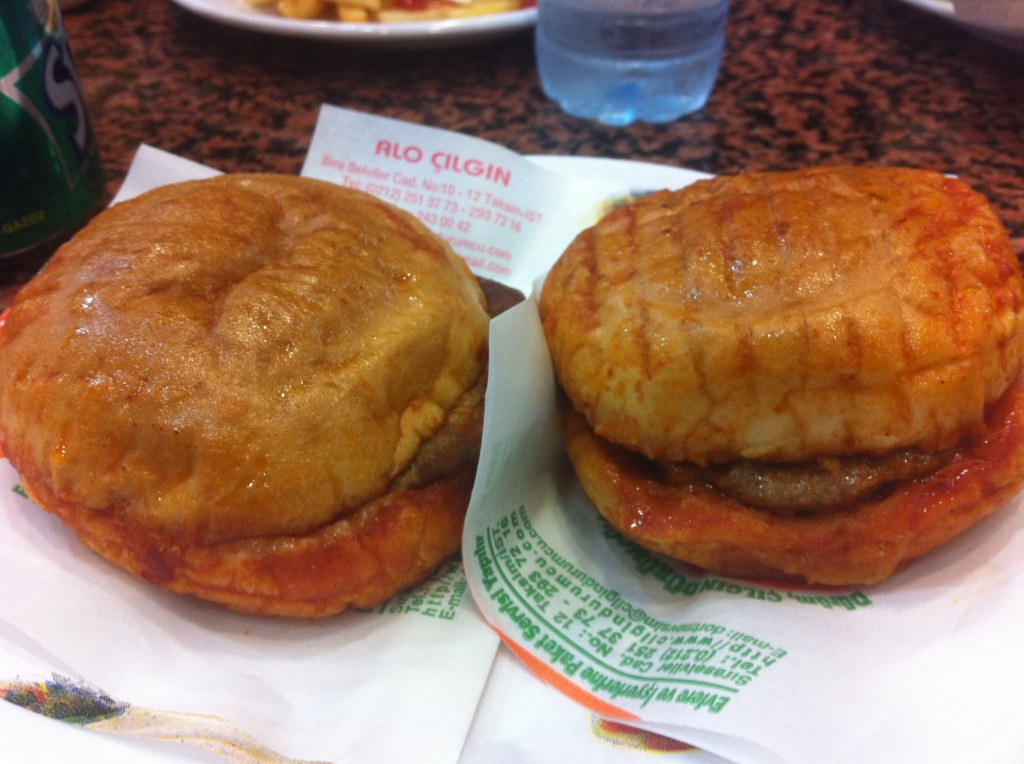 At this point we were completely exhausted so began heading back. We reached a clearing and were greeted with this incredible sunset view by the bosphorus. We quickly located a little street cafe to watch the sun go down with a warm cup of turkish tea before heading back to Sultanahmet.

All in all day 2 was just us getting reacquainted with the beautiful city of Istanbul and just absorbing the atmosphere – we spent the bulk of it on our feet, from the grand bazaar to Eminonu, to Sirkeci, to the galata bridge, to Taksim for the evening before returning for further walks around the Sultanahmet region.

We had a fairly early night, in anticipation of our island hopping on day 3. I’ll try have that post up over the weekend.