Sorry I’ve been off the radar for a few weeks. Between a cheeky little escape to Roma, being really ill (presently, I sound like a man and am reaching for my inhaler far too frequently) and various other life admin type tasks, blogging has taken a back seat. But I’m back now and resuming with a quick round up of our Italian holiday!

A couple of pointers before I start, for anyone who is planning a trip anytime soon:

So now that that’s out of the way, let’s get on. Two weeks ago, Mr Man and I arrived at our cute little AirBnB flat on a slightly damp Saturday evening and got settled in. 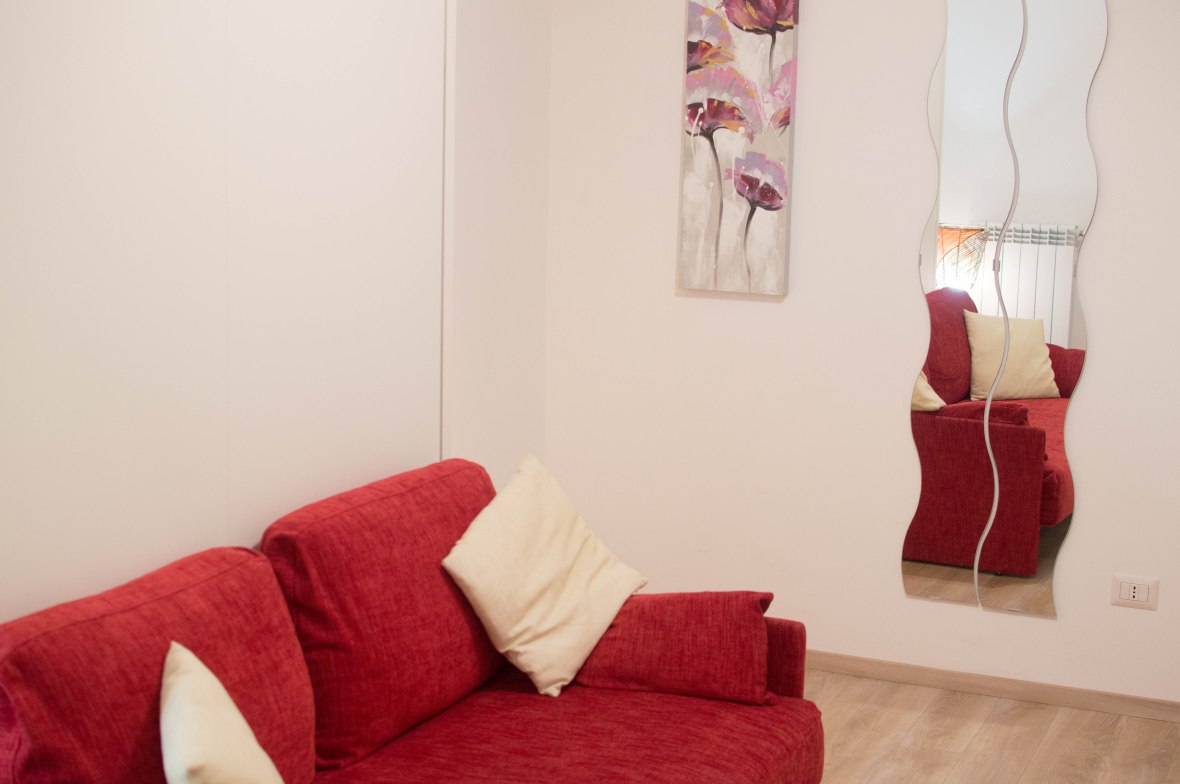 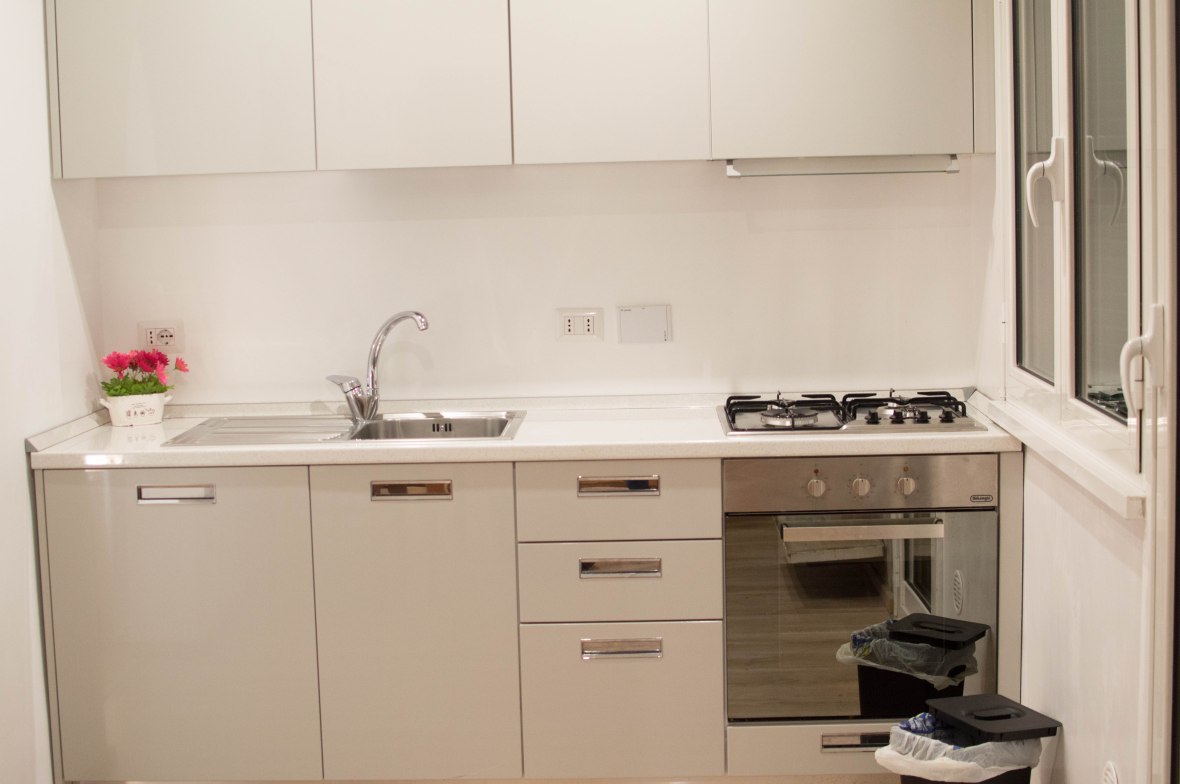 After the long journey, I say long, but, in reality, it was only a few hours, we were both starved! We headed out in search of dinner and settled on somewhere nearby – Trattoria Zampagna. The place had a really nice homely feel to it with simple decor. Stupidly I forgot to take a picture of the actual restaurant. (Soz.)

Promptly after we’d sat down, the waiter came to take our drinks order, I went first and just as I’d finished asking for some sparkling water, off he went. Mr Man raised his eyebrow, and before we’d had a proper chance to try and figure out why he hadn’t bothered asking him what he’d like, he reappeared with a big bottle for the table… We later realised that this was the norm in Rome.

^ He’s not a big fan of fizzy water, so ordered a coke later.

We shared a truffle bruschetta starter, it was  a little soft and chewy despite the char, I expected it to be crisper, however, the flavours were good with a hint of garlic coming through. Everyone else, however, seemed to be ordering the fried artichokes, so I think we may have missed a trick there.

For our mains, we both went for pasta. Mr Man opted for the plain and simple tomato and basil, or pomodoro e basilica, while I chose the local speciality, cacio e pepe, translating to cheese and pepper. The pasta was perfect, homemade, good texture with a little bite to it, however, both sauces were a little too salty for my likings. (Not sure if they’d cooked the pasta in salty water and not drained it off properly before tossing in the sauces or something? Who knows.) 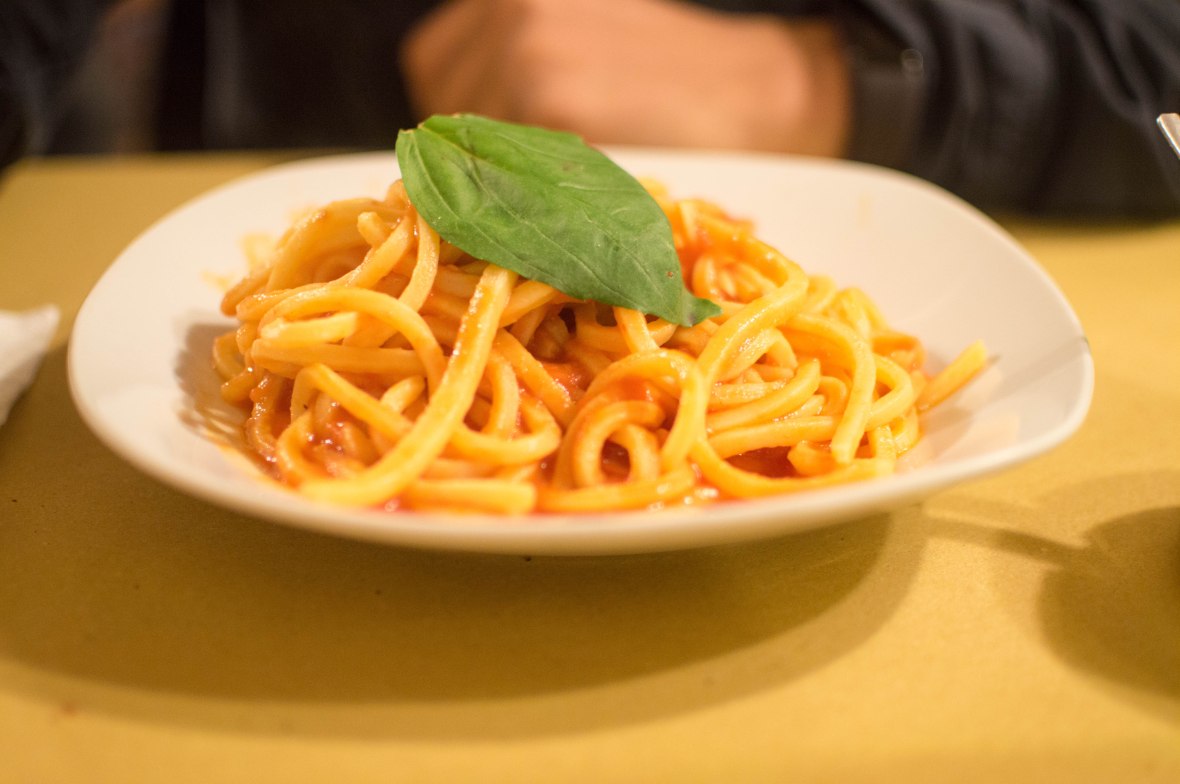 The tomato sauce was both rich and light. Perfect partnered up with some parmesan.

The sauce was rich, lots of fresh pepper, amazing how good three simple ingredients can be. I did, however, miss the expected crispy cheese lattice that I’d read about online…

Full and tired, and ready to crash we asked for the bill which came with some complimentary apricot cake. Well flavoured but a tad dry and almost finished before I remembered to take a pic, ha!

Overall a decent meal but somewhat disappointing. I think my expectations were sky high being in Italy. Especially since I still lust after some of the stuff I tasted in our last visit, Venice in 2012.

My shabby night photography on our walk back to the flat – Basilica San Paolo.

We woke up the next day, bright and early, and I hop skipped and jumped to the balcony / terrace to be greeted by to an overcast, gloomy morning. I can imagine it’d be so much more pleasant on a summer’s day.

We headed out to explore with nothing really planned. The lift in the building was so old!

In fact, the whole building was really old.

The entrance / exit. So much graffiti in Rome, I mean I quite like graffiti but most of what we saw was just abysmal. 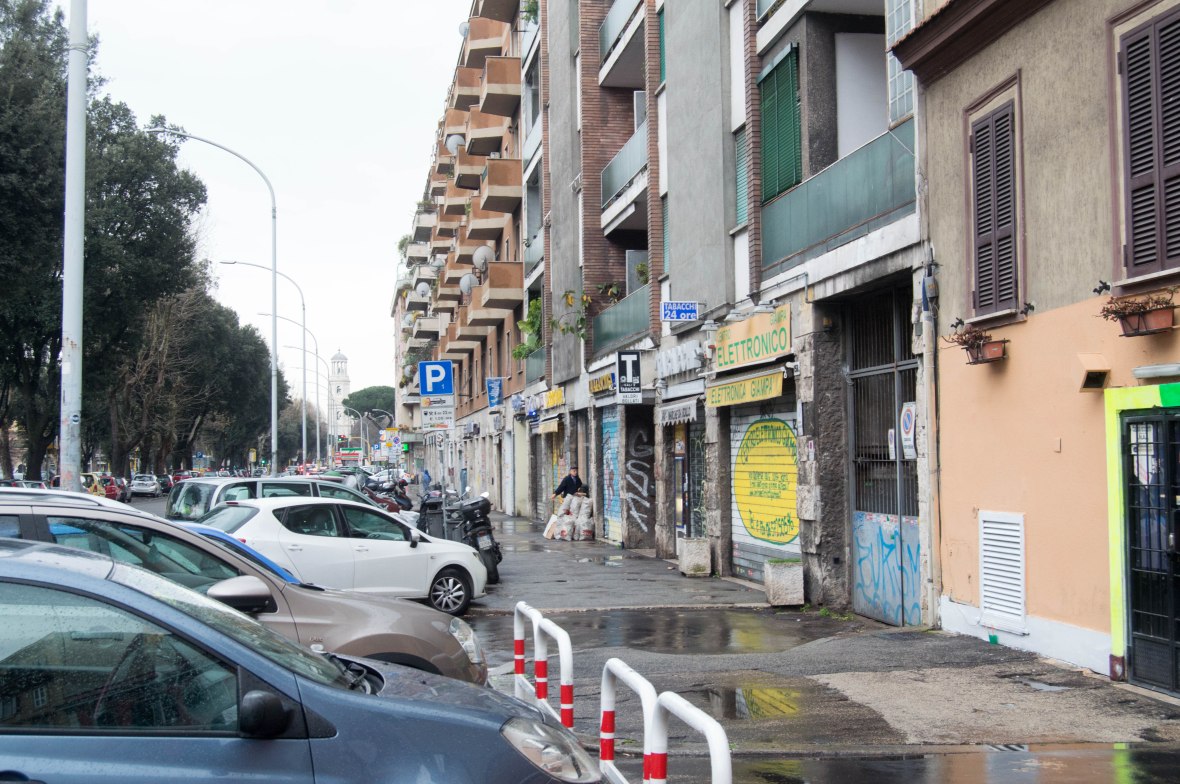 Anyway, we hopped on the train and randomly picked a stop – Cavour. In need of some breakfast, Mr Man immediately made a beeline for the nearest cafe, Ciuri Ciuri. 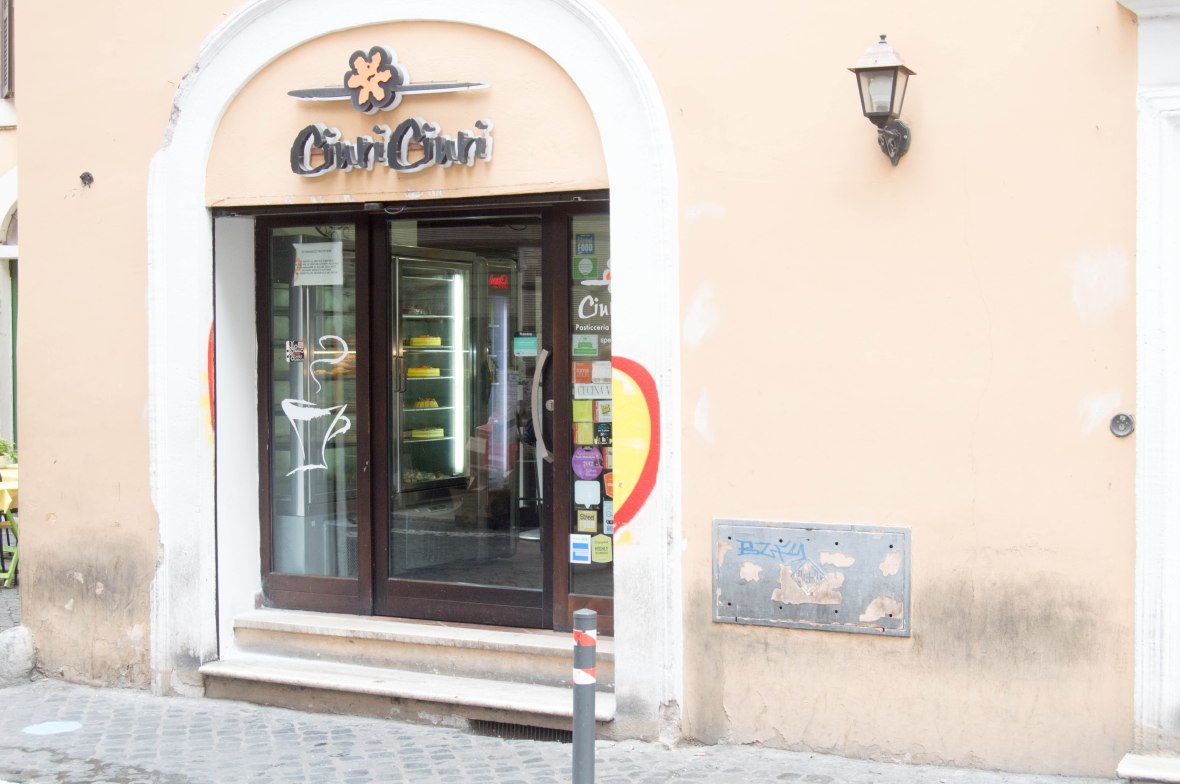 We headed in and ordered a few pastries to sample and share as well as a smooth but lukewarm coffee which apparently I neglected to photograph.

Delicious. My fave was the chocolate cannoli.

Stomachs filled with pastry cream and caffeine, onwards we continued.

How pretty are these stairs?! And, the ivy growing on the buildings.

How amazing will this look in the summer?!

We stumbled upon Basilica di San Pietro in Vincoli. 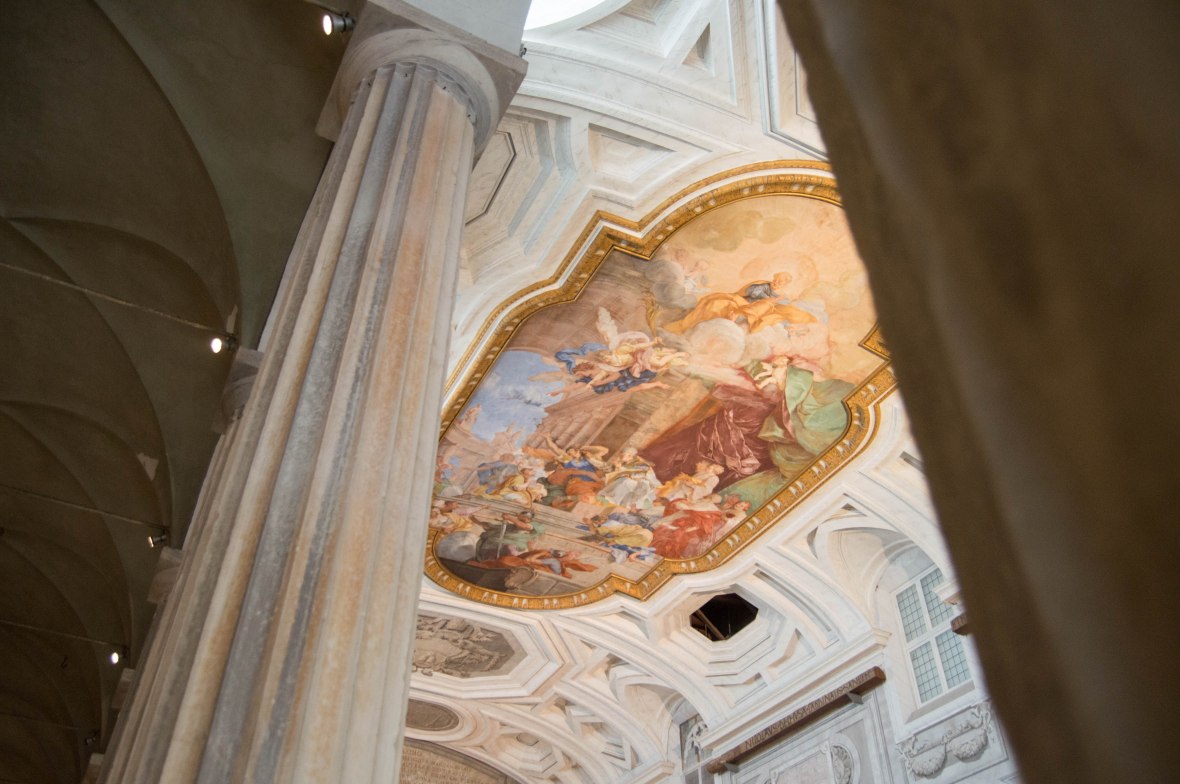 And of course, Michelangelo’s statue of Moses:

We kept walking, taking it all in.

Somehow, completely unexpectedly we stumbled upon the Colosseum itself. I think we just stopped here for like 20mins just drinking it all in. 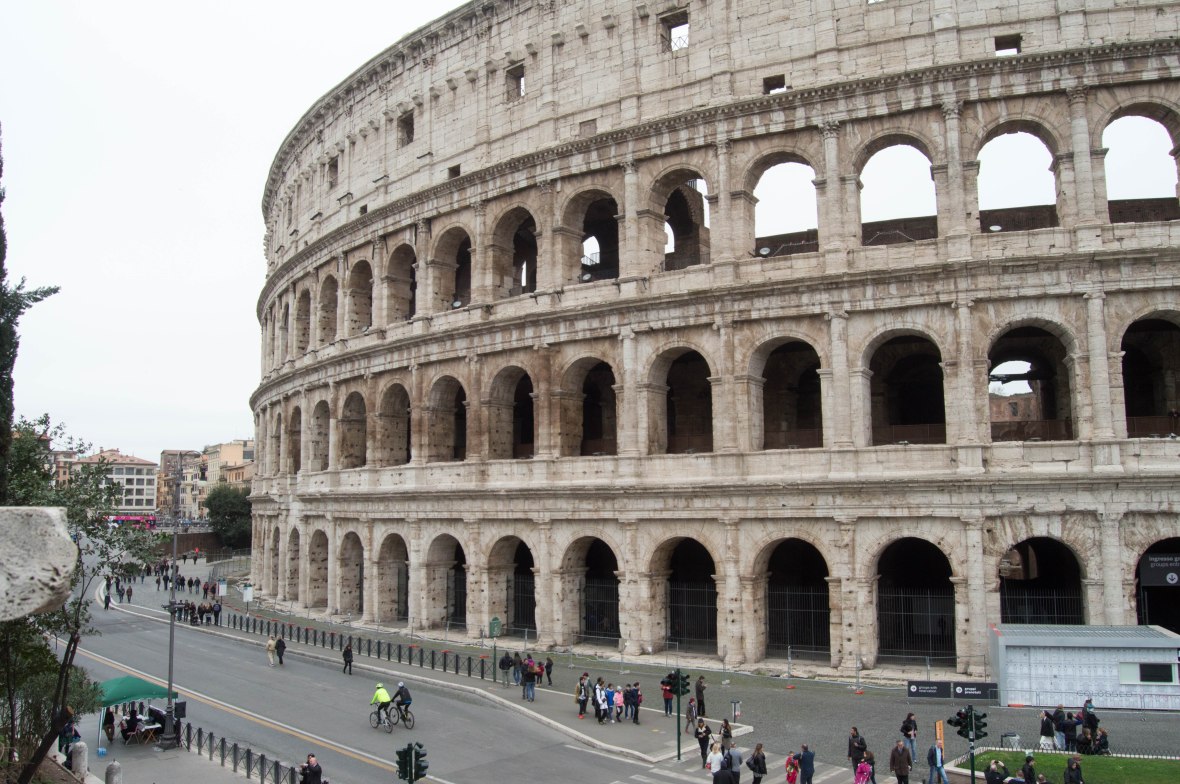 Magnificent. We’d prebooked our tour and guide for our penultimate day so onwards we walked. 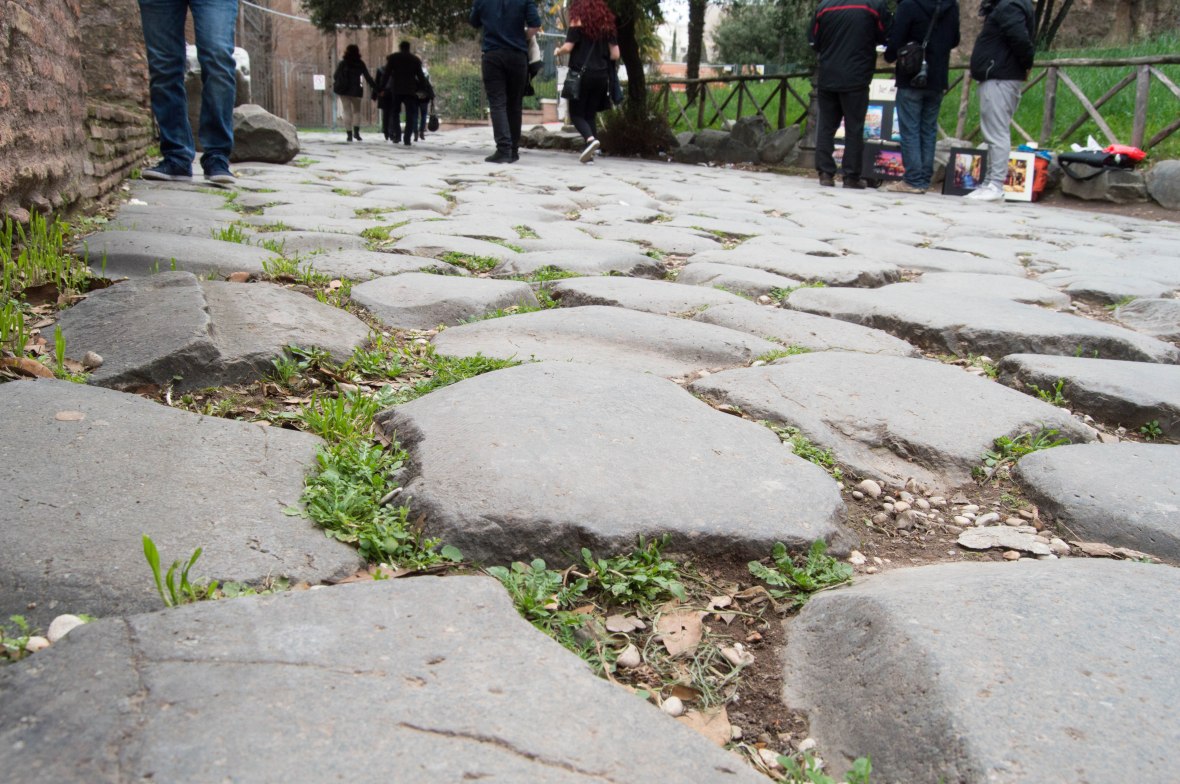 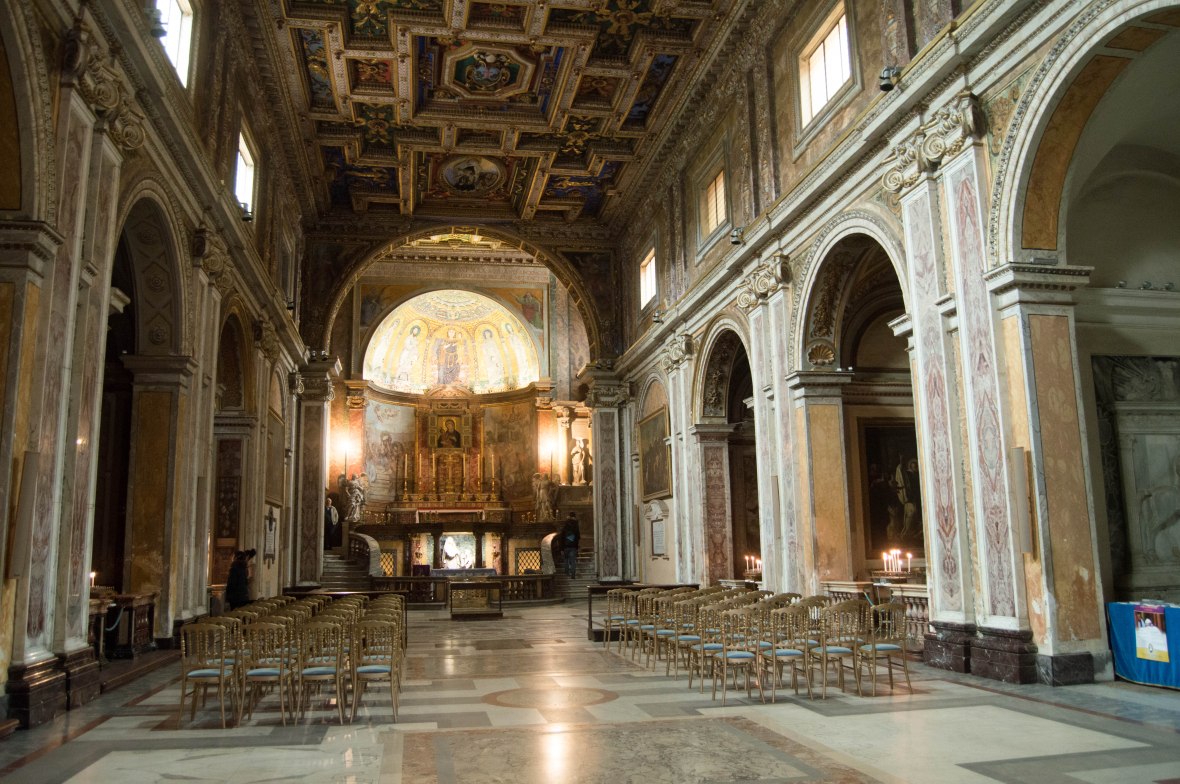 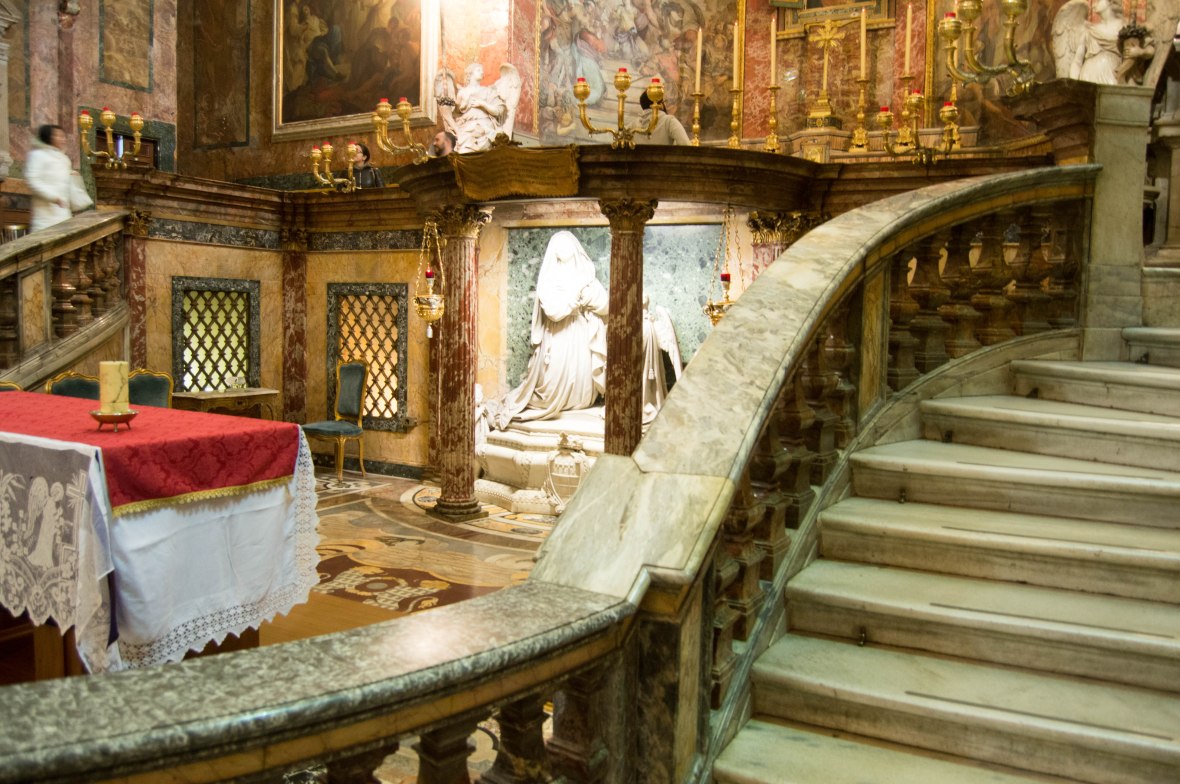 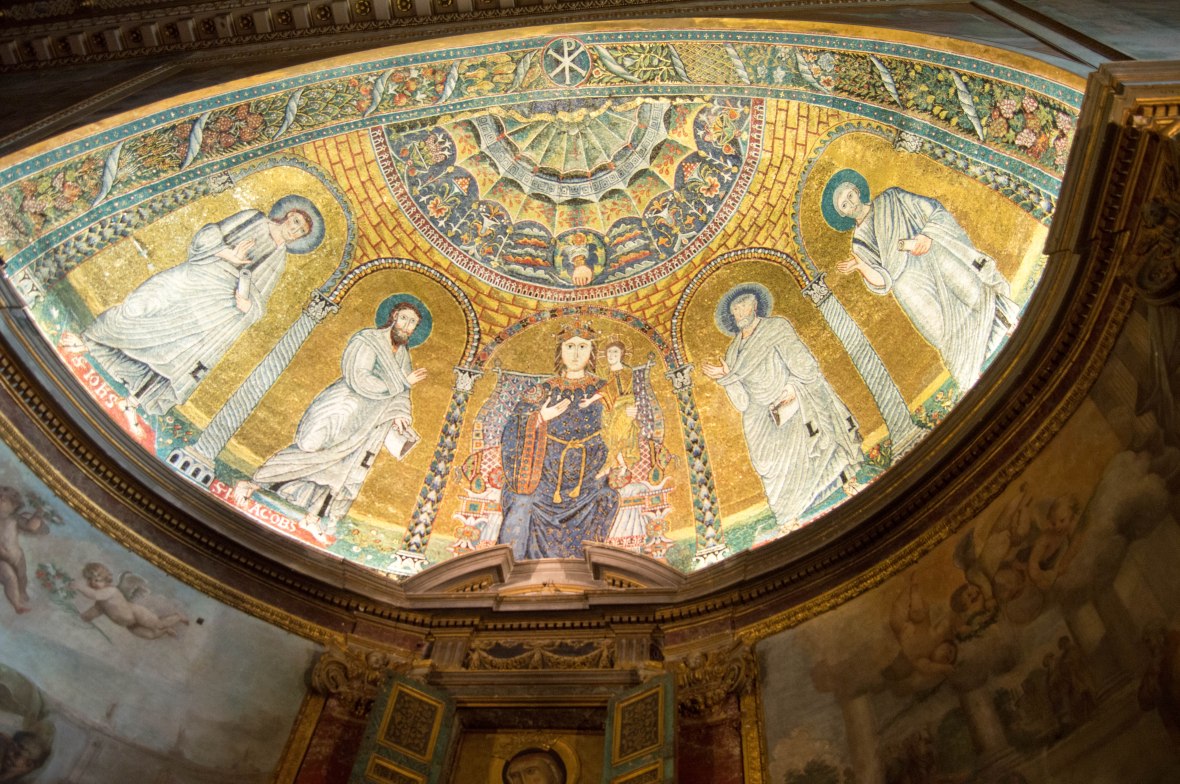 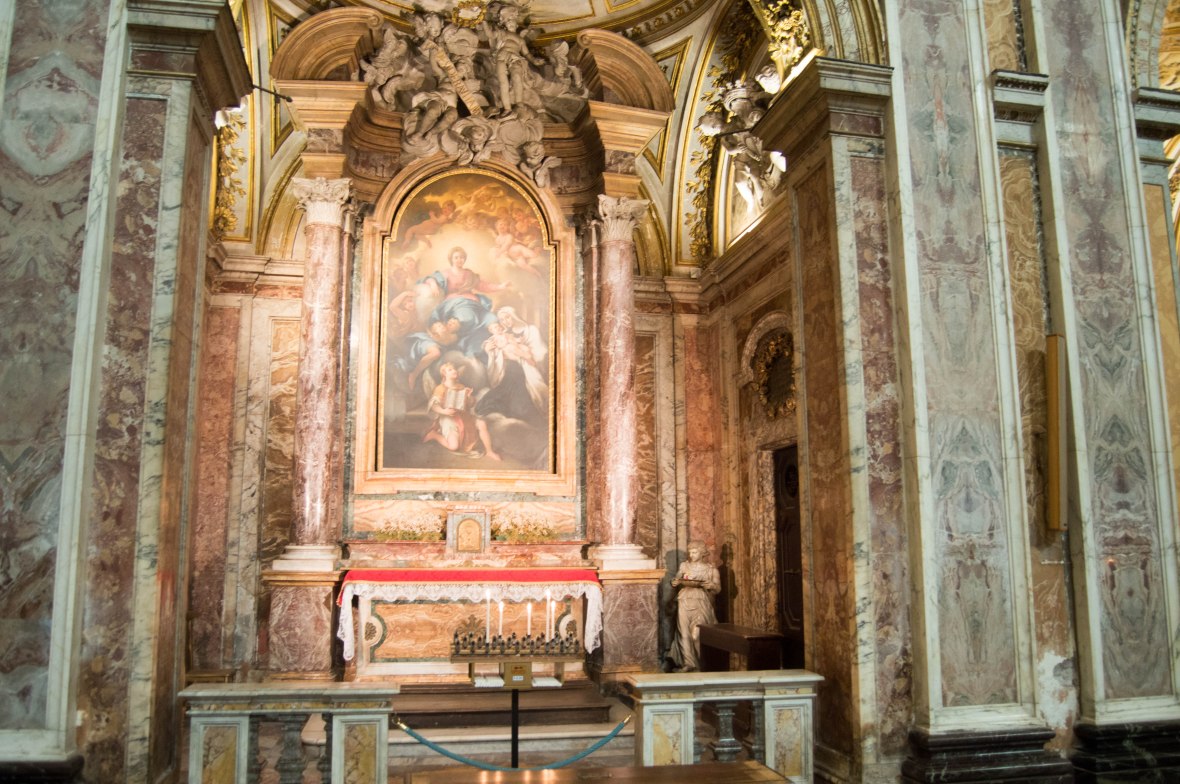 Contrasts so much with the South American street parade / carnival outside… 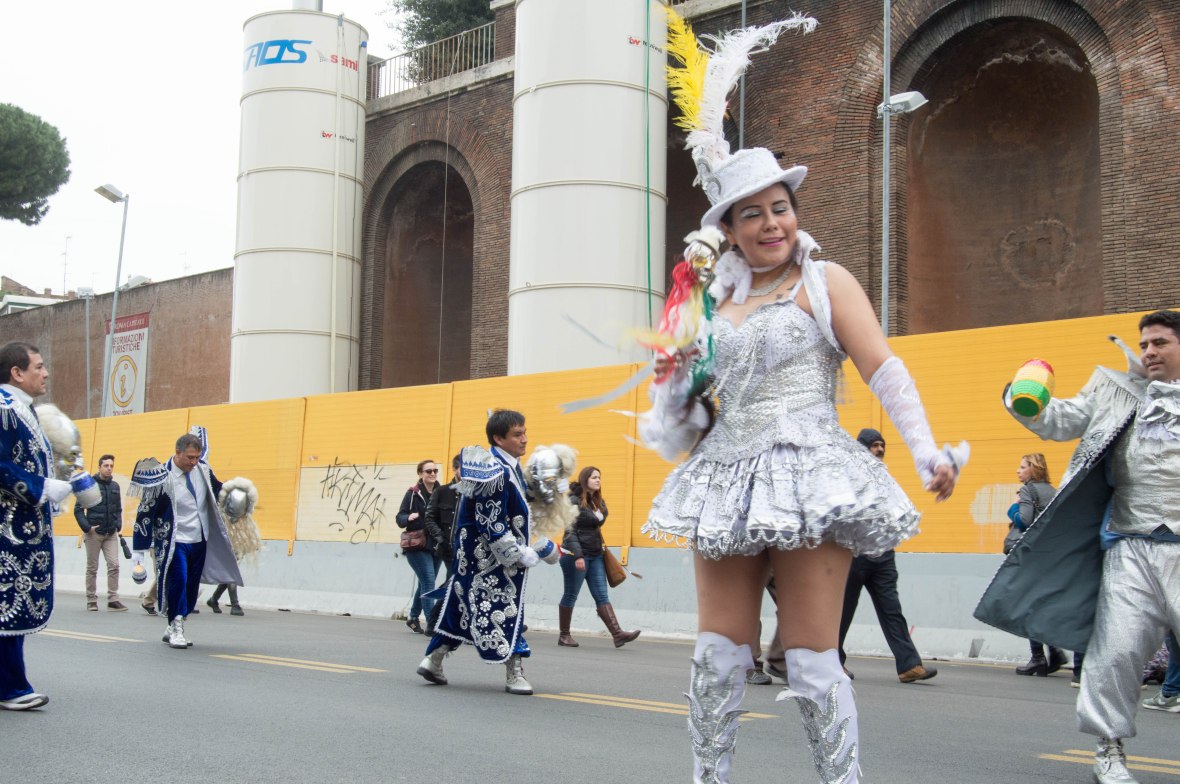 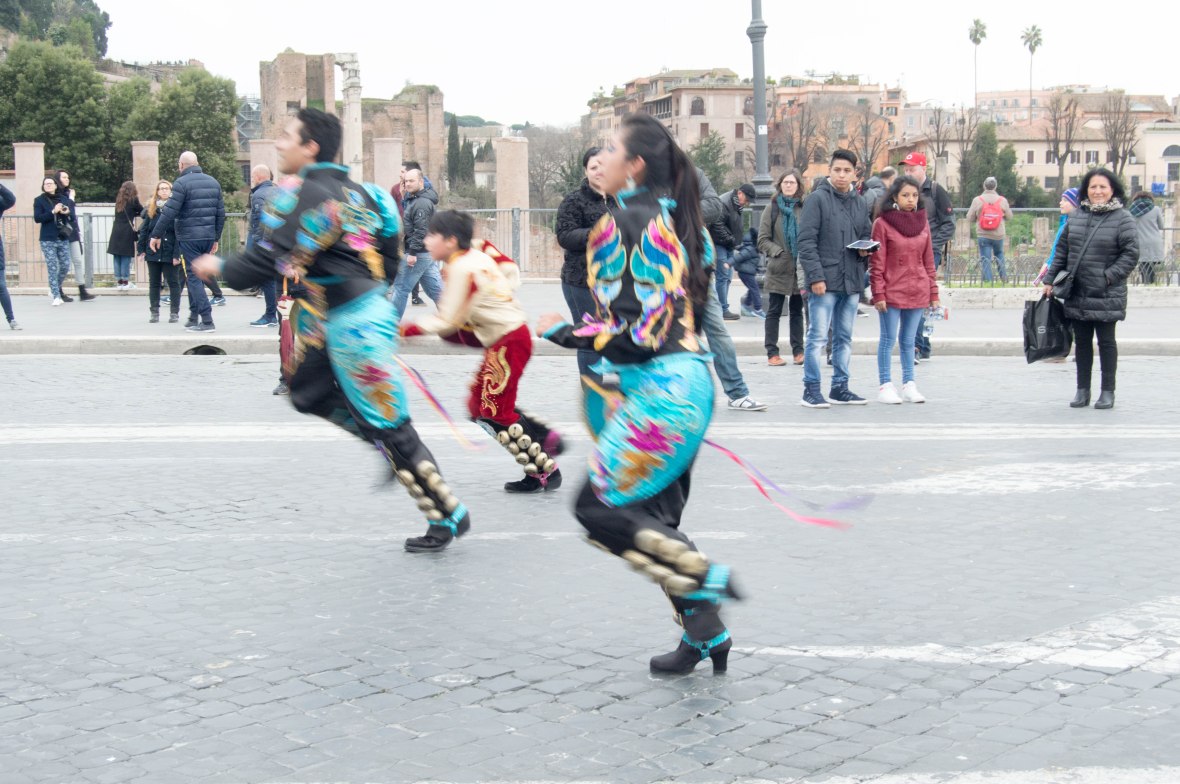 Such fun to watch.

We kept walking and stumbled upon more crumbling ruins… 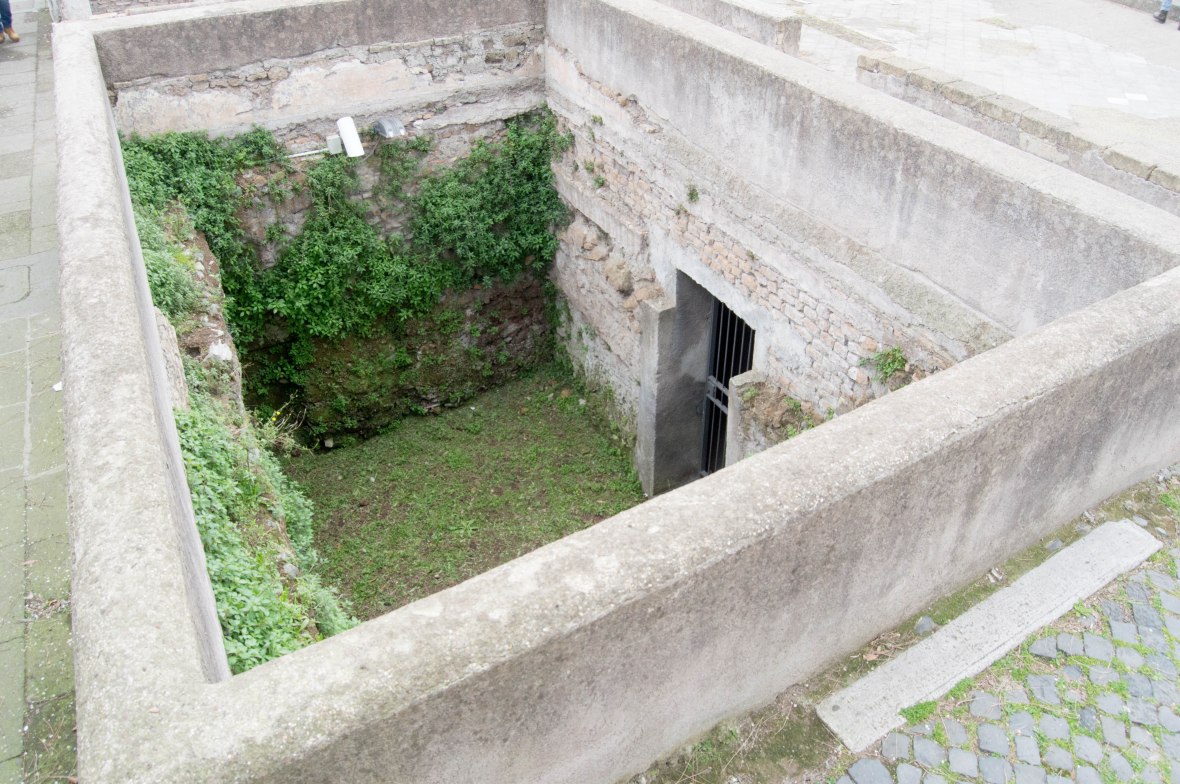 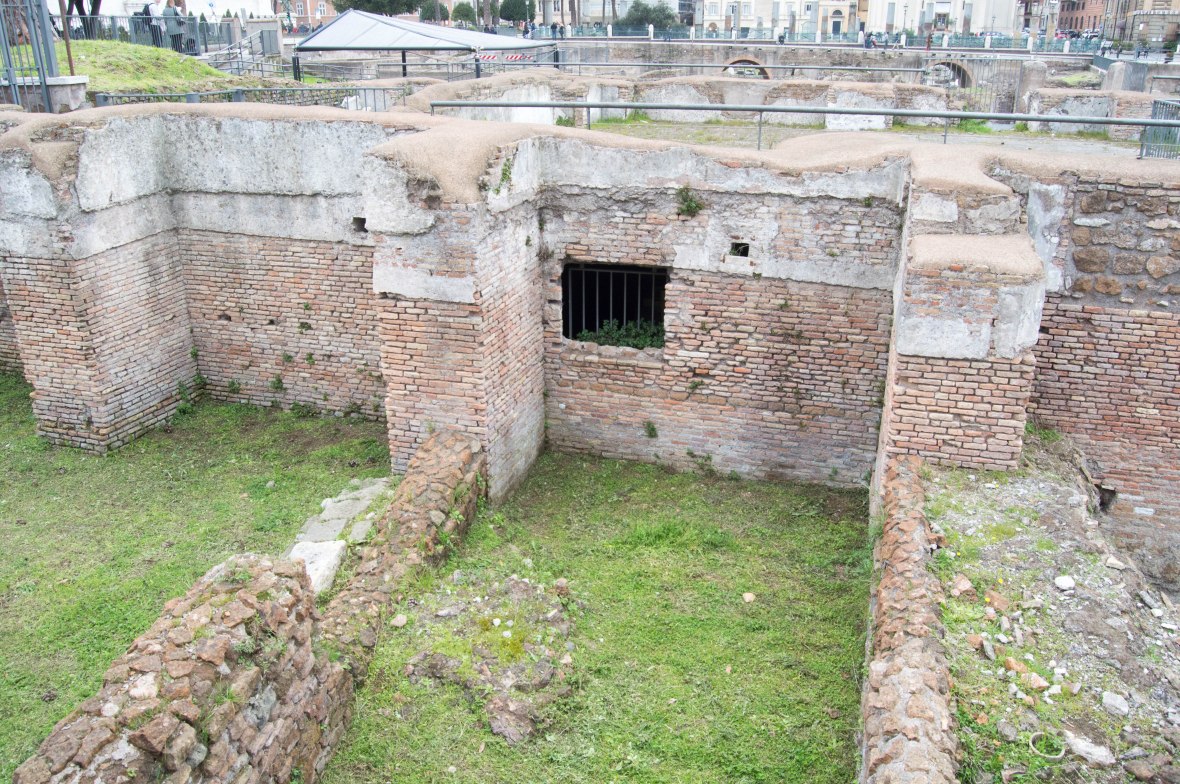 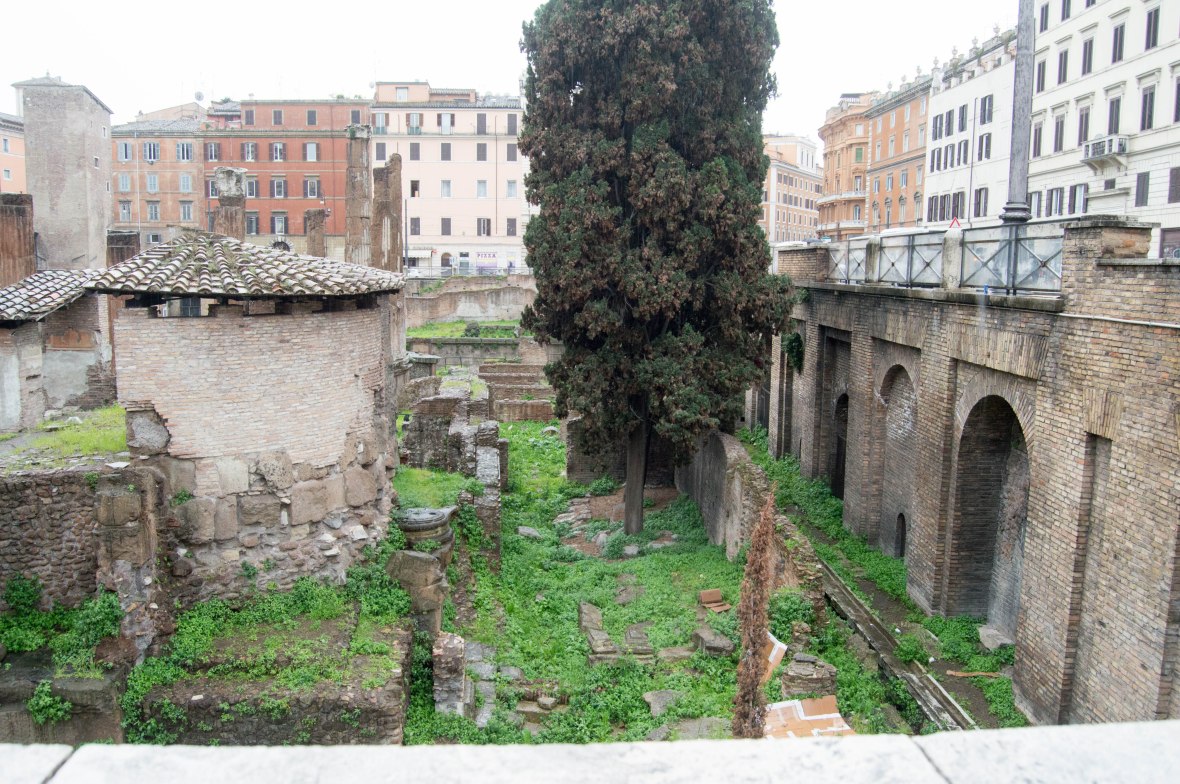 ^ Trajan market – this was once full of shops and taverns.

Next stop, the Pantheon. At this point, it had started properly raining and we picked up a brolly from a random seller on the roadside.

It’s probably one of the best-preserved buildings from the Roman era. Originally a temple dedicated to all the divinities before being adapted to serve as a Christian church.

The ceiling is a perfect dome with a large oculus, almost 9 meters in diameter, and is the only source of light for the building (well besides the doors) – such clever architecture. Also, it looks a lot smaller than 9m when looking up, I assure you!

The rain coming through the roof was not an issue thanks to the underground drainage system. They clearly thought of everything! 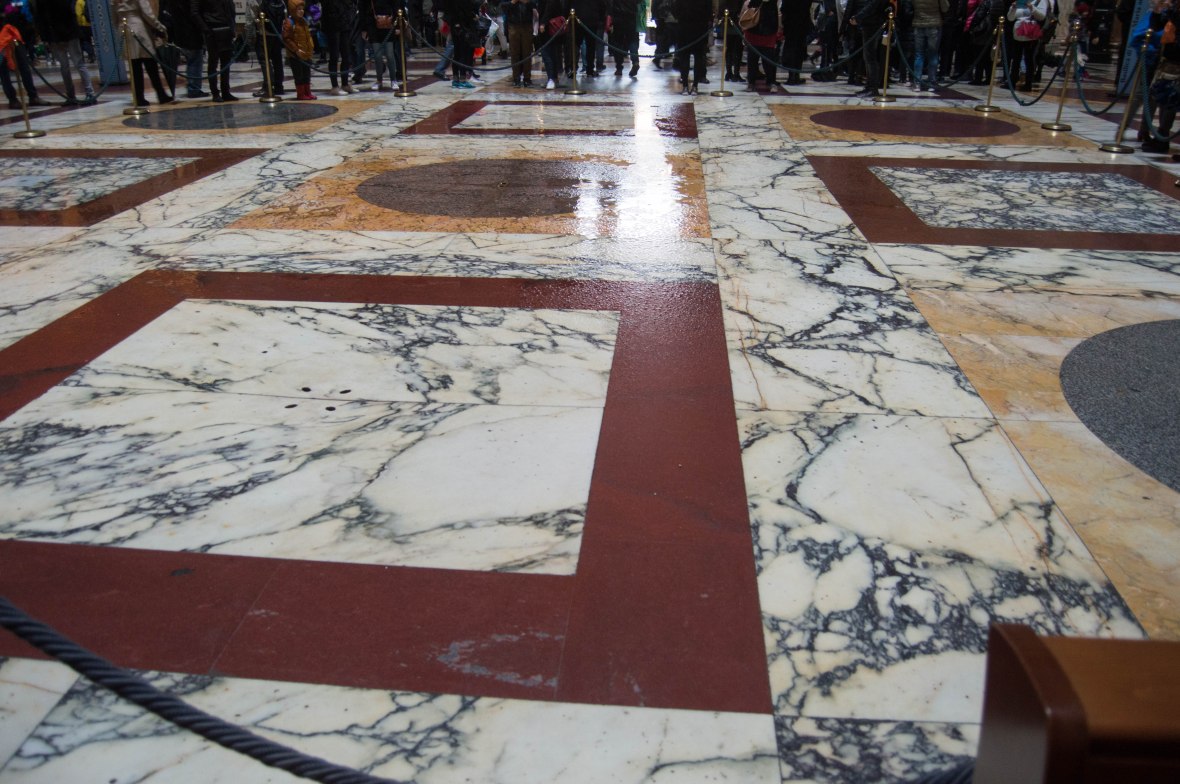 With the rain really pouring down we headed a little further to see Trevi fountain which is a short walk away. 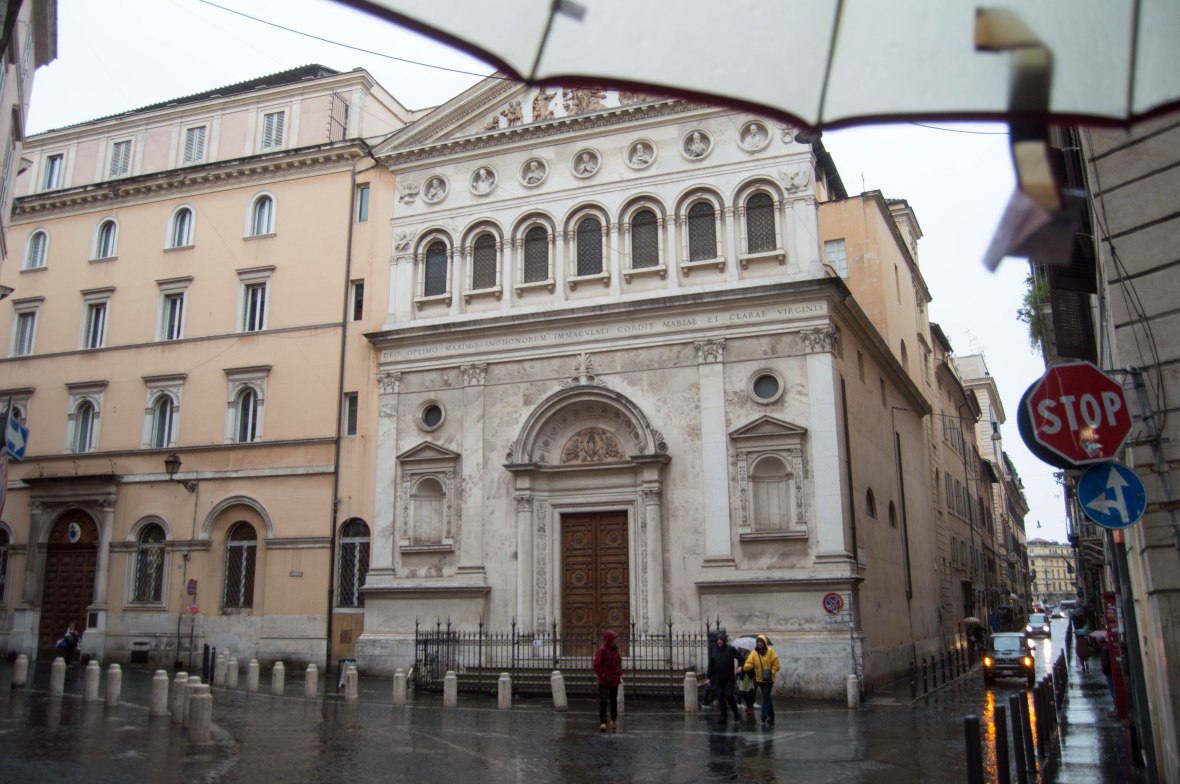 (Ha – seem to have caught the corner of the umbrella in the shot above). 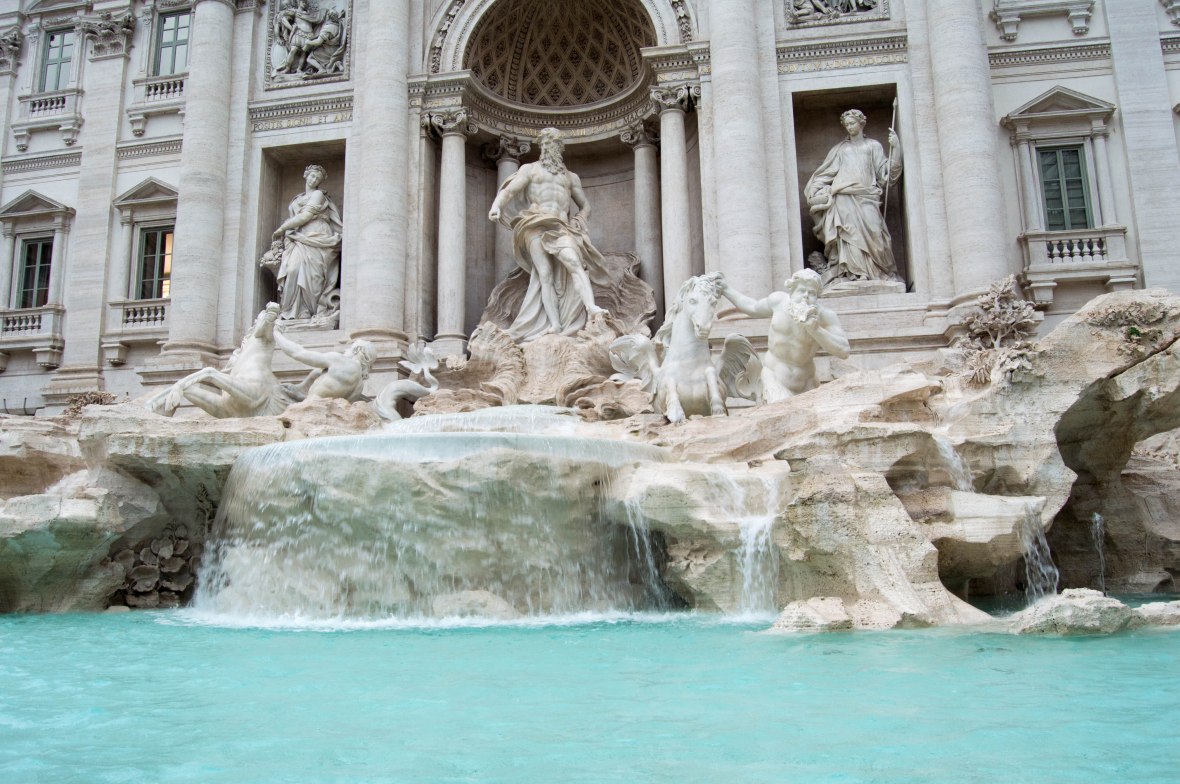 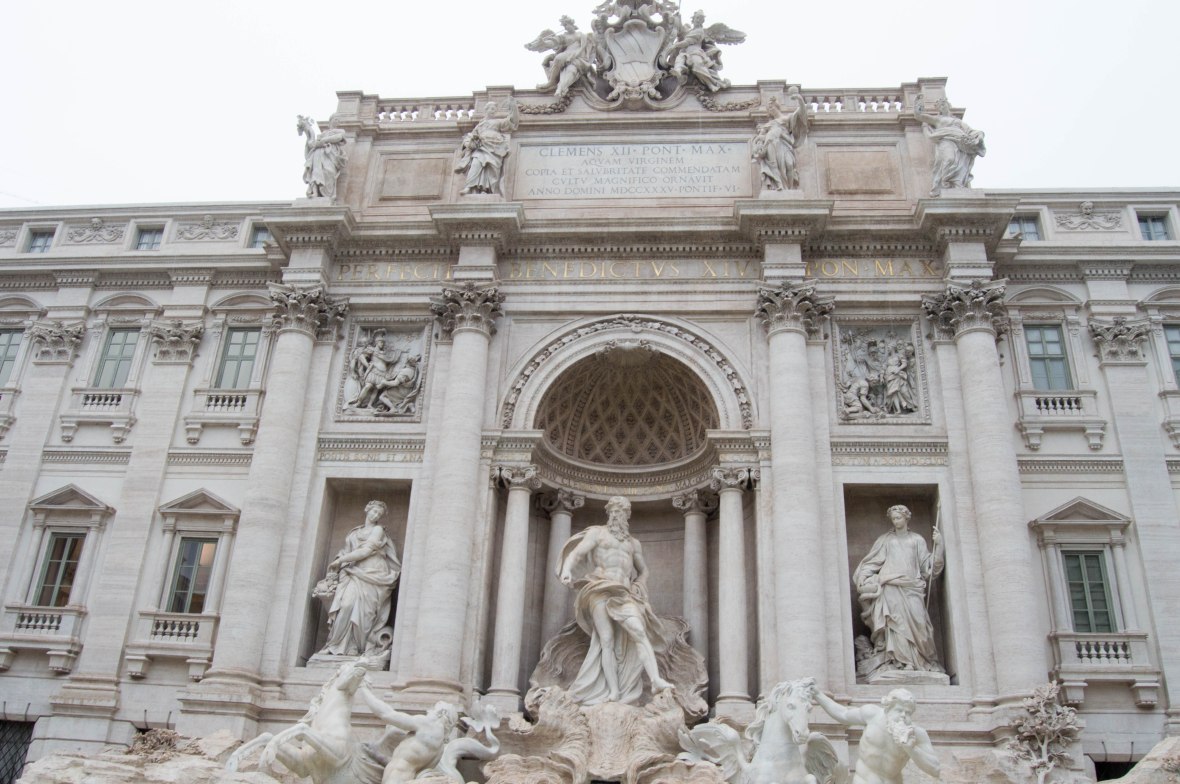 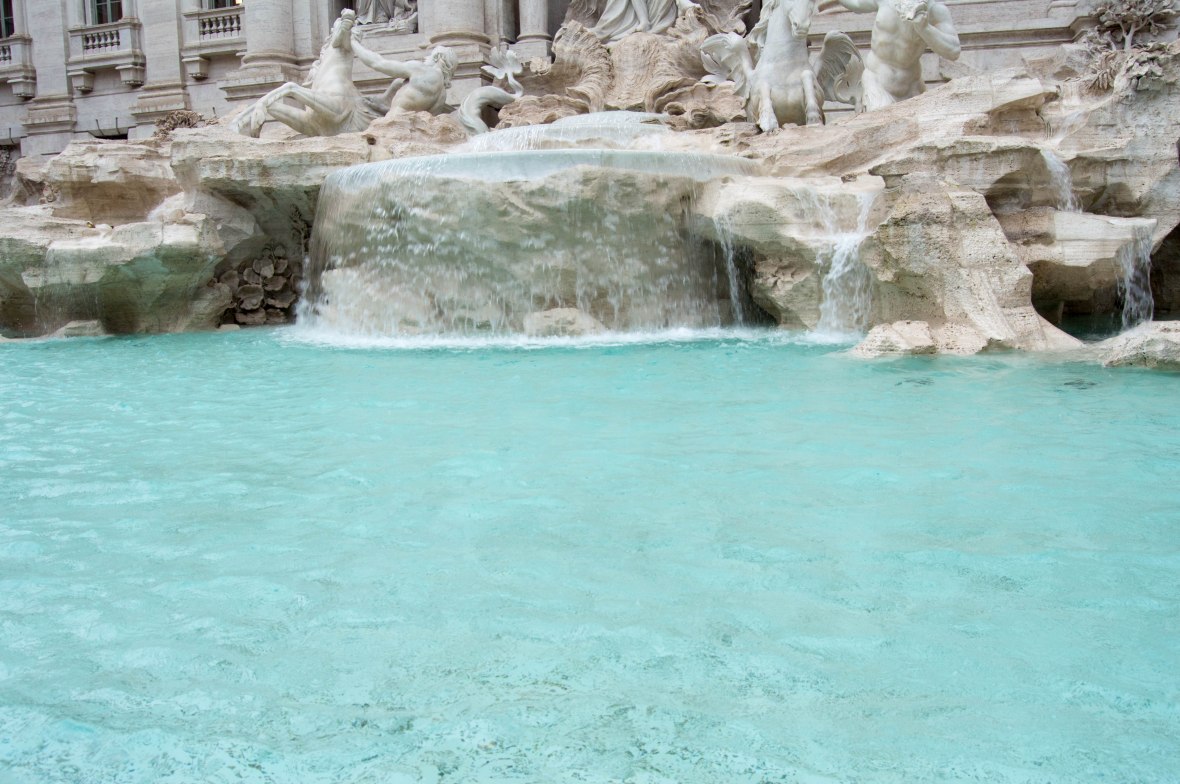 We kept walking, and after a while, with completely soaked, and freezing feet (why, oh why, did I not bring my wellies?!) we decided to stop for lunch at Nonna Betta, in the Jewish Ghetto. This place was recommended by Anthony Bourdain, according to the signs outside, so I had high expectations once again! 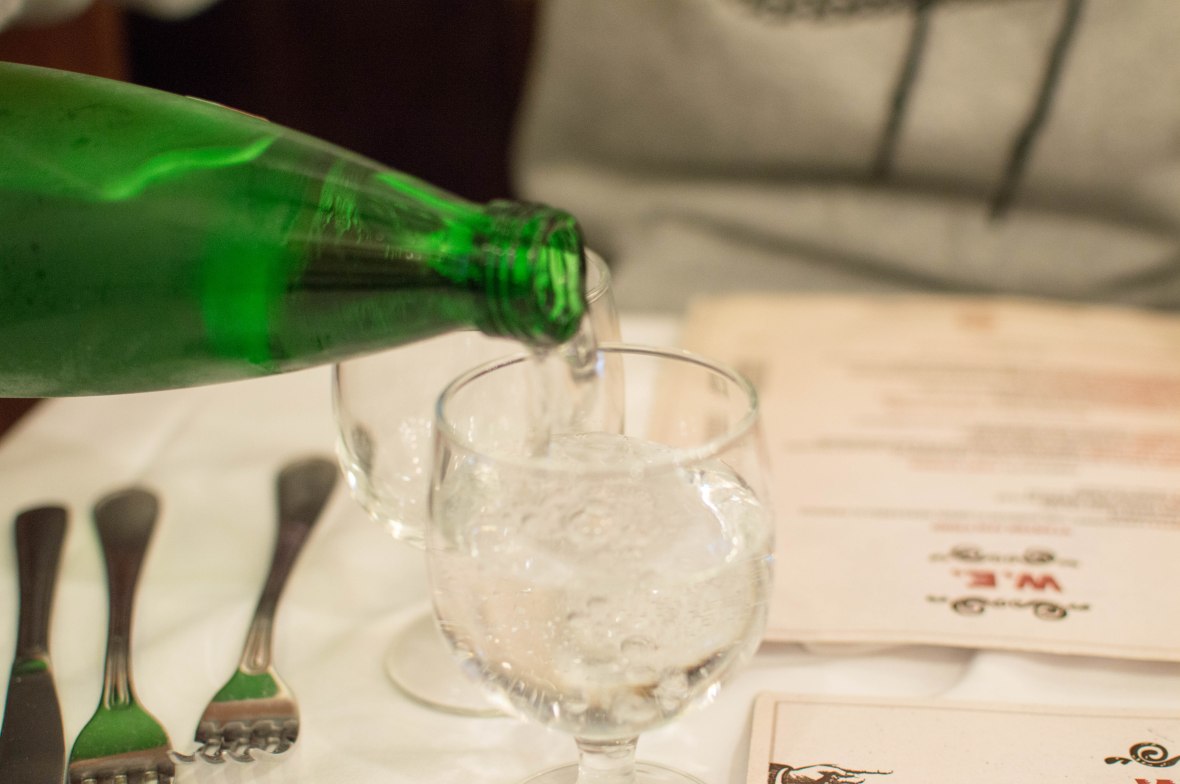 We opted for the mixed fried starter to share. Quite normal to start meals with a mixture of battered deep fried goodies. I know it doesn’t look like much but it was surprisingly good.

I really loved the courgette, well seasoned with a hint of lemon if I remember correctly. The cod was light and flaky, perfectly cooked (for a minute I wanted more, and a portion of chips, ha!). The artichoke was crispy and delicious and finally the mozzarella ball was as lovely and cheesy as you’d expect.

Mr Man’s artichoke lasagne (lasagne carciofi) – obviously after missing out at last night’s dinner we had some making up to do in terms of artichoke! Quite good in terms of flavour but personally, I always have an issue with lasagne because it’s never al dente.

I went for the gnocchi alla romana. Slightly over cooked potato dumplings, coated in egg, and placed in a delicious cheese sauce. I only wish there were more of the sauce…

For dessert we shared a cheesecake plate: 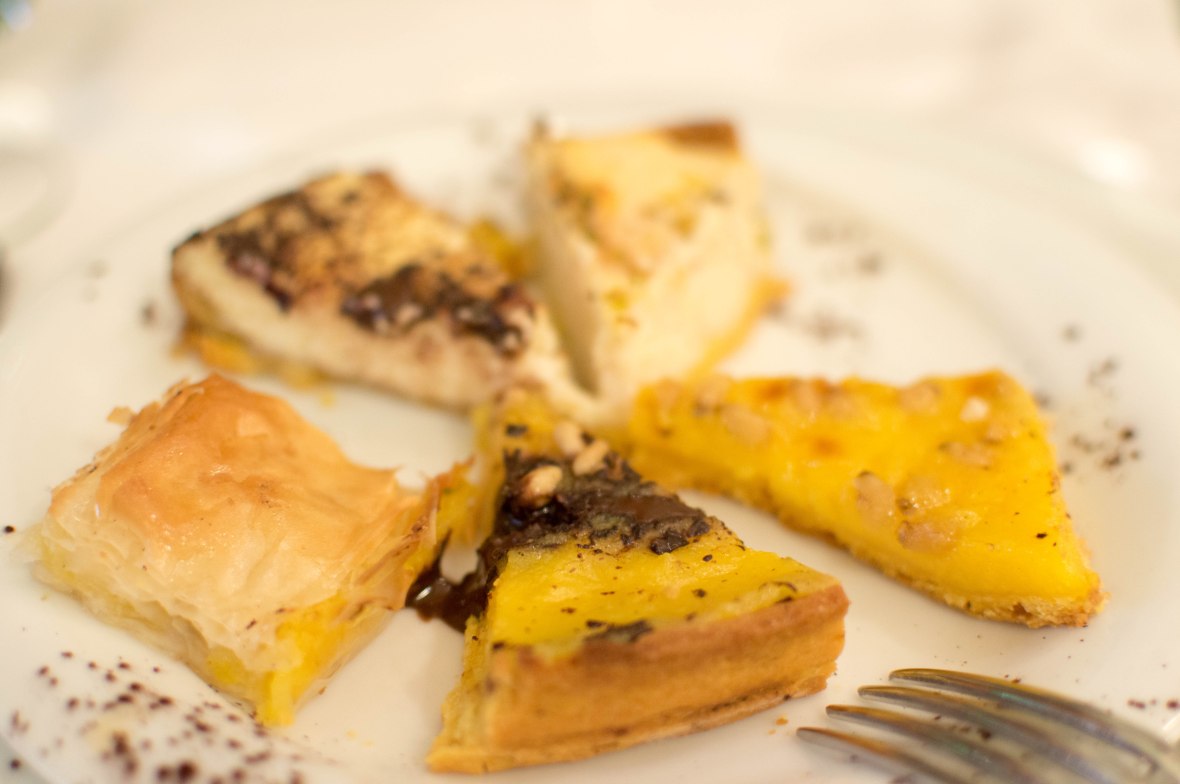 Interesting combo, everything from plain to chocolate to orange. Some were warm, some not, a few had pine nuts on top. Was good to try but I’m not sure I’d get it again. Probably ought to have ordered a coffee to go with it too.

Overall another decent meal, the best element was the starter, everything else was mediocre. Service was a bit rubbish, it was busy, but I dunno if that can be used as an excuse for how slow it was, and Mr Man ended up so annoyed at the wait for the bill he shuffled his way to the back of the restaurant to settle it.

With that onwards we went, we crossed the River Tiber…. I couldn’t help but stop and pull out my camera: 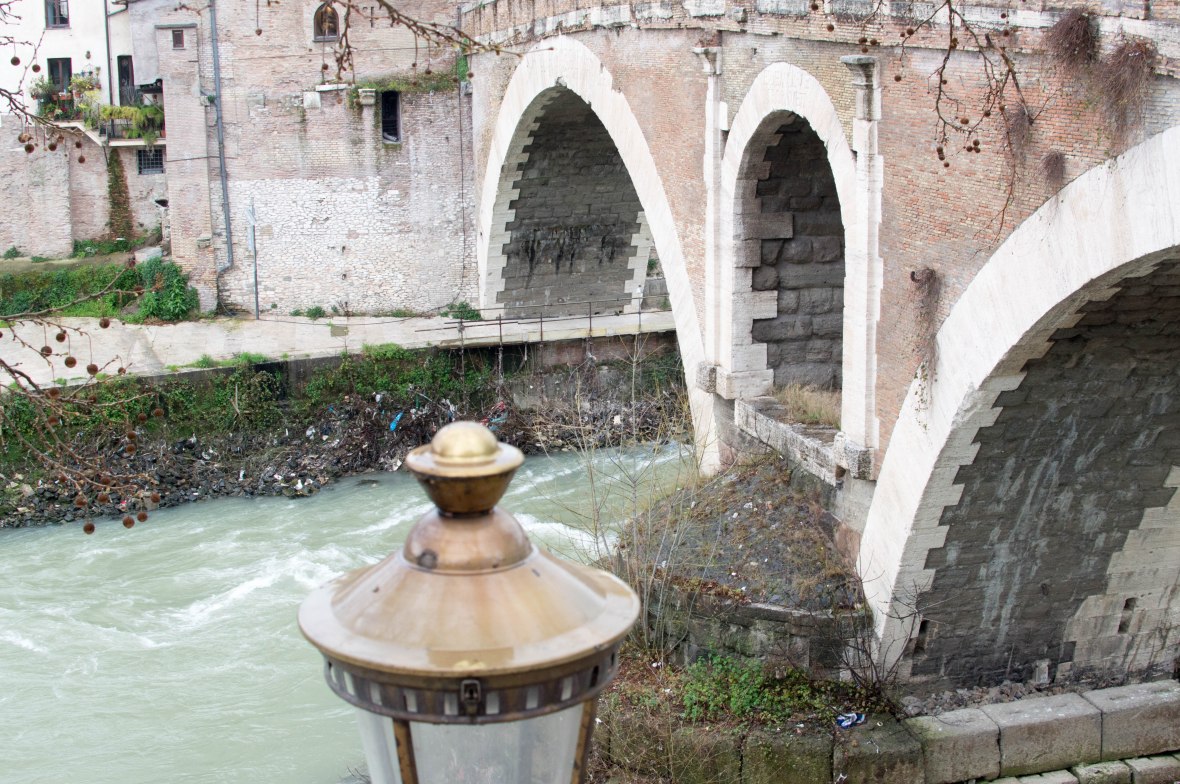 ^The edge of the little boat-shaped island, Isola Tiberina. 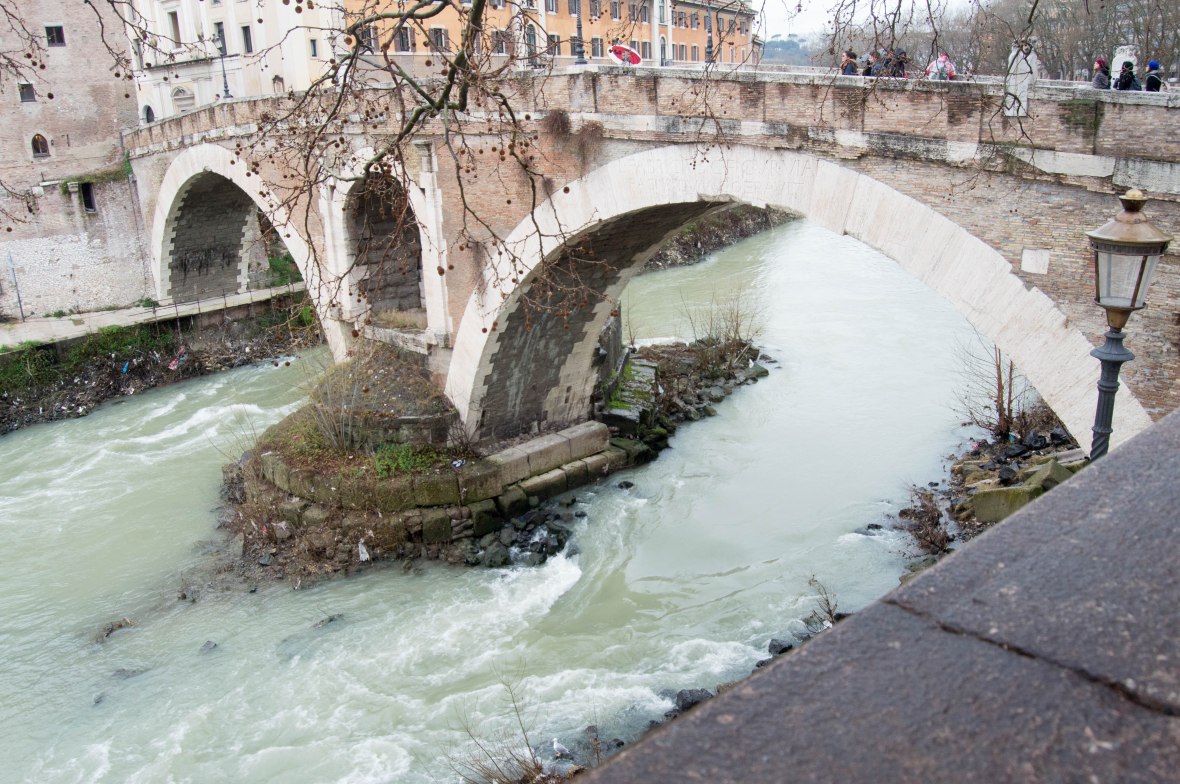 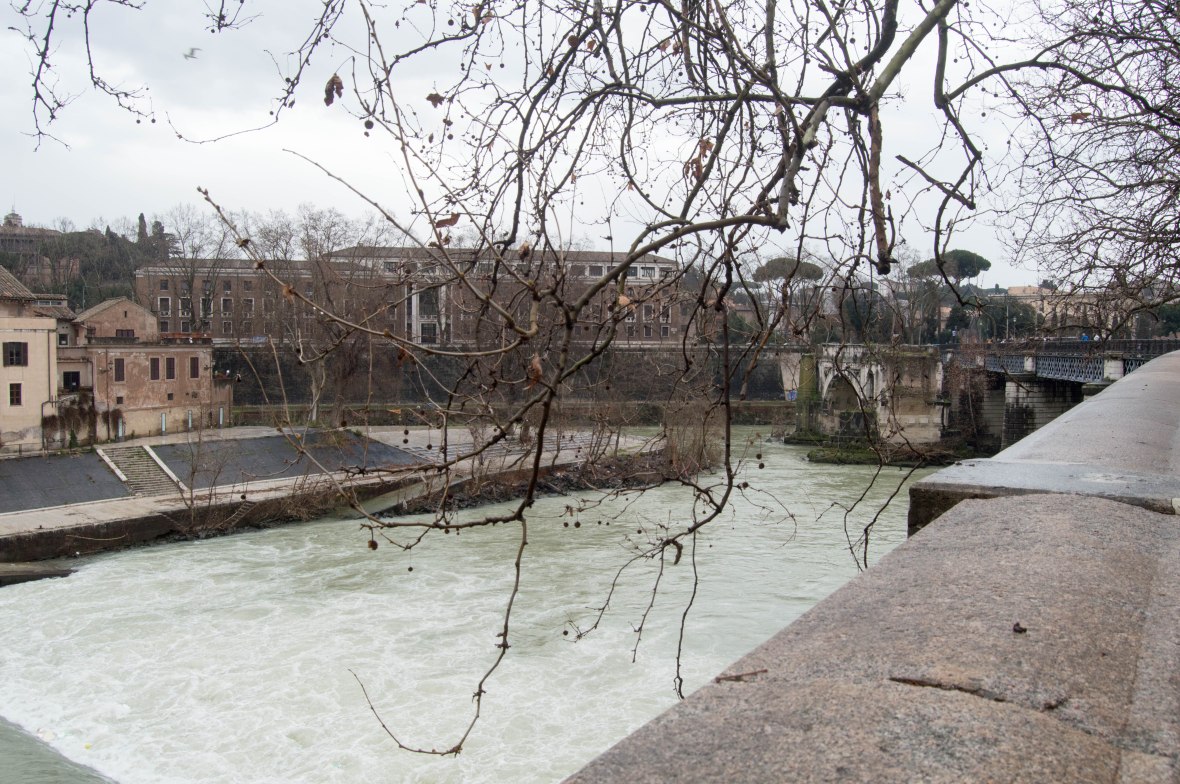 At this point, we hopped on a bus and headed back to our flat to dry off and escape the rain.

Later that night, we braved the rain and ventured out again. (In case you were wondering, I rather stupidly forgot my camera at the flat so the rest of the pics are iPhone ones…) We headed to Trastevere for some pizza at Dar Poeta. It was really busy inside and the tables were very close together, they might as well have not had the small gap to be honest, because it felt like we were all intruding on each other. Even though it was super busy, the waitress was lovely, friendly and generally quite attentive without hovering or rushing us.

We ordered the “new” starter on the menu, suppli. Essentially arancini (rice balls, with mozzarella, breadcrumbed and fried) but in a tomato sauce – great tomato sauce at that. Was nice but a bit soggy. Glad we only ordered one to share. They tasted like they were made hours ago and weren’t very fresh.

^ Mushroom calzone, really yum. Well cooked and nice and cheesy with a generous amount of mushrooms. However, after the first few bites the lack of tomato sauce kind of ruined it for me…

Mr Man went for the potato, pesto and tomato pizza. Nice bit of carb on carb action right there. I feel like they could have cooked down the tomatoes like I did on my white pizza for some extra flavour… There was a decent crust but just not enough chew to the dough. (So I read online that pizza in Rome is nowhere near as good as that available in Naples – as far as I’m concerned, that’s next on my Italian travel hit list now! In fact, I had planned a day trip to Naples from Rome for us, but the rain was so bad for the first few days, I had to ditch it. Sucks.)

For dessert, we ordered this monstrosity. Nutella and ricotta calzone.

Just look at the filling, oozing out as soon as we cut it open.

Nice presentation, definitely turned a few heads as the waitress brought this over to us. But, possibly too much nutella? (Am I wrong for saying that, can you ever have too much nutella? Is that even, you know, possible?) Also, on that note, why is there not a dark chocolate nutella available, I think that would have been a winner in this dessert, cos for me, it just quickly became too sweet and sickly despite the ricotta. Mr Man, on the other hand, impressively, finished his half.