On day four we had a late start. Nice long lie in after the hectic day the day before. I swung my legs out of the bed and attempted to get up. My legs basically screamed, NOPE! OH NO YOU DON’T, no freaking way lady, not today! Let’s just say it was a comical sight and leave it at that.

Once I got myself together and convinced my legs that they shouldn’t be so damn rebellious we got on with brekkie. Huge, juicy peaches out in the balcony. Firstly, if you’ve read this blog before you’ll realise peaches are one of my favourite things, ever. These ones in particular were incredible. The one thing I can’t get over, is the sheer size of these things! Probably double the ones in the British supermakets sell. Here’s a picture: (just pretend you can’t see the various random pairs of shoes on the floor, okay? Thanks for your co-operation in this matter.)

Anyway, after exchanging a bit more money at the grand bazaar we headed out for a wander, so much to see on these cobbled streets! We wound up close to the spice market and opted for a little place called Lezzet-i Sark for lunch. I think this is one of my favourite places we had the pleasure of eating at on this trip. We headed upstairs to be seated. It’s located on a chaotic street as you can see from the shot I took from the window:

The menu was pretty simple with various kebabs and I chose (surprise, surprise) another chicken shish after having had an amazing one the night before and wanting a second. Mr Man went for a mixed plate. The waiter was really attentive and helpful despite the language barriers and we were given an unexpected complimentary starter and fresh warm bread – absolutely delish!

Not sure what this is called but within minutes we cleaned the plate – a medley of cucumbers, tomatoes, onion and red peppers in a sweet and sour sauce. AMAZING.

This chicken shish, while not quiiiite as amazing as the night before was still damn bloody good. That said the bread and tomatoey bulgur wheat blew the one from the night before out of the water. There was also the standard onion and parsley salad with sumac and some more familiar shredded lettuce thrown in.

I remember his comment, it was something like, “now this is what I’m talking about.” Each element was perfectly cooked, the only downside though, was there was an awful lot! Since when was that a bad thing, I hear you cry?! Well in general, contrary to many of the restaurants in London where you can’t finish a sizeable amount of your food, all the meals we had in Turkey were perfectly sized, leaving us comfortably full with room for dessert… This plate, however, slightly broke that rule.

We noticed beneath the glass covered tables, there were little notes from previous happy customers, all in Turkish so no idea what they said! But, one thing stood out amongst all of these was reference to something called kunefe, hell, there was even a acrostic poem in one!

Turns out this was a dessert that they were well known for so who were we to say no! This little baby showed up on our table a while later:

It might not look like much but I assure you, this was the best dessert of our entire trip. I’m dying for some more, I really wish we’d had time to go back for another! =(

It’s a syrup soaked, cheese based, buttery, shredded pastry topped with pistachios. (soaked may not be the best word as it wasn’t too sweet, in fact it was just right, the perfect balance… but it’s Tuesday night, and I feel like it should be Friday after a crazy busy couple of days at work AND now I’ve got serious cravings!) The whole lot is toasted so it was nice and warm and the cheese was lovely and melted. I think it may have been a cheese close to a mozzarella. Sounds weird as in my mind I associate it with pizzas and the likes but it really worked here. These guys know what they are doing. Yummy! We left this shop with massive grins on our faces after that amazing kunefe. On the way out I took a quick little picture of one of the chefs making these little wonders (he was making them outside the shop front):

After a quick stop at the tourist information centre – there are a few of these dotted around, and they are helpful but abrupt in guiding you on what to do and how best to travel to places. They also have a wide array of maps and pamphlets so it’s worth a quick gander – we decided to check out Miniaturk. We walked over to the bus stop and realised we’d be waiting quite a while as buses ran every hour and we’d just missed ours, so hopped in a cab instead.

Miniaturk is a cool (and cute) little set up of miniature models, 1/25th scale (if I remember correctly), of Turkey’s most famous landmarks and architectural wonders. Such a cool place to check out and a great place to get some pictures, even with a crappy iPhone camera. Here are a selection of the ones I took: 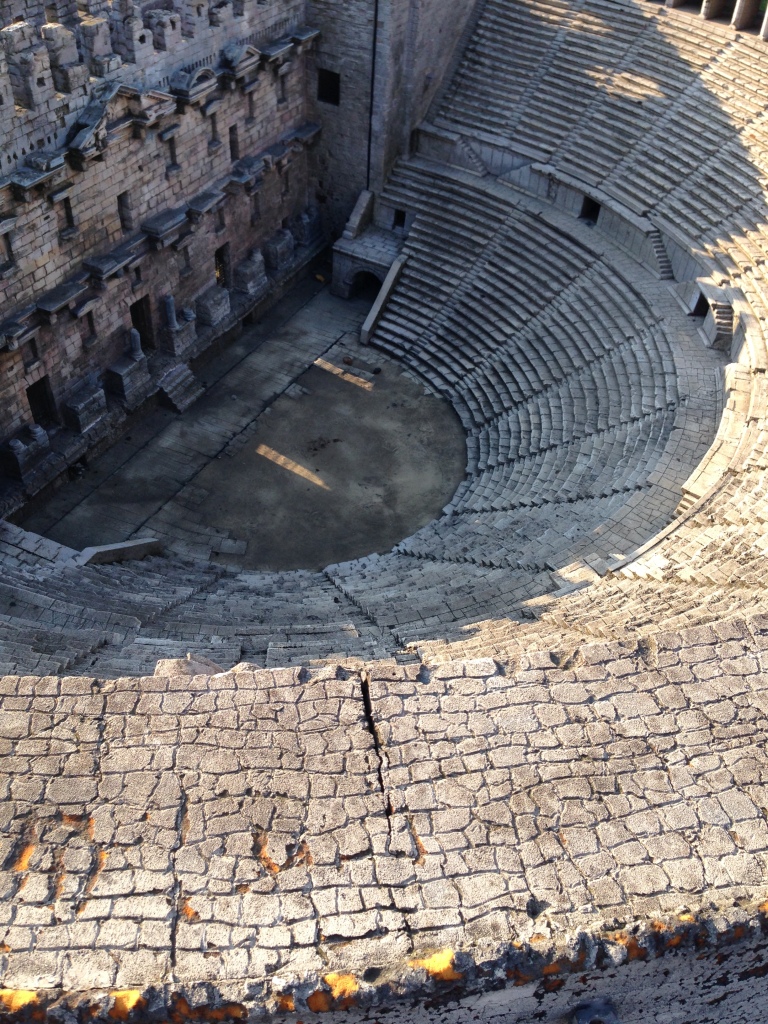 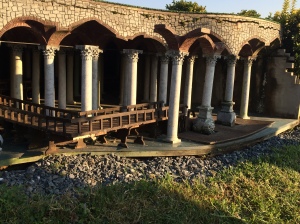 Just fueled my desire to go and visit the rest of Turkey if I’m honest! After an hour or two of checking these intricate little models out we decided to go and watch the sunset in one of our favourite spots from our previous trip nearby (well, a short cab ride away). We arrived at Pierre Loti Cafe to find it heaving! We sat down and enjoyed apple teas with these wonderful fried potato swirls: 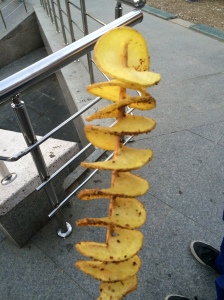 We then pottered off down to the viewing platform as our seats weren’t in the best of locations to watch the sun set. Unfortunately, because I’m occasionally a dimwit, I apparently failed to take a picture of this. So uh, here’s one I took from the previous trip. Now, just imagine the sunsetting here. With pinky shades streaking the sky:

(EDIT: I had a proper look through my phone this morning on the way to work and I realised I DID take pics! Clearly too tired after work!) 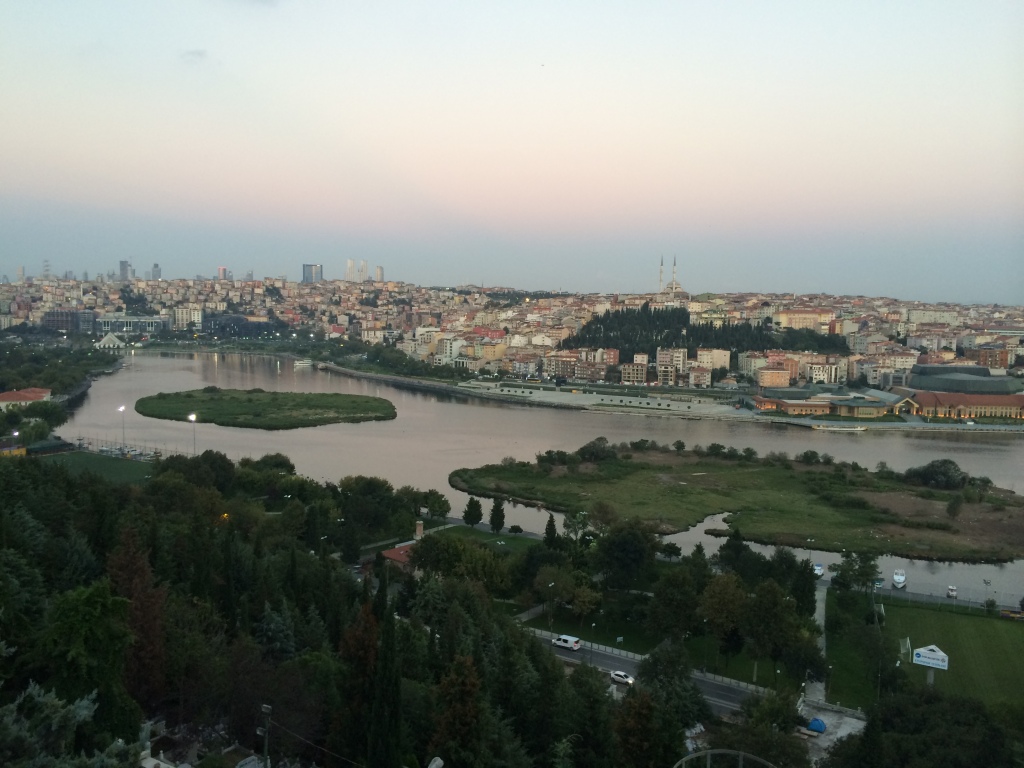 We popped on down the cable cars to the bottom before running to catch the last ferry back to Eminonu, my poor legs yelping like wounded puppies all the way but never giving up – Perfectly timed!

Before dinner we decided to keep up with the trend from the past few days and continue punishing our legs and walk. Although we were rewarded be beautiful scenes such as these from the tops of steep hills we climbed, we very quickly got tired: 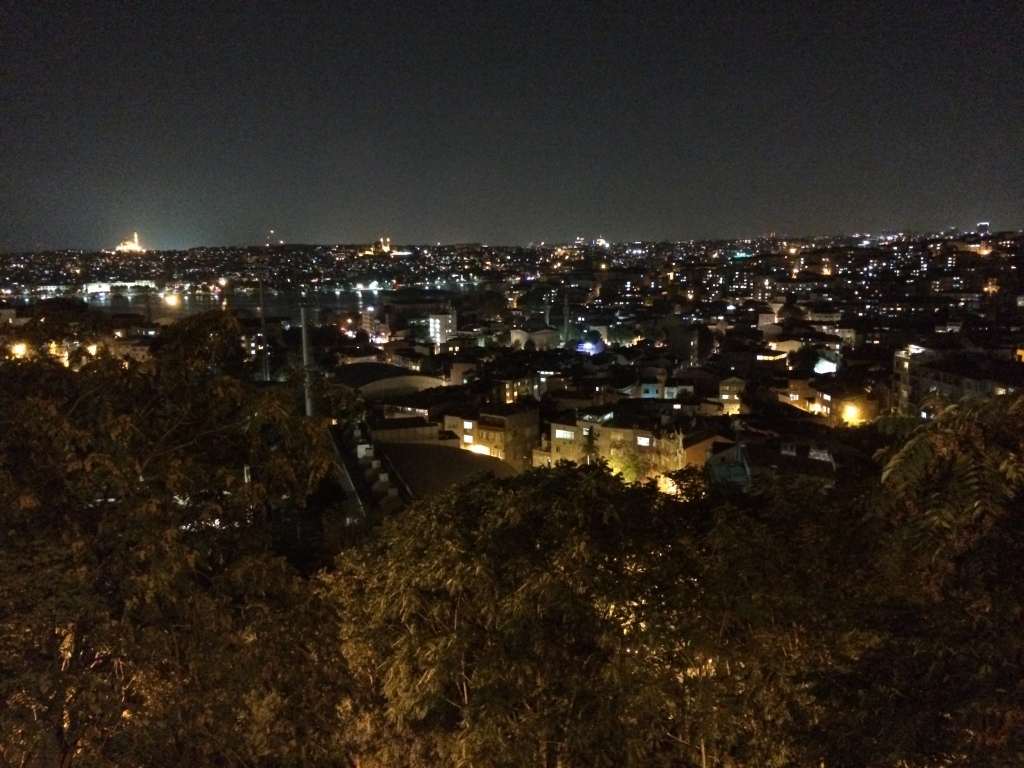 We stepped into a place called Durumzade for dinner. Their specialty are wraps – and bloody good ones at that! You can pick from a variety of meats, in double or single portions, rolled up nice and tight in a toasted crispy wrap (durum) bread with a tomato, parsley and onion salad. I’ll stop typing now and let you see for yourselves:

Seriously good stuff – my one single issue was that mine (left hand side) was sliiiiightly over done and so a tad dry. A little squeeze of lemon could have easily rectified that but I won’t lie, I very much enjoyed this little number, and it was super cheap! In case you were wondering, I opted for the chicken (tavuk) and Mr Man chose the adana kebab (right hand side).

With our stomachs sedated, we walked on to Taksim on the prowl for dessert and opted for Simit Sarayi. I’d seen a number of these shops on our long walks and it struck me as a popular chain. We decided it was high time to give it a go. I wish we hadn’t bothered. Staff were rude, “ONLY one piece of cake?!” like I was committing treason or something. Yes, just the one, like I politely ordered. (Is that an outrageous request?!) The guy who was making our turkish coffees had to do it three times over, and took forever each time, like literally two minutes each time because he didn’t have a clue what he was doing. Even then, they were so bad we had to return them. We were also sold a preopened bottle of water, uh, what’s that about?! Not cool. The guy on the till was abrupt and had no manners. Finally, what I was hoping would be their saving grace, the cake we chose, was just plain bad (profiteroles on top were stale, and frozen – not sure how that came to be, and textually it had so many issues…) To top it all off, the bathrooms were minging too. Just saying, I’m bloody well glad we only bought one slice!

After that, we finally put our legs out of their misery and headed back to the hotel before starting all over the very next morning ha! I’ll have the next installment up by the end of the week / Saturday, thanks for reading. Also, while I have your attention, I’ve managed to set up a fancy subscribe box thing at the top right hand side of the page, feel free to dump your email address in there and you’ll get an update to whenever a new post goes live. Thanks!

Until next time, good night!